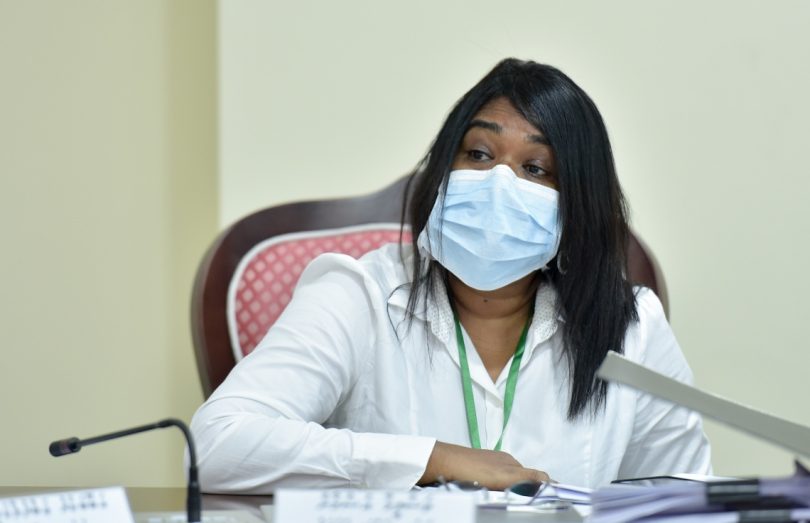 Ministry of Health revealed on Tuesday, that Dubai’s Executors General Trading LLC have guaranteed that the 75 ventilators procured from the company for Maldives’ COVID-19 response would be delivered on August 30.

Speaking at the Parliament’s Public Accounts Committee, the ministry’s Director-General Thasleema Moosa stated that communications between the company and the Health Ministry were ongoing.

“They assured that the ventilators will be sent. [We] have [record of] the exchanges”, said Thasleema, who recently took over the task of acquiring the ventilators, following the authorities’ probe into the issue.

Health Ministry’s Financial Controller Ahmed Aslam was previously handling the communications with Executors General Trading, but he is currently under suspension along with the ministry’s committee, regarding the ongoing investigations into the recent audit report which highlighted certain violations in the ventilator procurement deal.

On 16 August, the Auditor General’s (AG) Office released a compliance audit report on the Health Ministry’s spending of state funds for the COVID-19 response, which revealed that the ministry had spent millions in violation of the Public Finance Act, whilst claiming to procure ventilators and other medical supplies.

Under the controversial deal with Executors General Trading, the company was tasked with delivering the ventilators within 29 days of receiving the full payment of MVR 34 million. The state has already paid an advance payment of MVR 30 million, without a guarantee, covering 90 per cent of the total cost.

Till date, Maldives has received only 10 of said ventilators. However, a team of doctors, nurses and biomedical engineers have concluded that these ventilators, that do not fit the agreement specifications, are not suitable for COVID-19 treatment.

According to Thasleema, the supplier assured that they will send WEINMANN brand ventilators in place of the 10 ventilators, which the Health Ministry has now rejected.

Regarding the concerns over delays and receiving ventilators of unsuitable quality of ventilators, the now-suspended Minister of Health Abdulla Ameen iterated that there was no room to conclude the ventilators will not be delivered since the ministry had been in continuous communication with the supplier.

“When the rumours about the ventilators surfaced, [we] made extra effort to verify. [We] called them, rechecked the brands, and acquired photos and videos of [the ventilators] in the factory”, he said.

Director-General Thasleema noted that the Maldives has acquired the 50 ventilators purchased from MedTech Maldives Pvt Ltd, but has yet to receive the 20 ventilators procured from Naadu Pvt Ltd.

Although the Auditor General’s report stated that discussions took place between Ameen and World Health Organisation (WHO) representative to Maldives Arvind Mathur in an unofficial capacity, Ameen has maintained that the communications were official.

He further claimed that the health ministry’s employees carried out the transactions in line with the Public Finance Act and the permits granted by relevant authorities, to most swiftly procure the supplies necessary for the COVID-19 response.