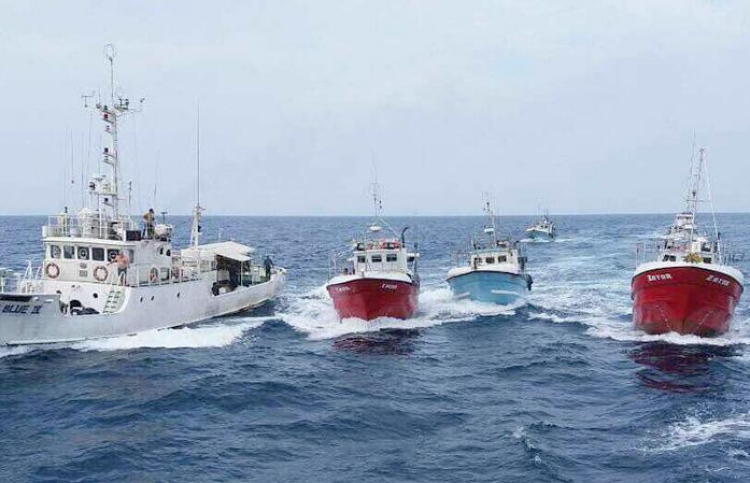 The four Sri Lankan vessels that were spotted off G.Dh. Kolamaafushi on November 18, 2017.

The fisheries ministry declared on Tuesday that the Sri Lankan vessels that were spotted in Maldivian territory last Saturday had entered the country illegally.

The fisheries ministry’s director Adam Ziyad claimed that it had not given approval to the Sri Lankan vessels to enter Maldivian territory, despite the Coast Guard claiming that they had had permission.

“After some local fishermen stopped the Sri Lankan vessels, the Coast Guard went to the scene and let them go after claiming they had the necessary documents. But the vessels had not acquired the permits issued by the ministry – they would not have had a permit,” he claimed.

According to Maldivian law, no foreign vessel has the authority to enter the internal waters of the country without prior authorization from the government. However, foreign vessels have the right of continuous and expeditious archipelagic passage in the sea-lanes designated by the government for international navigation.

“We usually give permission to the foreign vessels that navigate through the zero degree and one-degree channels – by law, [foreign vessels] have to have a permit to travel through these waters.”

The Sri Lankan vessels were first spotted by a group of local fishermen about 10 miles away from Kolamaafushi in Gaafu Dhaalu Atoll.

After the incident was reported to the Coast Guard, they had searched the boats and let them go after claiming that they had the required documents.