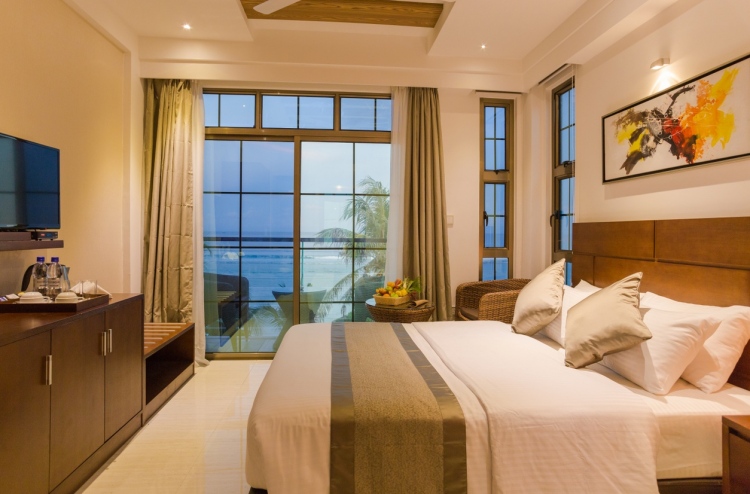 The original Dhivehi article, by reporter Ahmed Abdullah Saeed, was published on the Mihaaru.com website on 20 February, 2017.

When I say small businesses in the tourism sector, what I mean is small businesses in the huge tourism industry.These days, if you want to develop a tourist resort you would need dollars in the millions or you would need “dollar millionaires” to back you. Eligibility for bank assistance is also only if you have sufficient funds to spend in hand. For these reasons, it is difficult for a commoner or a middle income earner to penetrate into the tourism sector. Next to impossible would be a more suitable word. However, when Maldivians saw how the tourism sector kept flourishing and how lucrative it became, they tried to penetrate into this sector in many different ways. Like by operating guest houses and sailing yachts.

When yacht cruising or liveaboard business started, yacht sailing permits were issued only to Maldivians. What resulted was that foreigners partnered with Maldivians and got into the yacht operating business. When the yacht operating business picked up, demand by guests rose too. So, in order to cater to these demands, the Maldivian government decided to issue permits for foreign investors to import and operate bigger vessels – those vessels equipped with more beds. Small bed capacity vessels were still an exclusivity reserved for Maldivian owners. A foreigner will not be granted a permit even if the foreigner owns the type of vessel that only a Maldivian is eligible for, and, though the vessel belongs to the foreigner, unless the vessel is registered under a Maldivian, or a leasing paperwork is done under a Maldivian, it would not be able to operate.

However, now, due to rapid growth of the Maldivian tourism industry, and when millions of dollars are needed to invest in order to target and attract the wealthy from around the world, operations and investing has gone entirely to the foreigners, and Maldivians have slowly lost their entire grip on the tourism sector. The Maldivians gets only a tiny slice of the tourism industry’s cake. The taxes levied under different names by the government are set aside.

The investment opportunities for foreigners should only be given in areas where that Maldivians are unable to invest. The government talks about big investments. However, when it comes to the practical implementations of different things, we cannot see if the citizens are taken into consideration. Don’t get me wrong. I agree. Government has dredged lagoons; has built jetties; is working on improving electricity. Is trying to solve water problems. And is also trying to solve and come up with measures for waste management.

The citizens don’t care as to where the money is coming from. If a different government comes to power and if they fall flat with debts, for the average person, it is not an issue. As long as money is there to spend on improving their basic needs. Wherever the money is taken from is no issue, as long as the citizens’ needs are fulfilled. However, I feel that, even though the citizens benefit, these investments are made to win votes for the next election. These days we are plagued with developing airports in constituencies of parliament members who are in the “good books” [of the Government]. Two airports for a population of 15000 and three airports for 20000 inhabitants. Will there ever be a benefit from operating them? From where do we recover these useless expenses? From the tax money we pay to Maldives Inland Revenue Authority (MIRA)? If anyone is reading this column, please come with an answer to this. I am now certain that the concerned authorities do read this column sometimes. As this column sometimes disappears from the newspaper.

Very recently there has been a relaxing of the law for foreign investors who are in the yacht operating business. Previously, a foreign investor can register a yacht operating business only if they meet 40 beds for 20 rooms criteria. Now they can register if they had 30 beds for a 10 room operation. My question is:  what was this relaxing for? Is it to pave way for an opportunity to a particular [favoured] Maldivian to invest with a foreign backer? No! No! I don’t mean that. I only asked a question. This government has always been saying they bring in big foreign investments. I welcome such investments. But only if they don’t sell part of Maldives along with the investments. Don’t sell our independence. Even though they are of the same religion as us, we don’t agree to this.

The guest house business is something Maldivians developed and operated with the little that they have and with the little money that they have. At first, the government policy was to establish a quality control system: prohibiting exploitation of tourists and taking advantage of them. However, the current guest house development laws and regulations that the government has made seems to be heading in a different direction. Again, it is paving the way for the rich. It is due to high land rent. Rent increases because of the tax levied on these “small” businesses will make them uncompetitive and also lose the income they earned previously, as they cannot market as they used to. The government needs to give up such control on these businesses. Instead, the government should guide them. Be a pilot who navigates. Protect them. This is the way of a democratic society, where democracy prevails.

We have buried our democracy. Independent institutions are also buried down. We are unable to bury the independent judiciary as the undertaker is nowhere to be found. Even though we cannot attend the funeral there are some who still believe they can participate in its wake. However, they live in the United Kingdom. I wonder if people believe in a wake nowadays.