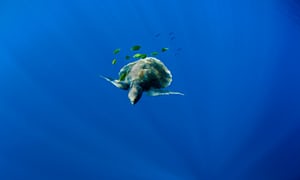 One of the world’s smallest turtle (some sources claim smallest is Kemp’s ridley) is also the most abundant, yet to me, it seems to be the hardest to find! I’ve dived on reefs across the tropics, with camera in hand, and have yet to encounter a single olive ridley. I’ve seen scores of hawksbills and greens, and even a few loggerheads, but the olive ridley, with its distinctive heart-shaped shell is an animal I’ve only come across in rescue centres. Is there a reason why turtles are facing different threats, based upon their species? Or is it more complicated than that? I reached out to Martin Stelfox, Founder of the Olive Ridley project (ORP).

“Olive ridleys are extremely rare to encounter when snorkelling or diving,” Stelfox told me, and I couldn’t help but agree, they are notable by their absence on the Maldivian reefs, so beloved of holidaymakers and researchers alike. Green turtles, such as the population at a wellknown diving spot called Kuredu Caves, are easily studied and even part of the ORP ID programme. Each turtle has a unique set of markings on the cheek and carapace, scuba divers can upload their turtle photos to add new individuals to the list and, get to name them too. Seeing greens or hawksbills while diving in the Maldives is pretty much the norm. The olives are much harder to find.

“Olives tend to be oceanic in nature, meaning they spend a considerable amount of time in deep water, foraging in deep habitats, looking for benthic organisms such as crabs and lobsters,” Stelfox says. He confirms my experience: hawksbills and greens favour shallower reef habitats. Primarily hawksbill turtles feed on sponges, with adult greens grazing on sea grass beds in the shallows. I have heard dive guides say that the less ecologically-minded resorts in the region will remove the sea grass meadows, which jeopardise the “white sand and turquoise seas” reputation of the resorts.

Is this why olives are at risk from entanglement in discarded fishing nets? Is it their life spent roaming further and in more open water that puts them at risk?

“In the Maldives, the majority of turtles we see entangled in floating ‘ghost’ nets are the olive ridleys. However, depending on the location and fisheries operating, this changes by region. For instance, fishing gear that is heavy and gets caught on coral reefs may be more likely to entangle greens or hawksbills. It’s just that olives are oceanic, putting them at a greater risk of interacting with floating debris, including ‘ghost gear’.”

Coming across discarded fishing gear, either under or below the surface is sobering. These pictures show a mass of old net, rope, cement bags and assorted plastic rubbish, tangled into a mass that has potentially wandered the ocean for months. This mass was brought to shore and disposed of by a nearby dive centre. Two turtles were cut free, the remains of two others were found, all were olive ridleys.

Stelfox, who is completing a PhD on the impact of ghost gear in the Maldives at the University of Derby, suggests it’s hard to estimate just how much debris is in the Indian Ocean. “There are very few studies currently underway,” he said. “Giving estimates of gear loss is also a difficult task. We cannot estimate right now, in 2009 the UN estimated around 640,000 tons of gear is lost globally every year, and the figure does not include gear loss from illegal, unreported and unregulated fishing.”

“Bycatch is an issue that may be responsible for increased mortality rates of olives, however ghost gear has not yet been quantified in the region, so it is hard to say. The difficulty with estimating mortality rates from ghost gear is that most of the time the events go unnoticed and may happen out at sea.”

Add the threats to nesting areas from development and you have a combination of factors. Stelfox identifies coastal development on the east coast of India as severely threatening the species, despite the turtles’ schedule 1 status under Indian conservation law. “Despite protection there is little enforcement,” he adds.

Given the threats from discarded fishing gear, I asked which fisheries, if any, should consumers avoid? Should we consider eating less fish?

“The most important steps consumers can take is to become educated on the fisheries they are buying into and understand where fish comes from before buying it. If you cannot trace your fish back to a specific fishery or country, or you are unsure how the fish was caught, then you should avoid making the purchase. The majority of fish caught using nets will likely also contribute to the ghost net and bycatch problem to some degree.”