Tourist arrivals to the Maldives increased by 5.9 percent as traditional European markets offset a decline in Chinese holidaymakers.

According to the tourism ministry, 892,025 tourists visited the Maldives between January and August this year, up from 842,635 for the same period in 2016.

The European market made up 45.9 percent of all tourists who visited from January to August, the figures released Wednesday showed.

Russian visitor numbers increased by 35 percent, with 38,936 visitors compared to 28,835, and Italian tourism increased by 22.8 percent.

German and French visitor figures inched up, while tourist arrivals from the UK edged downwards 0.4 percent.

The Chinese market – the largest single market for the Maldives – has continued to decline resulting in a slightly negative growth for the Asia and Pacific region.

There was a 9.1 percent slump between January and August 2017, with 209,514 Chinese tourists visiting the tropical destination.

Occupancy rates in resorts have however declined with resorts unable to match demand with the increase in facilities and bed capacity — 71.7 percent until September compared to 75.1 percent last year.

There were 11 new resorts opened last year and four were opened by the end of August this year.

Yameen said transport was the major challenge to improving tourism.

“As a solution to these problems, this administration has hired investors to develop domestic airports. After the redevelopment of Velana International Airport, the airport will be able to cater to 7.5 million travellers.” 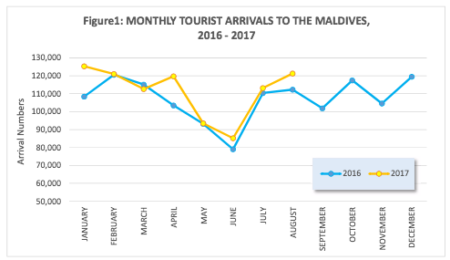