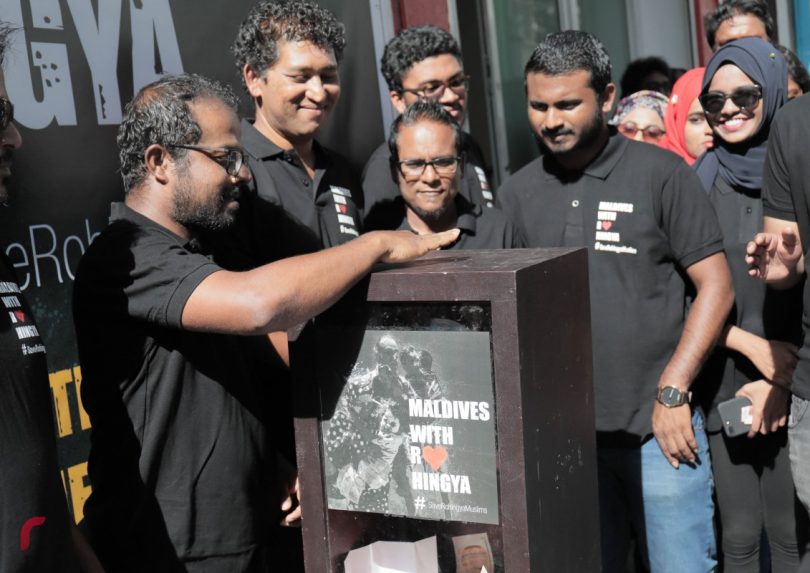 A ceremony was held on Sunday evening, in front of RaajjeTV main office in the capital Malé City, where the station’s staff members contributed to the ‘Maldives with Rohingya’ fund — Photo by: Mohamed Sharuhaan

The 24-hour telethon will end at 2:30 pm Monday, and its aim is to provide assistance to the Rohingya Muslims, described the “most persecuted minority group in the world”.

As stories of the Burmese army’s attacks on Rohingya villages- rapes, murders and burning of villages- increase, RaajjeTV said that it became clear that the Rohingya Muslims need the most attention and care right now.

The station said that it decided take the initiative and use its platform, so that the Maldivian people can help them.

A number of individuals and companies have taken part in the telethon, including island councils, restaurants and taxi centers.

A ceremony was held on Sunday evening, in front of RaajjeTV main office in the capital Malé City, where the station’s staff members, all in the official event t-shirts, contributed to the fund.

After contributing, RaajjeTV’s chief operating officer Hussain Fiyaz Moosa called on the people to go and make contributions “to help [our] Rohingya brothers and sisters”.

Even though the telethon was initiated by RaajjeTV, the donations will be handed to the Rohingya Muslims, on behalf of the people of the Maldives.