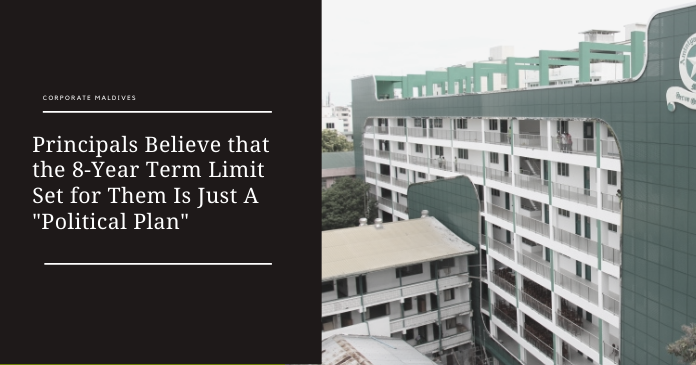 The Maldives has declared that a principal cannot stay in one school for more than 8 consecutive years. This condition by the Civil Service Commission has been published to the official website of the Ministry of Education.

The purpose of this decision is to ensure that the schools have a qualified and effective principal and to strengthen the operating system of public schools. It is expected that this will become a solution to the problems faced due to having the same principal for a long time. Although this led to disagreements by many principals, the majority of the public seems to be in favour of this.

According to a former principal, setting a term limit for principals is extremely effective. “Especially in Male`, schools are led by the same person for many years. This prevents the actual development and inflow of new ideas into the school.”

Further, the new change states that the school principals work will be decided by a committee. Several concerns regarding this by both professionals and citizens state that it makes it easy to make things political. “When i was a principal, I worked at places that were close to my heart. By making a committee decide where they work, the connection is lost. The dedication might not be there.”

While exploring the topic of the importance of having an effective principal to lead schools, another significant problem that needs to be noticed is the high turnover rate of principals. For example, in the US, about 20% of public school principals leave their positions each year.

Several studies find that principal turnover is associated with both higher rates of teacher turnover and lower student achievement gains in subsequent years and may have even more negative effects in schools with larger numbers of low-income and low-achieving students.

According to research, principal departures follow a downturn in student performance. Achievement continues to fall in the two years following the installation of a new principal and then rises over the next three years. Five years after a new principal is installed, average academic performance is no different than it was five years before the new principal took over.

There have been many views in favour of this matter as well, especially from teachers. In fact, some opinions indicate that even 8 years is too long as a term limit for principals!

Former Education Minister Shifa Mohamed says that it would result in advancement as staying at one school for several years lead to failure of noticing some problems. She said that she supports giving the chance to find solutions to those problems to another qualified person.