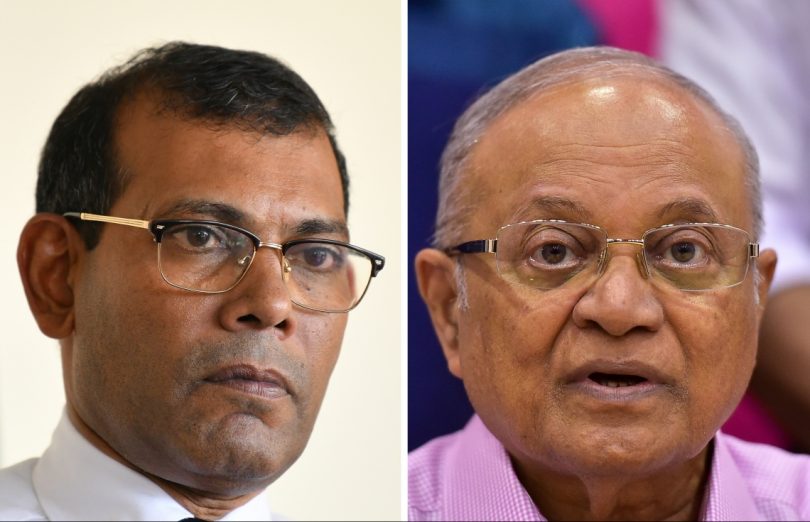 The longstanding opposing stances between former presidents Maumoon Abdul Gayoom and Mohamed Nasheed, regarding the governing system for the Maldives, came to a head-on social media this Monday.

Gayoom, who has long stood for the presidential system, also noted that the majority of citizens had voted for the aforementioned system in the 2007 referendum vote.

The referendum saw 62 per cent of voters favouring the presidential system over the parliamentary.

However, soon after, his successor Mohamed Nasheed lambasted Gayoom’s statement, accusing the former president of committing election fraud in every poll during his tenure including the 2007 referendum vote.

He stated that the only election which Gayoom had failed to turn in his favour was the 2008 presidential polls, the first democratic elections held in the Maldives in which Nasheed ended Gayoom’s 30-year reign as president.

In contrast to Gayoom, Nasheed has firmly continued to advocate for a parliamentary system in the Maldives, a stance supported by several senior members of his political party, Maldivian Democratic Party (MDP), which is presently the main member of the ruling coalition.

Retorting to the allegations, Gayoom dubbed Nasheed’s claims as irrational, rhetorically questioning why 30 years of supposedly fraudulent polls ended with the 2008 Presidential Election.

In response to Nasheed, the former prosecutor general, Ahmed Muizzu, who was a member of the parliamentary committee that oversaw the 2007 referendum poll, also defended the vote, stating there was no foul play. He noted that the referendum vote and the presidential polls the following year marked the first time that ballot boxes were counted at their respective stations under the eyes of election monitors, as opposed to previous elections when the boxes were transferred to capital Male’ for counting.

Muizzu maintained that the referendum vote was the most transparent election held in the country at that time.

Although Gayoom’s political party Maldives Reform Movement (MRM) is presently a member of the ruling coalition, Gayoom and Nasheed have been long known as political rivals, since Nasheed rose as a highly vocal critic during Gayoom’s administration, slamming his government as authoritarian.

Following Nasheed’s victory in the 2008 democratic polls, Gayoom has remained active in the political arena, critical of the MDP administration until Nasheed’s abrupt fall from power in February 2012 in the wake of an alleged coup.

While Gayoom and Nasheed remain bitterly divided on the topic of governing systems, some political entities have raised allegations that Nasheed is planning to push for a parliamentary system amid the ongoing term of incumbent President Ibrahim Mohamed Solih.

Although Nasheed has spoken again in favour of the parliamentary system, he stated that he would not initiate such a move without the full support of MDP. He added that the nation’s governing system rested in the hands of its citizens.

Meanwhile, addressing these concerns, President Solih declared last June that his focus was on fulfilling his pledges to the people during the five years of his ongoing first term and that he did not have time to consider a change of system as of yet.

“If at all there is to be a change in the governing system, that decision lies with the Maldivian people”.