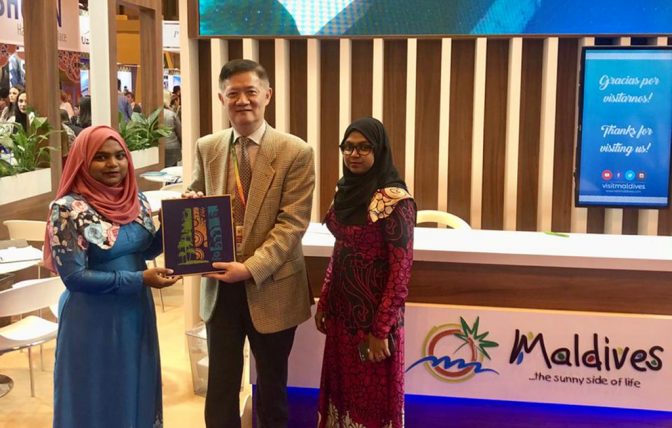 World Tourism Organization (UNWTO)’s Former Regional Director for Asia and the Pacific, Xu Jing has said that Maldives will be among the first batch to welcome tourists post COVID-19.

In a tweet, Xu Jing said that countries like the Maldives can start tourism earlier in his opinion, as the resorts are scattered and not overcrowded.

He further added that point to point flights through charters may be an added advantage from the island nation’s major source markets such as China, but definitely with QR coded health identity.

countries like Maldives will be among first batch welcome back tourists in my opinion, as the resorts are scattered and not overcrowded. Point to point flights through charters may be an added advantage from its major source markets such as China with QR coded health identity https://t.co/ZAVbgXFfGf

Xu Jing explained QR coded health identity stating that its a mobile tracing system used via cell phone. This system will give details of where the traveller has been in the recent past with green being safe, yellow and red being problematic. Now in China, it is applied to the booking of tickets, going to attraction places etc. and is working to quite some extent.

Xu Jing began his career in tourism at the China National Tourism Administration where he was in charge of international relations. He joined the World Tourism Organization (UNWTO) in 1992 as Officer to the Regional Representation for Asia and the Pacific. He recently retired as Regional Director for Asia and the Pacific of UNWTO, a position he assumed from the end of 2003. In addition to his regional responsibilities, he was also the UNWTO’s Executive Secretary of the General Assembly and the Executive Council.

Xu Jing was instrumental in setting up a regional tourism research platform for UNWTO, i.e. the UNWTO/PATA Forum on Tourism Trends and Outlook which is an annual research event held in Guilin since 2007. Xu Jing coordinated and supervised a wide range of UNWTO technical studies and publications at the Asia-Pacific level.