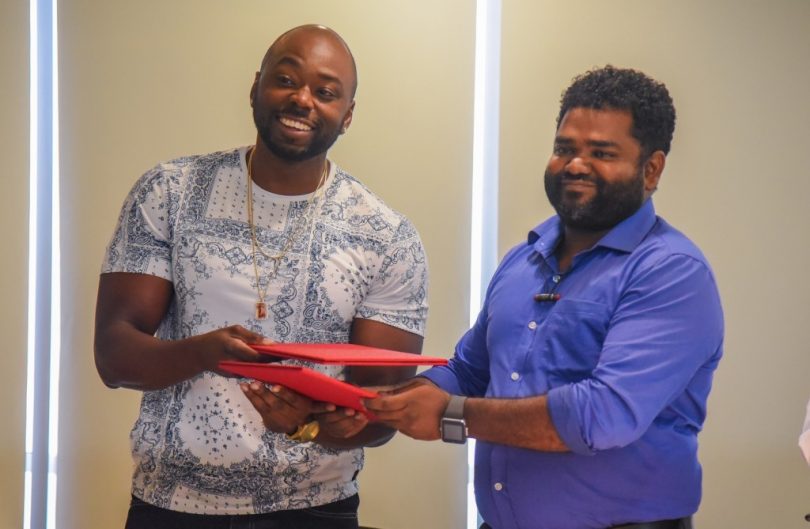 Agreement signed between Maldives Island Reality and an undisclosed US corporation to establish a world-class records studio. | Photo: Zaha Ahmed/Avas

The Maldives has signed an interesting agreement with a US-based music corporation to establish an international standard records studio.

The signing ceremony was held at Salt Restaurant on Wednesday between an undisclosed US company and Maldives Island Reality. The local company involved has kept the identity of their foreign aide discreet.

Though the details of the US-based corporation was undisclosed Maldives Island Reality has confirmed they will be revealing their partners in a not so distant future.

Some rumours suggest the US-based music corporation be Atlantic Records since a prominent member of the group had recently arrived in the Maldives seeking local talents.

Maldives Island Reality has aimed to introduce revolutionary changes to the tourism industry with a mega-project; the details of it kept very tight-lipped so far while they have plans to establish a restaurant with a rotatory wine cellar.

The next known project from the local company is their revelation of establishing a world-class records studio.

Managing Director of Maldives Island Reality, Mohamed Shaafee stated the deal inked between the company and the US corporation will catalyze the destination promotion of Maldives. He also stated the establishment of a world-class records studio in the Maldives will facilitate and invite world-renowned artists and international celebrities to visit the Maldives and perform their music in the country.

The agreement is notably a newer venture in this region and Shaafee hopes to utilize an international standard records studio by branching its aid and assistance to neighbouring countries.

Shaafee confirms the project cost more than USD million dollar and the preliminary works of the project will kick-off within the next six months. He also added that the company has not settled for a specific island to build the studio but are seeking a resort island for it.