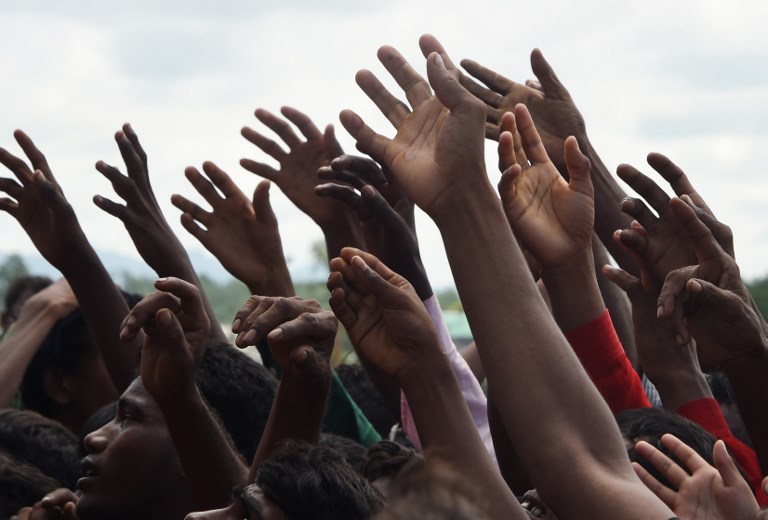 Rohingya refugees reach up for relief supplies at the Kutupalong refugee camp on September 24, 2017.
Nearly 430,000 refugees have been herded by the Bangladesh military into a handful of overstretched camps near the border with Myanmar, where tens of thousands live in the open without shelter.
/ AFP PHOTO / DOMINIQUE FAGET

The Maldives has raised over MVR 11 million in aid to relieve the plight of the Rohingya so far, via the government spearheaded media telethon that took place earlier this week, announced the telethon committee on Monday.

Committee member and secretary general of the religious advisory body Fatwa Majlis, Mohamed Riza, stated that the Rohingya fund will be left open until September 30 in order to collect the aid from islands, and conduct more related activities.

“We will announce the total amount on the thirtieth,” he said. 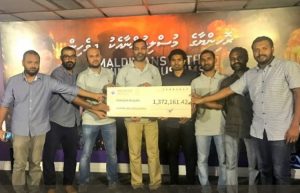 Staff of MPL pose with a cheque of MVR 1.3 million donated to the Maldivians With Rohingya fund. PHOTO/MPL

Riza added that the government is currently deliberating on how to deliver the funds to the Rohingya Muslims of Myanmar. Noting that the usual procedure is to send the aid directly to a nation’s government or via an international aid group, Riza said that special caution must be taken in this case. He stated that details will be unveiled on September 30 as well.

Meanwhile, the committee in charge of the fundraising movement has also announced a special festival for the coming Friday to raise more funds, which includes football matches and jersey sales.

Local television channel Raajje TV had also carried out a telethon earlier for the Rohingya, raising over MVR 5 million. The aid has since been handed over to the Maldivian Red Cresecent.

The last all-media telethon held in the Maldives was three years ago to raise funds to aid the Palestinians in Gaza. The three-day telethon had raised over MVR 20 million for Palestine.