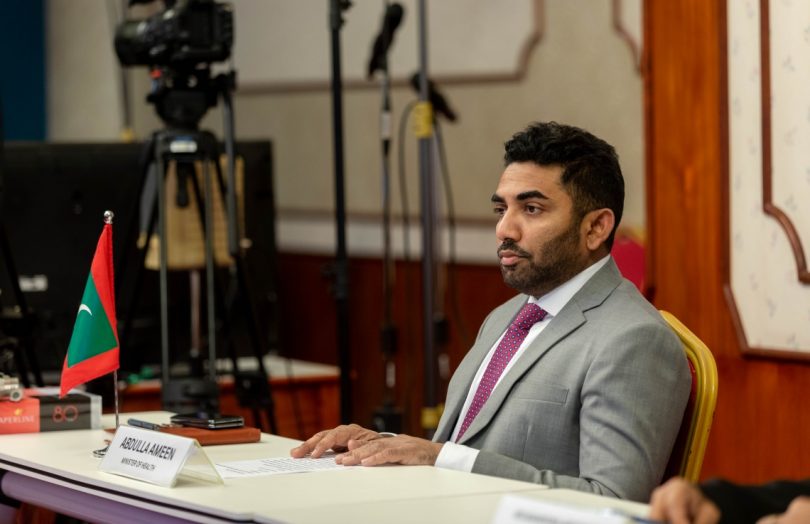 Minister of Health Abdulla Ameen, on Thursday, virtually participated in the Commonwealth Health Ministers Meeting 2020, marking the first instance the Maldives joined a meeting following its reintegration into the organization.

Speaking at the meeting, Health Minister emphasized the importance of cooperation among Commonwealth member states to effectively tackle the ongoing COVID-19 pandemic.

The meeting was held based on the theme ‘delivering a coordinated Commonwealth COVID-19 response’.

Secretary-General of the Commonwealth Patricia Scotland stressed the necessity of international cooperation amid the ongoing pandemic, during her address at the meeting.

She also expressed gratitude toward all frontline workers and observed a minute of silence in honour of those who died while serving on the frontline.

World Health Organization (WHO) Director-General Tedros Adhanom Ghebreyesus urged countries to increase the prioritization of primary healthcare and ensure that COVID-19 measures were designed in a manner that sustained public health achievements.

Furthermore, he reiterated Secretary-General Scotland’s call for international cooperation and added that the current circumstances also necessitated unity within nations as well.

The meeting concluded with the proposal of an agreement stipulating the exchange of information between Commonwealth members and increased efforts to protect vulnerable groups, including senior citizens and chronically ill individuals, from impacts of the pandemic. The agreement also called for countries to opt for multi-sectoral virus responses as per WHO guidelines and urged for the facilitation of necessary medical supplies.

A total of 57 health ministers from 27 countries participated in the first-ever virtual Commonwealth Health Ministers Meeting. Generally held in Geneva, Switzerland on an annual basis ahead of the World Health Assembly, the meeting was held online due to constraints presented by the COVID-19 pandemic.

The Maldives last participated in the Commonwealth Health Ministers Meeting in 2016.