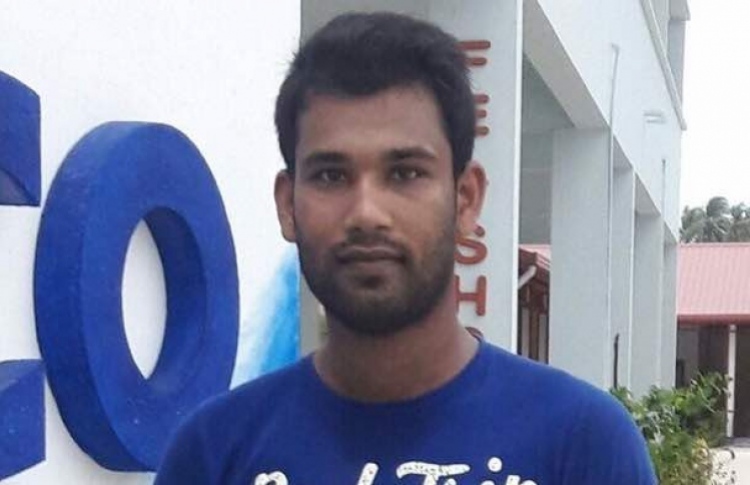 Sumon Miah, the Bangladeshi national who confessed to killing Ismail Umar, a mechanic at the Ihavandhoo ice plant.

Sumon Miah, who is charged with the murder of a local man in Haa Alif atoll Ihavandhoo island last Ramadan, pleaded guilty on Monday and gave a graphic description of the crime in court.

The victim, Ismail Umar, 54, of Lhaviyani atoll Hinnavaru island had been a mechanic and the in-charge of the ice plant at Ihavandhoo. He was found with multiple stab wounds inside the plant on June 16.

Police had arrested Sumon Miah, a Bangladeshi national who had worked at the ice plant, as the prime suspect shortly afterwards. He had given his initial confession during the interrogation.

The police had earlier revealed that the murder was an act of vengeance. Miah, who was presented to the Criminal Court for his first hearing on Monday, handcuffed and in prison uniform, confirmed that it had been revenge.

With the help of a translator, Miah narrated that Ismail Umar had turned antagonistic towards him after Miah told the mechanic that he wanted to quit working in Ihavandhoo in favour of the ice plant operated in Lhaviyani atoll Felivaru island. Claiming that Ismail Umar had criticized all of Miah’s work, constantly picked arguments with him and even withheld his overtime allowances, Miah declared that the final straw was when Ismail Umar’s aggression had ultimately put Miah’s marriage on the rocks.

According to Miah, Ismail Umar had endlessly told him off for calling his wife, who resides in Bangladesh, during work hours. After Miah finally requested his wife to stop the frequent calls, she had left their house in anger and refused to pick up his phone calls. That, Miah said, was the point when he had decided to kill Ismail Umar.

Sumon Miah had gone into hiding at a place close to the ice plant a few days before the planned murder. He revealed that he had acquired a cord of rope 12 feet in length with the intention of strangling Ismail Umar in his sleep. He had also obtained an unused fishing knife, over a foot in length, from the ice plant as a back-up in case Ismail Umar woke up.

Miah recounted that he had broken through the bathroom window into Ismail Umar’s room in the ice plant’s accommodation block at dawn and tried to strangle him.

“But as the rope was also too long, [Ismail] woke up before I could tighten it [around his neck] and started to beat me with his hands,” he narrated through the translator.

Miah said that then he had picked up the knife he left on top of Ismail’s bed and stabbed Ismail in his left hand and shoulder. He narrated that Ismail had grabbed the knife before the third strike, but Miah had wrestled it back, cutting himself on the blade. He explained that that was when he had turned his attacks to Ismail’s neck, knifing him three times there. Miah went on to confess that he had pushed Ismail Umar off the bed, and punched and kicked him as well. He added that Ismail was mumbling something Miah could not make out during his final moments.

Attempt to flee the country

Sumon Miah, the Bangladeshi national who confessed to killing Ismail Umar, a mechanic at the Ihavandhoo ice plant.

Miah said that afterwards, he had locked every entrance to Ismail Umar’s room before escaping through the bathroom window again, leaving behind his murder weapons. He sought the help of an expatriate friend to arrange for a speedboat to escape from Ihavandhoo. However, he had withheld his crime from his friend, who was only told that Miah had gotten into a violent fight with Ismail Umar.

He further narrated that he had returned to the ice plant to hide Ismail Umar’s body later that morning. He had tried to enlist the help of another expatriate friend en route but the latter had refused.

According to Miah, Ismail Umar showed no signs of movement when he returned. He had dragged Ismail Umar’s body to hide in a brine tank in the ice plant but did not succeed as he was by himself. In the end, he had left the body in a narrow space nearby and thrown the fishing knife into the tank. He added that he had also tried to clean up the bloodied trail left by Ismail Umar’s body.

Taking Ismail Umar’s wallet and mobile phone, Miah had escaped Ihavandhoo via speedboat to Kulhudhuffushi island in Haa Dhaal atoll. He had planned to leave Kulhudhuffushi with the help of some expatriate workers, to capital Male and ultimately flee to Bangladesh. He was arrested by the police at Kulhudhuffushi while he was on the way to retrieve his mobile phone from where it was charging at a café.

His lawyer stated that there were no other statements or evidence to be submitted by the defence.

Despite Sumon Miah pleading guilty to the murder, the prosecution requested to bring forward witness testimonies as, being a murder trial, the case will be forwarded to the higher courts.

Judge Ali Adam acquiesced and ordered the prosecution to submit the documents within seven days. He announced that the hearing for witness testimonies will be held coming January.