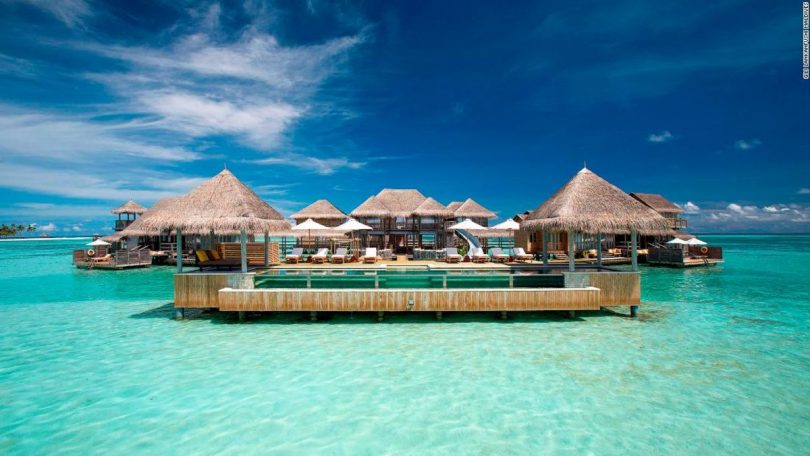 (CNN) — Does being “stranded” over a lagoon for several days sound appealing?

If not, one destination in the Maldives might change your mind.

That’s The Private Reserve, the world’s largest overwater villa, which has more than three football fields’ worth of distance from its nearest neighbors.

The Private Reserve has the traditional thatched-roof villa look one expects to see in the Maldives, but this one comes with four bedrooms, a cinema room, a butler’s wing and a made-for-Instagram water slide that winds directly into the lagoon, for starters.

Not surprisingly, the ultraluxury villa is one of the premier tropical getaways for the super-rich and famous, who seek maximum privacy with an awful lot of space — all 18,000 square feet of it. 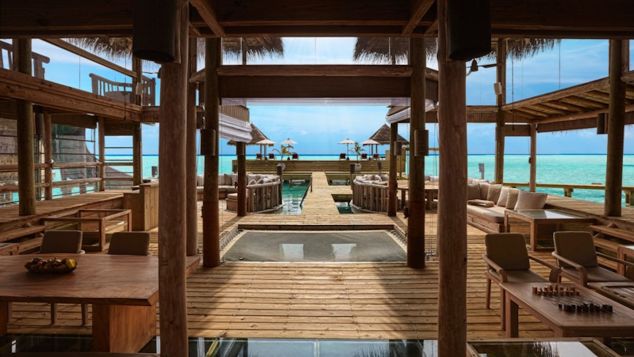 The Private Reserve experience starts with a Mr. or Ms. Friday — Gili’s version of “butler” — chauffeuring privileged guests on a private boat from the main resort to the secluded estate, a journey made all the more scenic with dazzling, shallow shades of aquamarine.

The two-story estate looks so enormous upon approaching that it could double as a standalone resort.

After arriving on the private jetty and receiving a thorough run-down on the massive space, the boat keys are given to the guests for the duration of their stay, giving them freedom to roam the lagoon-sheltered resort space or, as most tend to do, sequester themselves from the rest of the world on the Private Reserve.

The only moving, breathing things guests will have to encounter are the plentiful tropical fish, squid, friendly manta rays and sea turtles lapping around the villa’s lagoon.

Bahauddeen, Gili Lankanfushi’s director of rooms, has seen the 13-year-old Private Reserve evolve from a “humble” mega-villa (under former Soneva Gili ownership) into the four-bedroom behemoth it is today.

“When they started building [the Private Reserve] in 2004, it first only had two bedrooms, kitchen, spa and a butler’s room,” Bahauddeen says.

The resort would soon learn that two bedrooms wouldn’t be enough for certain guests.

“We started getting requests from royal families — they wanted to take 2-3 rooms together — as well as from other high-profile clients, who wanted to accommodate eight or nine people.”

Luxury with a conscience 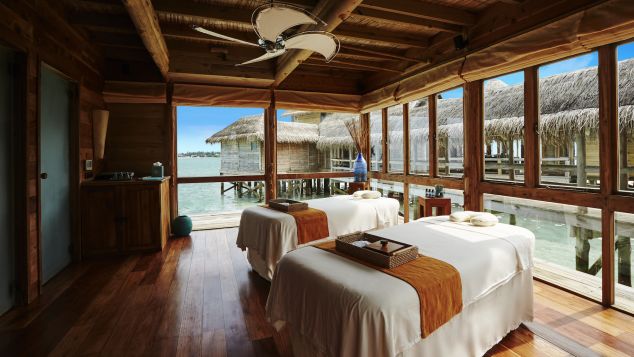 After a series of renovations and upgrades (the last major one occurring in 2015), The Private Reserve now has two en-suite bedrooms and a two-bedroom duplex master suite. There’s an option to convert the library/study room into an additional bedroom should guests need even more space.

Add in lengthy wooden walkways for each wing, multiple outdoor decks and pavilions, a spa (including sauna and steam room) a full kitchen, a mini-gym, a cinema room, an open-plan living area, a lagoon “pool” area, butler’s quarters, rooftop terrace with daybed, hotel room-sized bathrooms and a 680 sq. ft. freshwater infinity pool, and it’s safe to say that today’s Private Reserve has satisfied those customer demands.

The only known challenger to the “world’s largest overwater villa” title is the three-bedroom John Jacob Astor — from the St. Regis Maldives’ Vommuli — which is sized at 16,500 square feet.

Though there have been many changes and sparkly additions to the Private Reserve, its essence remains true to the original owner’s vision.

The thatched roofs in The Private Reserve, as in all the other villas in Gili Lankanfushi, are made from kajan, a special palm leaf that older Maldivian generations used to build their home roofs.

Furniture is sourced from reclaimed Indian teak woods and Australian cedar and casarina.

Who exactly stays in this enormous overwater palace?

“We get families, mostly,” says Bahauddeen.

“We also get groups of friends coming to celebrate a birthday or somebody’s anniversary. And, actually, it is common that we only have a couple staying there, and then two butlers will be serving them 24 hours.”

According to Bahauddeen, the majority of The Private Reserve patrons tend to hail from the United States, United Kingdom, Germany, France, China and Hong Kong. 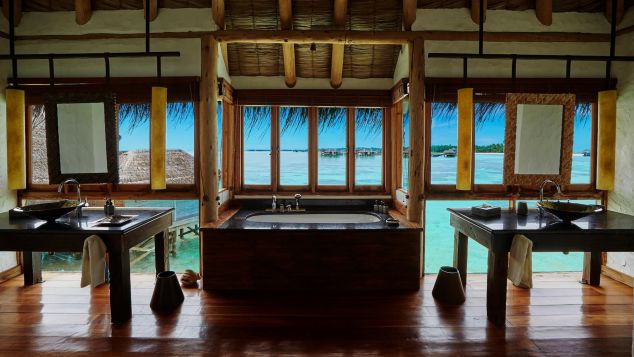 The villa is made from sustainably-sourced plantation teak, palm wood and bamboo. Gili Lankanfushi Maldives

But is this overwater villa, which starts at around $14,700 per night, over-the-top?

Most would say, “no,” as not only was the Private Reserve an in-demand solution to accommodating larger parties, it was built under the resort-wide ethos of minimal, “barefoot luxury.”

“The whole concept of Gili Lankanfushi is more Robinson Crusoe style… we are very low-profile,” Bahauddeen explains. “Though we try to cater to all of the luxuries, we want to cater in harmony of nature and in harmony of our Maldivian culture. That’s why we don’t have remote-controled window curtains or big plasma TV’s everywhere.”

As “ultimate” in scale as it might be, the Private Reserve is still at its heart a rustic yet modern Maldivian space where serenity is the priority, not gimmickry.