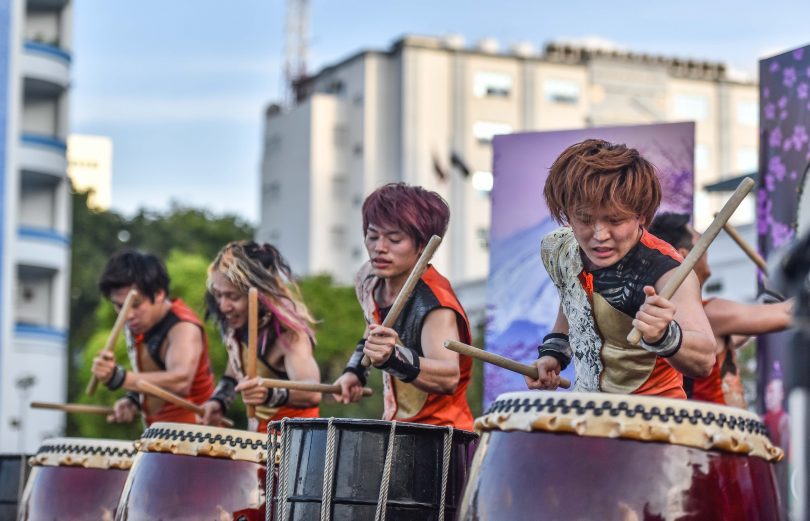 Members of SAI, a Japanese traditional drum group, pictured during their concert at the Republic Square, Male, on October 16, 2017. PHOTO: HUSSAIN WAHEED/MIHAARU

The first beats of the drums, which resonate loud and thundering across the Republic Square, are enough to draw the eye of everyone in the vicinity. There is already a crowd gathered in front of the stage, which has a backdrop proudly displaying “50th Anniversary of Japan-Maldives Diplomatic Relations”. But when the five Japanese men dressed in traditional costumes bring down their drumsticks on their “wadaiko”, passersby stop and approach too, drawn to the magnificent show presented by the Japanese drum group “SAI”.

A renowned traditional drum troupe in Japan, SAI were invited to perform in the Maldives by the Japanese Embassy. Their drum concert in the Republic Square on Monday afternoon, followed by another at state television TVM on Tuesday night, were part of a series of events held by Japan and the Maldives this year to celebrate the golden jubilee of diplomatic relations between the two allies.

The two concerts were made all the more colourful by SAI’s collaboration with famous local boduberu group, Habeys, who came together in a blend of true Japan-Maldives harmony.

The events were organised by the Embassy of Japan in association with Public Service Media (PSM).

The wadaiko is a traditional percussion instrument, one of the oldest in Japan, going back over 2,000 years. SAI are the first wadaiko group to perform in the Maldives, and they did so true to the Japanese saying, “dogimo o nuku”, which means “to give spectators or audience an astonishing experience”.

Izumi Hagiwara of SAI pictured during their concert at the Republic Square, Male, on October 16, 2017. PHOTO: HUSSAIN WAHEED/MIHAARU

SAI performed a variety of songs during the concerts, which lasted over an hour each. Their powerful wadaiko pieces were accompanied by other traditional instruments such as the bamboo flute and chappa (small cymbals). With amusing moments of audience interaction and a comedic skit – as well as showing off their Dhivehi skills with some tongue-in-cheek jokes about their name (“sai” means “tea” in the local language) – SAI held their viewers captive, even with only five performers.

“Back in Japan, we have 19 members in total,” revealed Takayuki Kasai, the team leader. Indicating his peers, he remarked with a laugh, “These here are the best five members.”

Kasai stated that SAI had practised beforehand in Japan, since their arrival in the Maldives was on the eve of their first performance.

“We practised from nine in the morning until ten at night,” he said, adding that SAI usually hold practices three times a week then they are not on tour.

Kasai had founded the group in 2005, during his first year at university. SAI were crowned champions at the “Wadaiko Contest East Japan” in 2012, after which SAI kicked off their professional career in 2013.

“Ultimately, the past twelve years of practice were all for the Maldives,” the group joked.

One of the highlights of SAI’s dual concerts was their collaboration with Habeys Boduberu group. It brought two distinctive, but complementing styles of traditional drum music together in an exhilarating finale.

SAI and Habeys pose for a picture after their collaboration at the Republic Square, Male, on October 16, 2017. PHOTO: HUSSAIN WAHEED/MIHAARU

While SAI did not have much time to practise with Habeys – getting together for merely an hour before their first concert at the Republic Square – the group said they had watched some videos of Habeys’ boduberu performances earlier to get a feel of their music.

“The fast rhythm of boduberu music is similar to the tempo of Japanese wadaiko. So it was easy to follow,” said Kasai.

Habeys had also introduced SAI to the boduberu style of dancing – with a modern twist – onstage; something that the latter had taken up with enthusiasm.

“When we go overseas, the chance to collaborate with the local groups of other countries are moments we really enjoy.”

The Maldives – image, impression … and food!

This also marked the very first visit to the Maldives for the five members of SAI.

“The Maldives is pretty famous even in Japan,” declared Kasai, revealing that it is ranked as the top honeymoon destination by his countrymen. “All the members really looked forward to coming here.”

Though SAI’s busy three-day schedule was confined to Male, the members said they liked the tropical climate and praised the beauty of the ocean. SAI also expressed hopes to return and see other islands and resorts someday.

However, what SAI truly did get to experience was Maldivian cuisine – and it was an instant hit. What started out as curiosity over short-eats like bajiya and meals with rihaakuru, had ended up as a gourmet meal. While preferences varied among the members, contenders for the “most delicious” food included garudhiya, theluli faiyy, rihaakuru dhiya, and mashuni.

“To revive the wadaiko”

SAI thanked the Embassy of Japan for the chance to perform and celebrate the 50th anniversary of Japan-Maldives Diplomatic Relations.

Takahiro Watanabe of SAI pictured with “chappa” during their concert at the Republic Square, Male, on October 16, 2017. PHOTO: HUSSAIN WAHEED/MIHAARU

As a veteran group that hold over 200 performances across Japan in a year, SAI have also held concerts in other nations, including Iran, Hawaii and Latin American countries. When asked about future plans, SAI announced that they are to perform in Azerbaijan and Russia later.

SAI have also appeared in several Japanese television programmes, endorsed brands like McDonald’s and Google, and they hold educational workshops.

Regarding their vision, SAI declared that they wish to revive the wadaiko in Japanese society.

“Wadaiko is considered a bit outdated,” said Kasai. “We want to revive the wadaiko and make it of social significance, and then pass it on to the next generation.”

SAI’s wadaiko concerts were the latest event jointly held by Japan and the Maldives to commerate 50 years of diplomacy. The Embassy of Japan in the Maldives revealed that Japan Post will also issue special commemorative stamps on November 14 to further commemorate this milestone.