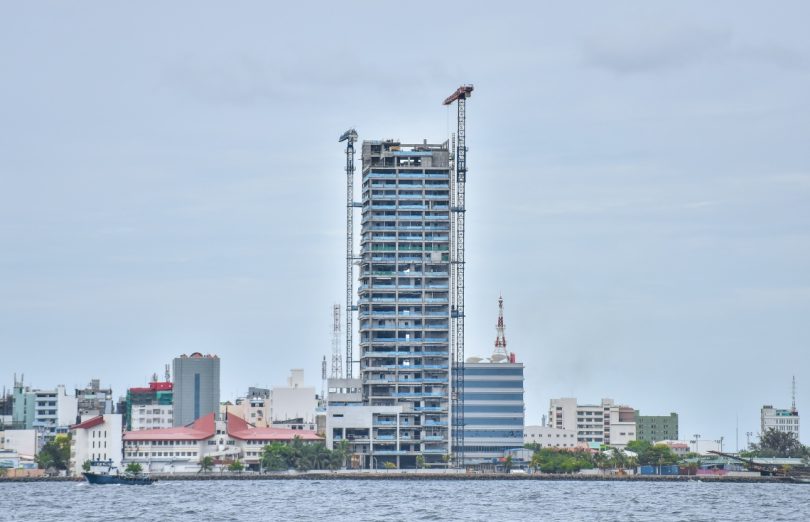 The original Dhivehi article was published on Vfp.mv website on 23rd November 2017.

Indira Gandhi Memorial Hospital (IGMH)’s 25-storey building is the first building to stand that tall in the Maldives. However, the way the construction of the building was awarded and the project cost raises suspicion and foul play all over it.

For the private hospital that is being built to meet international standards the costs was USD 90 million, and this is inclusive of an accommodation block. It is an 8-storey 2 big towers. All equipped with the state-of-the-art technology required for a modern hospital.

Therefore, when 142 million US dollars was spent on IGMH’s new building, it wasn’t just the politicians who became outraged over it. Field experts also said that it can be finished at MVR 600 million or USD 38 million. However, the project is undertaken with a price tag of MVR 2.1 billion just for the building alone. The facilities cost for the hospital still remains.

Some of the parliamentarians also says that according to the information gathered by the committees in relation to the cases filed against the IGMH building project, it is believed that the project was awarded to the party which proposed a price that is twice the amount in respect to the lowest figure proposed for the project.

While there are so many questions raised about the first 25-storey project, a Chinese company has been awarded to construct several 25-storey towers to be built on Hulhumalé island, This USD 434 million project has been assigned to the company to build 16 towers of 25-stories. If that is the case the cost of each tower equals to just the design work and drawings of IGMH.

For the 16 towers to be built in Hulhumalé, the cost per tower comes to USD 27.1 million. This is a huge difference when compared to the new IGMH building.

In other words, with the cost of constructing the new building of IGMH, 25-storey 6 towers can be built on Hulhumalé island. Measuring it in floors, it is 150 floors.