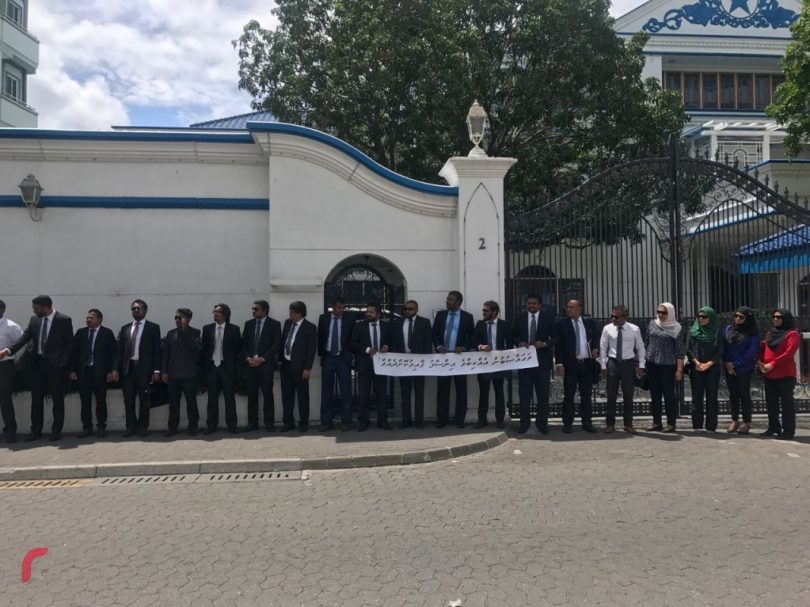 The International Commission of Jurists, or ICJ, has called on the Maldives to revoke the suspension of 54 lawyers, adding that the mass suspension “is incompatible with international law and standards“.

An open letter, signed by the Commission’s secretary-general Sam Zarifi, condemned the suspension, emphasizing that it must be revoked unconditionally.

Noting that the 54 lawyers, out of the 56 who signed a petition calling for the judiciary’s reform (the other two were already under suspension) had been suspended, ICJ said that UN Basic Principles of the Role of Lawyers state that lawyers “are entitled to freedom of expression, which includes, among others, the right to take part in public discussion of matters concerning the law, the administration of justice and the promotion and protection of human rights“.

ICJ noted that the suspension of the lawyers was “in clear violation of these principles,” adding that the lawyers “given no prior notice that they were under any investigation or disciplinary proceedings, and they were not given an opportunity to defend themselves or be heard at all“.

“We are also concerned that the suspension could have a chilling effect on others in the legal profession, deterring them from commenting on matters concerning the Supreme Court or the administration of justice for fear of professional repercussions. This concern is particularly acute given the absence of a professional bar associations or other independent organizations in the country to advocate for the collective interests of lawyers,” said ICJ.

ICJ said that lawyers “are one of the pillars upon which human rights and the rule of law rest,” and that they play an important role “in protecting human rights and in guaranteeing that the right to a fair trial is respected by providing accused persons with proper defence in court“.

“It is therefore essential that other institutions of the State, including the judiciary, recognize the independencthe legal profession,” added ICJ.

It further called on the Supreme Court and the Department of Judicial Administration (DJA) to revoke the suspension “and ensure any disciplinary proceedings against lawyers comply with the Maldives’ obligations under international standards“.

“We also urge the Supreme Court to desist from assuming authority to discipline lawyers and support efforts to establish an independent, self-governing regulatory body of lawyers,” said ICJ, as well as “to respect the freedom of expression and association of all persons, including lawyers”.

ICJ’s letter also noted that suspensions of 13 of the lawyers have since been lifted, highlighting that it has received reports that this was done so after they “submitted statements to the DJA apologizing to the Supreme Court for signing the petition and causing offence to the Court“. ICJ also noted that other lawyers have informed them of plans to submit apologies to the DJA, adding that “in the absence of a redress mechanism to challenge their suspensions, they are left with little choice but to apologize“.