Check out the story behind the biggest skatepark build in the Maldives and meet the brilliant multinational crew who shaped the DIY park from the ground up within just a few short weeks.

RSP and the History of Skateboarding in the Maldives

Skateboarding in the Maldives has been around in small circles for over a decade now. With a steadily growing skating community, the demand for a space where skaters can gather and practice has also been growing. The answer came around 2012, when Raalhugandu Skatepark (RSP), a free skatepark in the capital city, was established.
“We used to hang out at Raalhugandu because we were surfing, but during the off-season (when we don’t have any good waves) we would go hang out with the skaters. I didn’t even have shoes back then, but I would just borrow a board and try it out barefoot.” Hambe, one of the first-gen boarders, recalls. 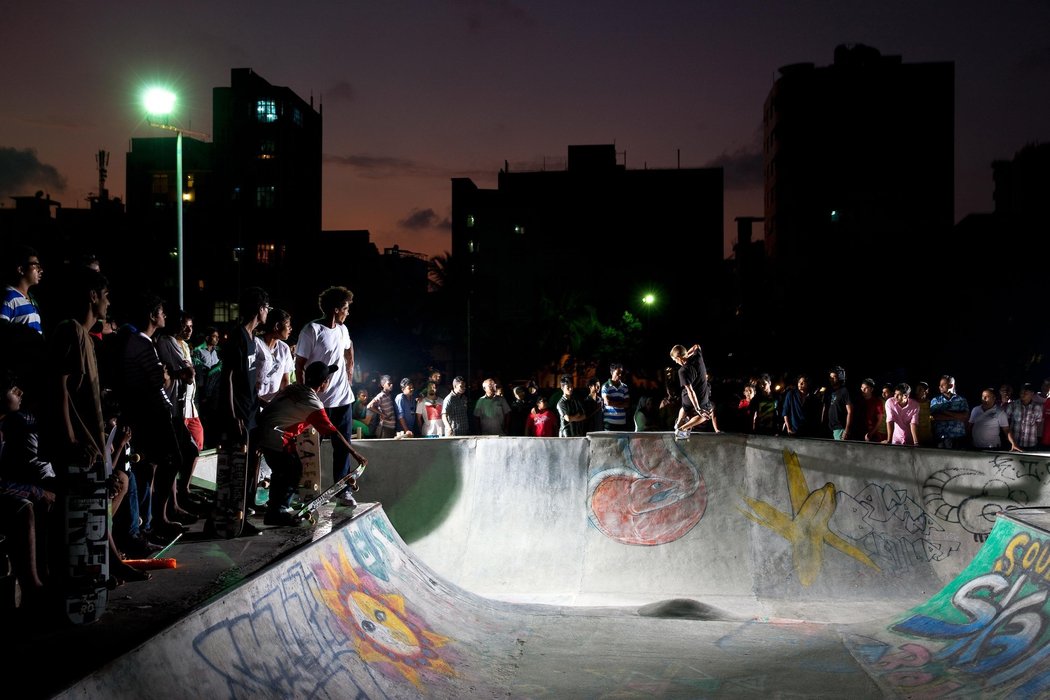 “Before RSP, the first ramps were built DIY by us skaters and we were so inexperienced that we built outdoor wooden ramps. We didn’t realise how easily those ramps would disintegrate in the rain and sun. We finally wrote a letter to the mayor and got the space where RSP would eventually be built and that park was built with little experience in building and limited materials.”
Since then, RSP has been demolished and there was once again no designated solid ground for the skaters to gather.

The Project Begins; a Combined Effort from a Multinational Crew

On 28th March 2018, a team of creative and innovative trailblazers in design and construction were assembled for the Hulhumale’ Skatepark project with the help of Skateparc, Alis, Wonder Concrete and Fifth Pocket. The end result came almost a month later, in the form of a firm foundation for skateboarding in the Maldives.

“I’ve done 3 different projects like this before, and I found out about this build while I was in Morocco and of course I wanted to join the project.” says Sloan, a member of the crew from the United States. “This park is a very unique place; if you look around (this park) you’ll see at least 10 different obstacles which I think makes it a really special place. The people here are super lucky I think, because you can’t find another park like this anywhere else. It’s a guaranteed fact that this place will see use every single day!” 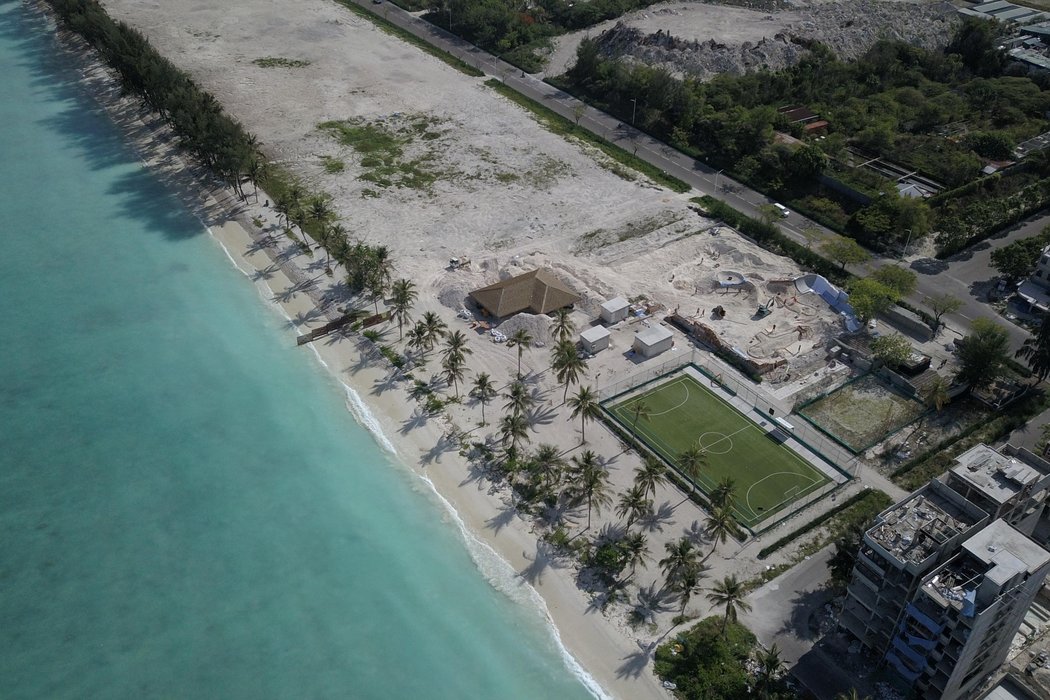 The crew for the construction of this skatepark consisted of a completely voluntary group of 51 brilliant skaters, skatepark builders, construction crew, engineers, architects, designers and entrepreneurs from over 15 different nationalities who worked day and night to make this skatepark dream a reality.
“It’s a good experience with so many people coming together from all over the world, and it’s really great to work with them. I learned a lot of techniques (like with concrete) by being here, and I have taught what I know to others who are here.” said Chubi, from France. 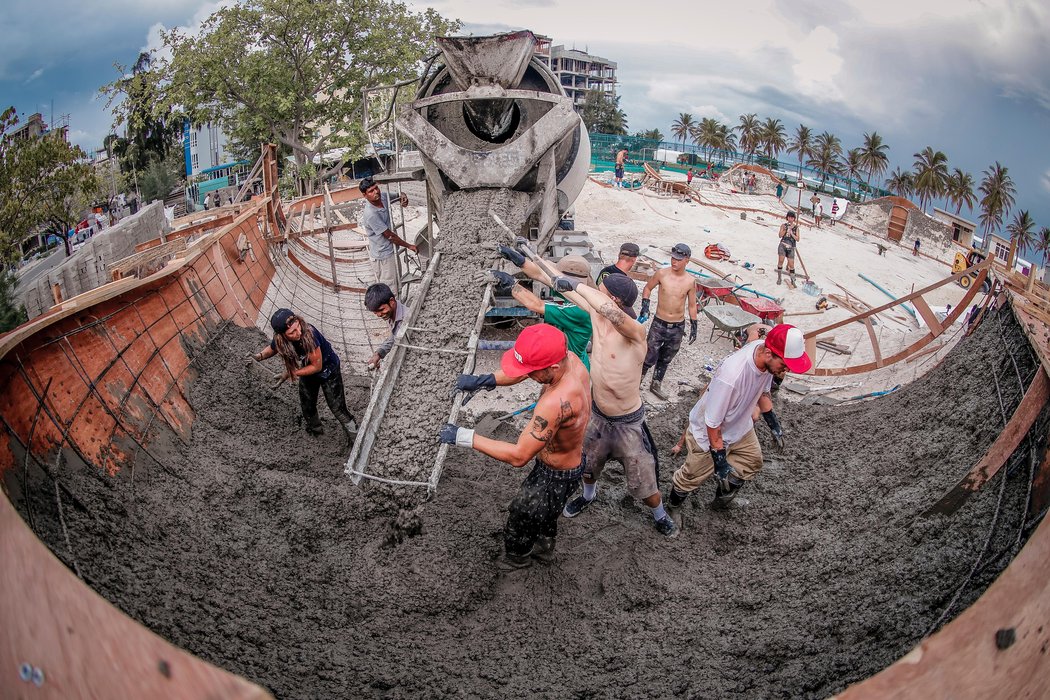 “I’m a pilot working here at TMA, but I’m also a skater and have been part of a few builds in India. I showed up when I saw this on Instagram and started helping out in my free time. I think this is a great initiative, it’s a legitimate park and it’s going to be a good place for kids to come and bond differently.” says Spandan, an Indian resident living and working in the Maldives. “The crew are super hard working. I can barely keep up with them because they are so skilled; it’s pure passion and hard work.” 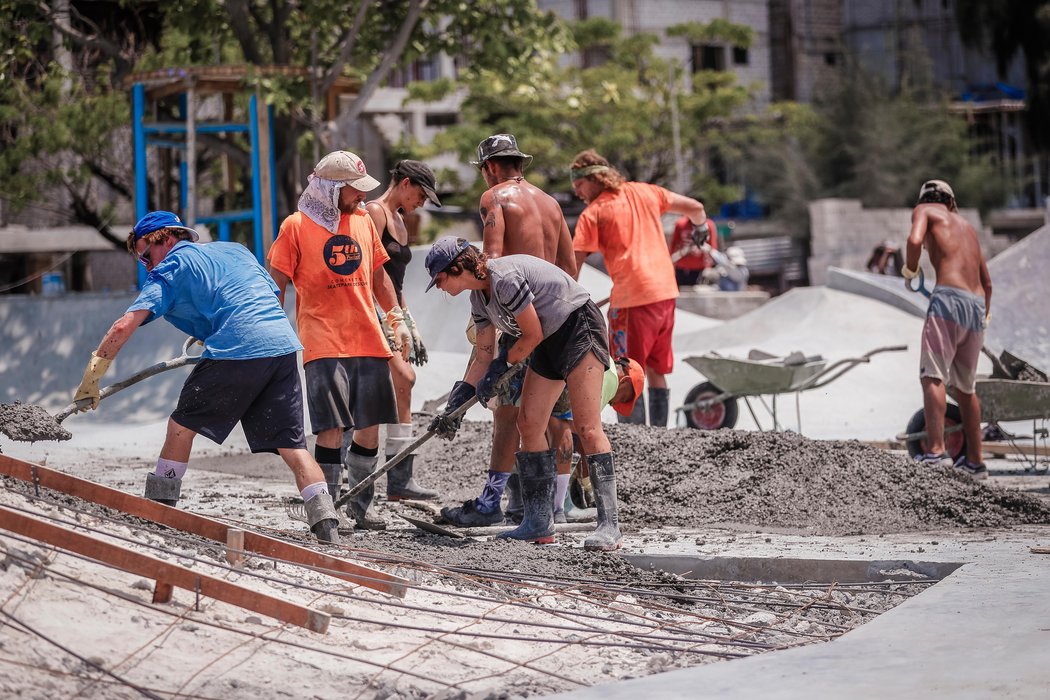 Piling and smoothing concrete for the ramps © MOHAMED AHSAN

The entire park was designed and built as a completely DIY project drawing inspiration from the crew’s own experience and the Maldivian environment rather than drawing up complicated construction plans. The centerpiece of the park, inspired by Maldives is a giant orca. With about 225 thousand kilos of concrete and one month of hard labour, the crew freestyled the construction of the park and ended up creating a masterpiece. 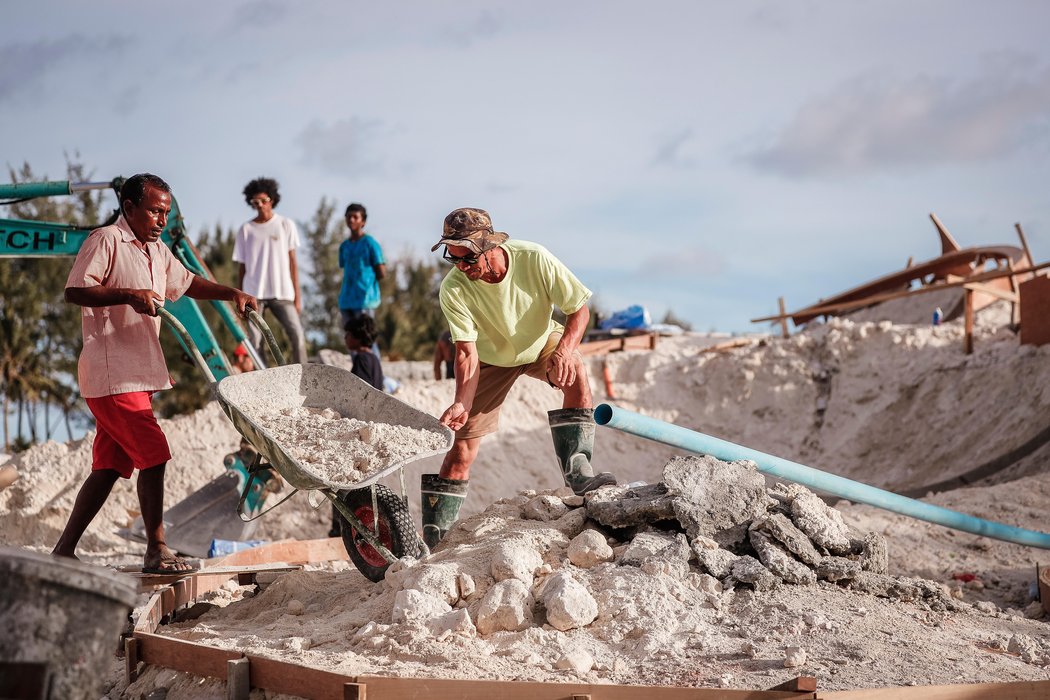 Everyone has a role to play © MOHAMED AHSAN

“Many of the crew here are professional builders and they are used to doing everything exactly by the rules and plans. We have proven before that freestyle building does work and that helped convinced a lot of these talented people to come in and join this project.” Albert Nielson, a Danish builder and skateboarder with over two decades of experience in building skateparks, describes how the crew came about. “Everyone has a hand in deciding what is built. Everyone helps to give more flavour to the sauce.” 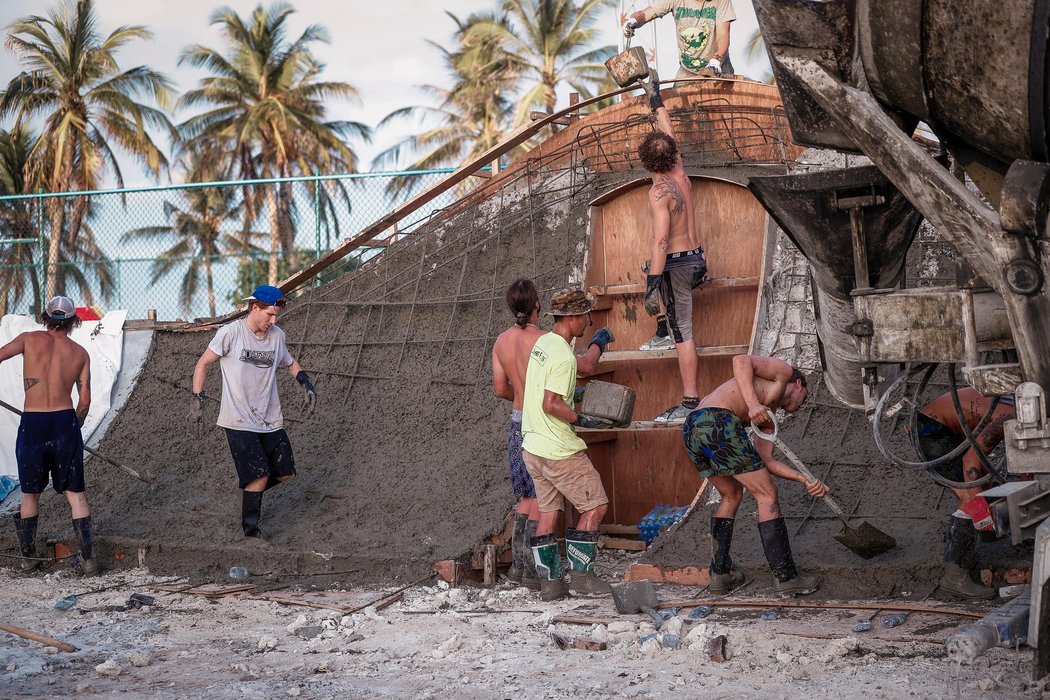 Joshua Fabrin from Wonder Concrete (who helped recruit many of the workers), a Danish builder based in Copenhagen and specialising in Skateparks, calls this his favourite kind of project to work on.
“We came across this project kinda randomly; we’ve been building a few spots in the world in several countries like this through a foundation called Make Life Skate Life. We go to countries where they don’t have opportunities or knowledge in building and we show them how to do it, and we hope that the Governments will see that work and want to continue it. That’s what we hoped for when we came here.” 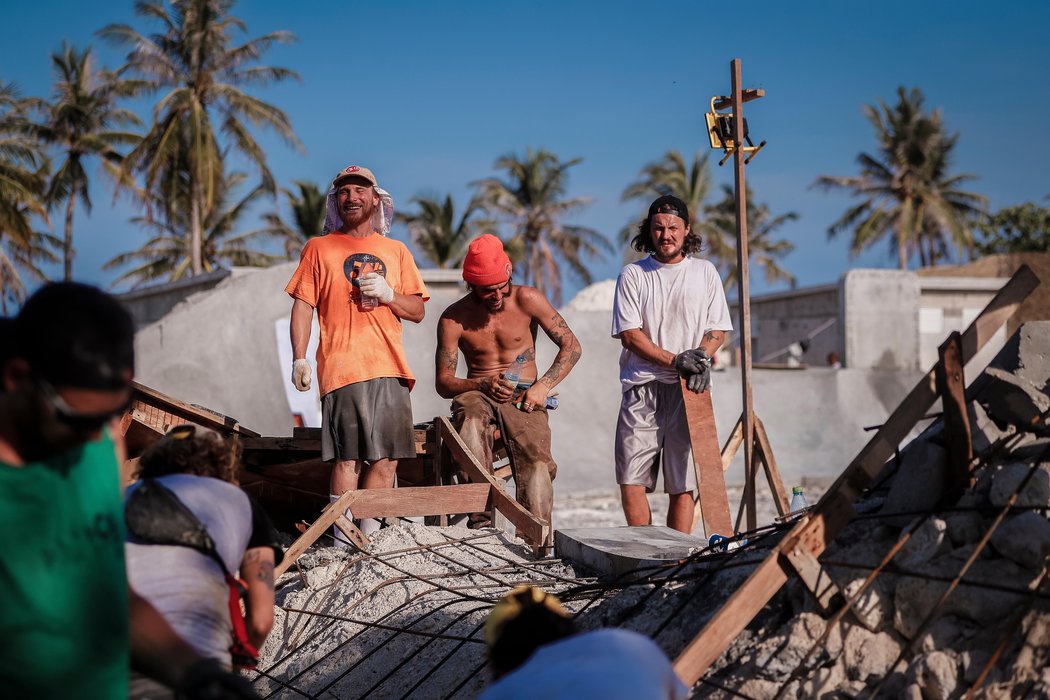 The construction wasn’t without difficulty; the crew worked regardless of rain or shine with countless hours of hard physical labour under the scorching tropical sun, in humidity and heat that none of the crew were used to. Dips in the ocean helped with the heat, but there were other issues too, like the obvious language barrier that is often encountered with such a multinational group and the utter exhaustion of continuous 18-hour days of labour.
“It’s really hard work and it’s hard to get things done sometimes. We have a few very cool Bangladeshi workers here with us who are so awesome to work with, but in the beginning, it was really hard to communicate with them and they were kinda very shy.” says Keshet David from Israel. 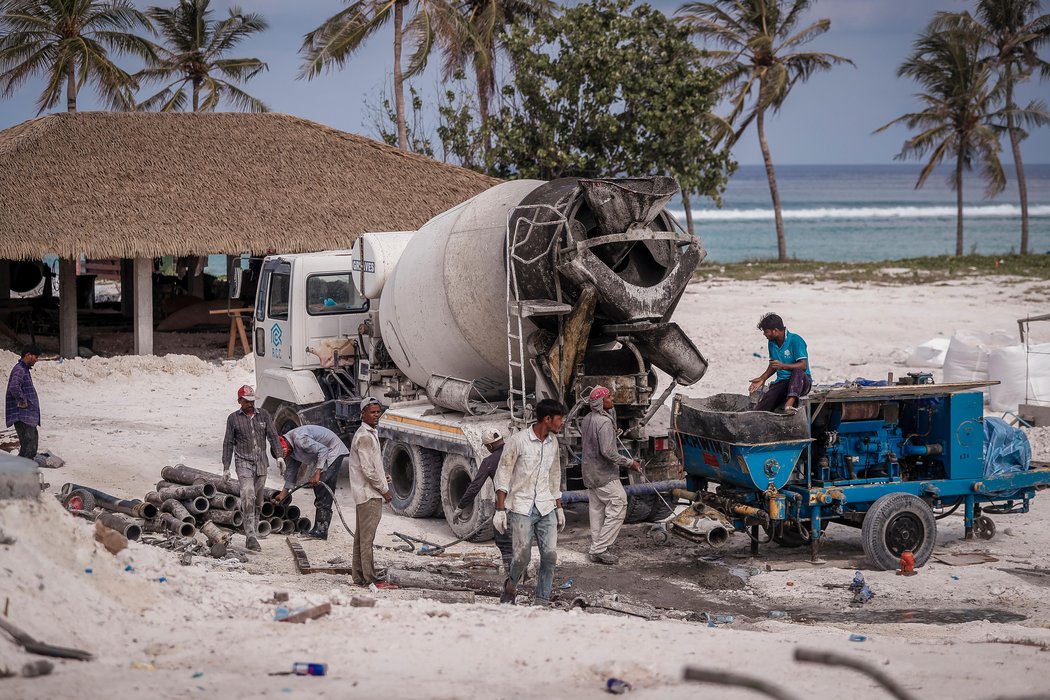 Hard labour from every member of the crew © MOHAMED AHSAN

None of these difficulties stopped or even hindered the progress of the project. Fatigue didn’t have any place for a crew dedicated to reaching that end-goal and that dedication kept them rallied and motivated.
“But then we started having so much fun together.” Keshet laughs as she remembers. “It’s so nice. I just love how our relationship has developed over time, and it has helped make the team much better.” 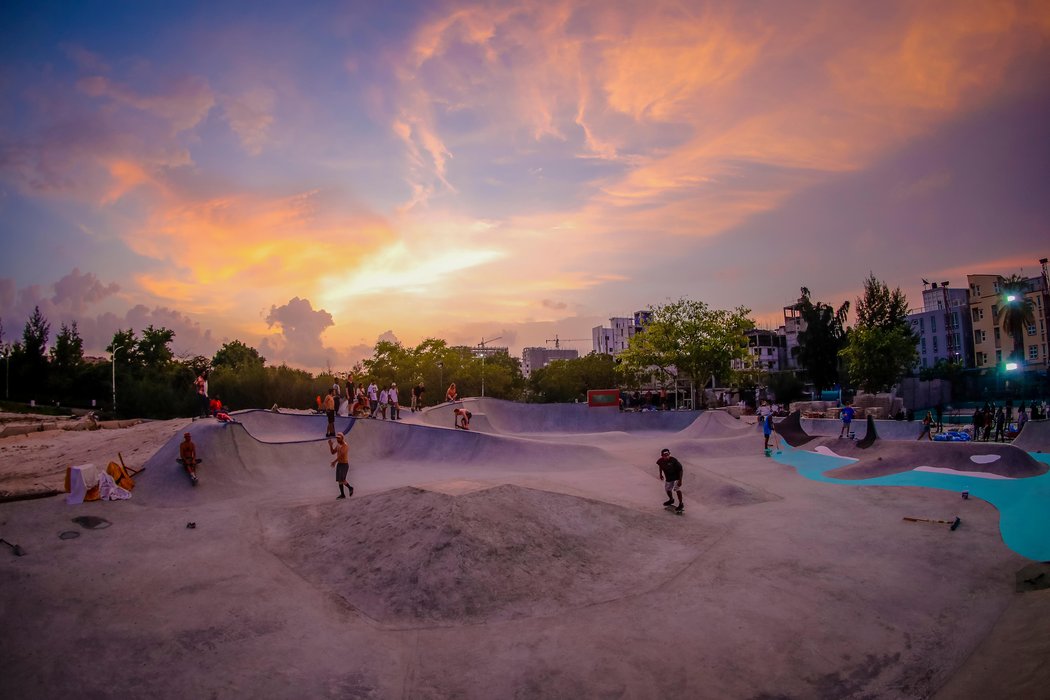 Testing the ramps under the setting sun © MOHAMED AHSAN

“I hope that skateboarding here gives kids something to do that is a lot of fun and with this skatepark they might have a place where they can connect with. I know the options in Maldives are not very big but the kids here hope for more, to come out in the world and see more of it.” says Fabian (Baumi) Baumgarten from Germany, who has been skateboarding since the 90’s and has been involved in dozens of builds across the world including the first free public skatepark in India. “I hope this skatepark will give them that chance; give them a space where they can learn with the freedom to explore themselves and build themselves.”

A Bright Future for Skateboarding

The Hulhumale’ Skatepark opening saw skateboarders from far and wide in the Maldives coming together to enjoy, with many bright-eyed children being introduced to skateboarding for the first time. Jennifer (Jenna) Hirt, founder of Donate for Skate and a member of the crew, donated 21 skateboards to help skateboarding grow even further in the Maldives, and give the opportunity for new talent to rise up. 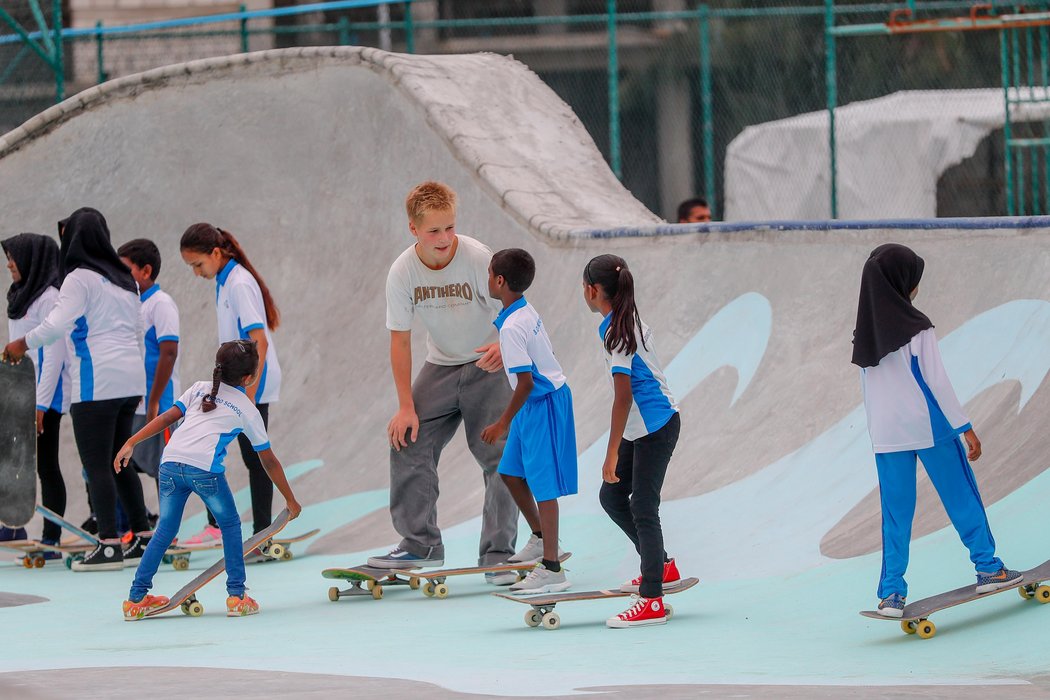 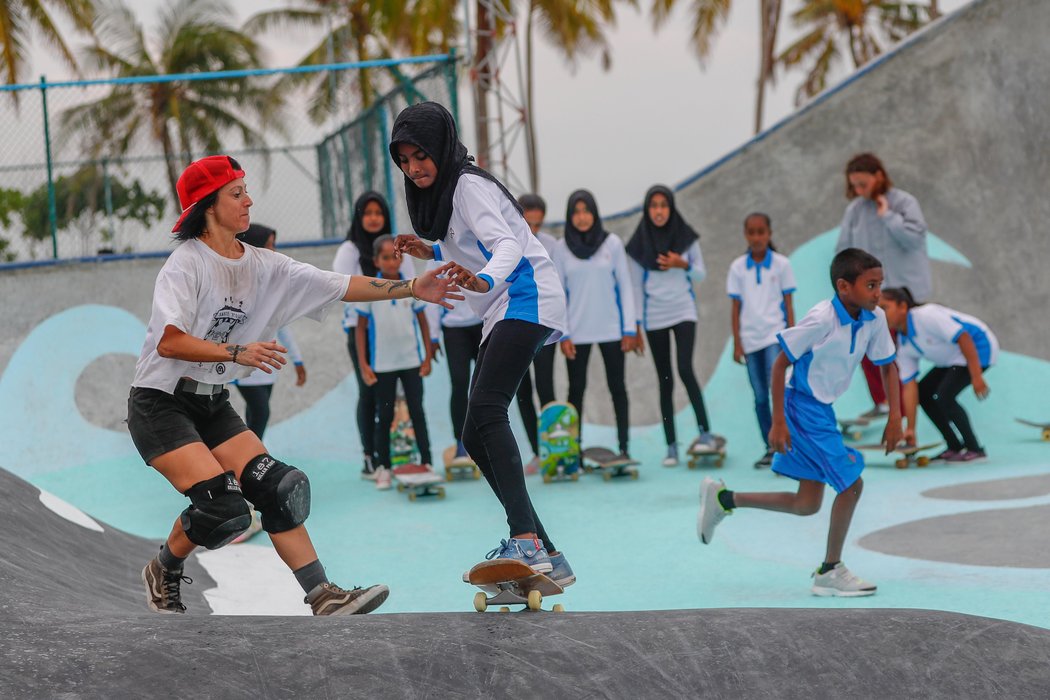 “I started Donate for Skate about a year ago when I noticed there were so many kids who wanted to skate but not enough skateboards. They want to skate, but they don’t have boards, or they don’t have money to buy it, and even when they have money they don’t have access to good boards. I saw kids in Madagascar paying 60 euros for used skateboards that weren’t even in good condition, and I wanted to help them. That’s the gap I am trying to fill.” 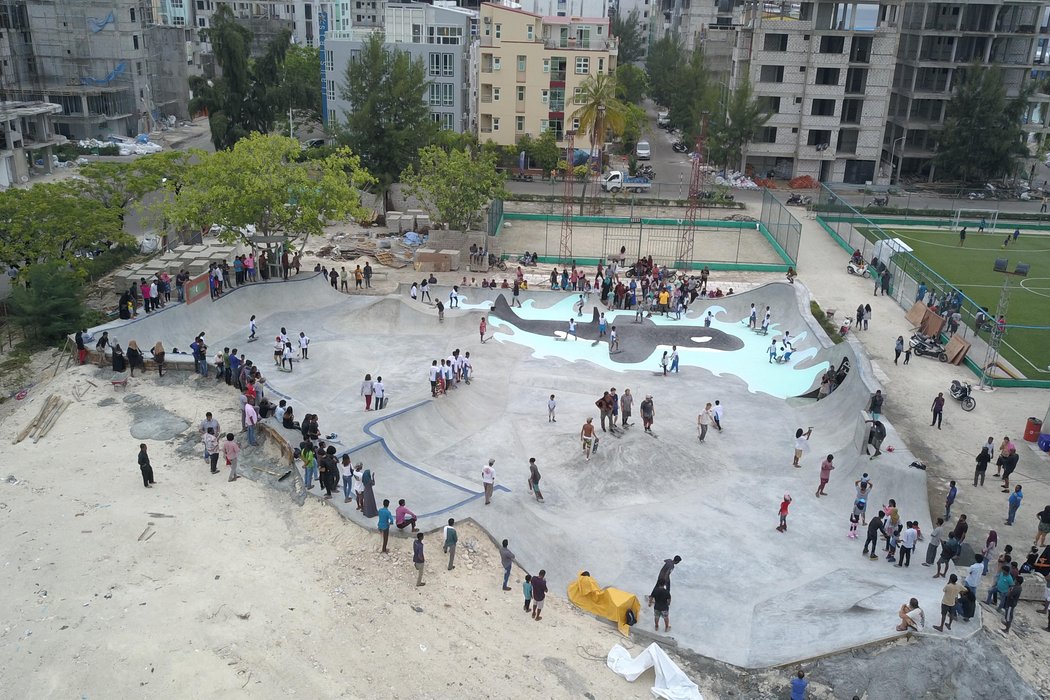 The Hulhumale’ Skatepark, roughly 10,000 square meters in size, is located in a fairly new reclaimed area of Hulhumale’ and is open and free to use for the public. Skateboarding lessons are also offered for those who want to learn.
“Skateboarding is so much more than just skateboarding, it’s so much more than just the wheels.” Albert comments. “There is so much camaraderie and so much inspiration. I hope the kids will let their imagination flow free and the Maldivians will take this all into their own hands.” 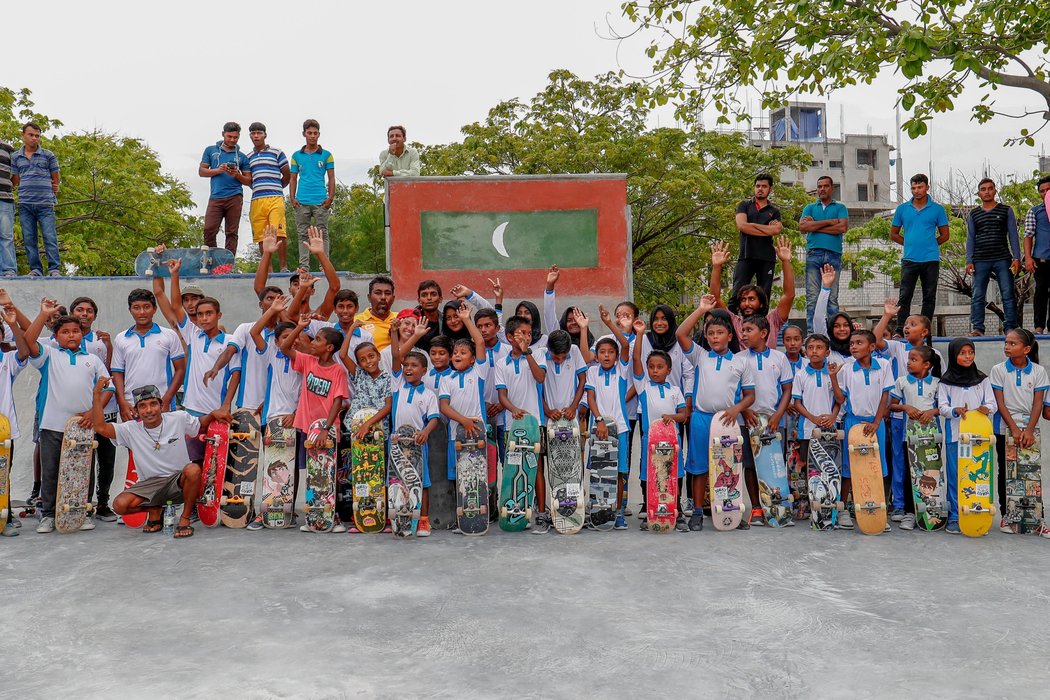 The future of skateboarding © MOHAMED AHSAN