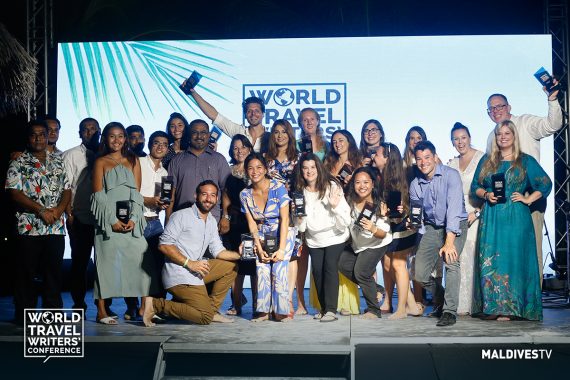 The gala night of WTWC 2017 was held to bring together the participants, including writers, photographers, bloggers, as well as partners and sponsors of the conference.

The night began with some participants of the conference going up on stage and speaking about their experience during the WTWC 2017. Stuart Forster, Gina Samarotto and Elizabeth Carlson spoke about their respective field of experience and how it could be used to promote a destination.

Prior to concluding the night, Managing Director Ibrahim Khaleel launched World Travel Writers Conference 2018. Speaking after WTWC 2018 was launched, Director of Marketing and E-commerce Ibrahim Nasreen said the World Travel Writers Conference 2018 will be bigger and better. Nareen noted that the next conference will go beyond Maldives and expand the event. He said the next edition will be bigger and better with more sponsors, more participants.

Full details are available from the link below:
Advertisements