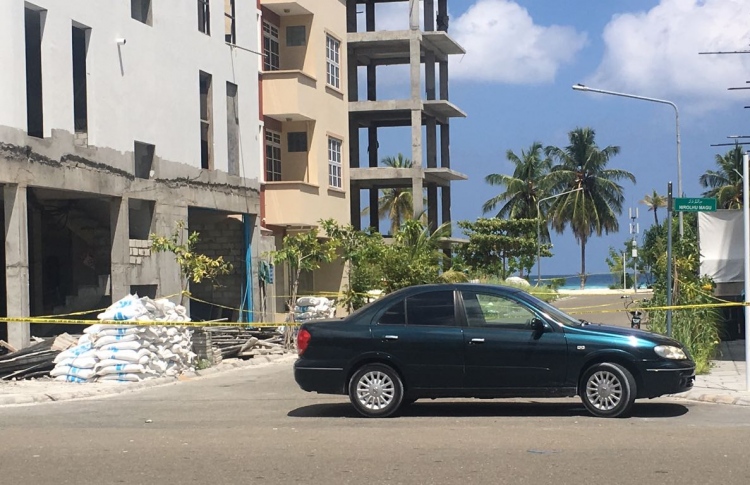 The area in the reclaimed suburb Hulhumale where the group of friends were partying, when two of their friends passed away. PHOTO / MIHAARU

The capital Male and the area that surrounds it saw a tragic weekend the past two days with two youths dying under suspicious circumstances, one person being fatally stabbed in Hulhumale, and another person stabbed near the house of parliament in Male.

The grim weekend began on Thursday night with two individuals – Ahmed Hamin, 21, and Fathmath Sama, 18, passing away after experiencing chest pains during a party where illicit narcotics were involved.

According to sources, the two individuals, with a group of their close friends, were celebrating one of their friends’ birthdays at a guesthouse in Hulhumale when things went south.

Reportedly, Hamin, who works at the Hulhumale branch of Bank of Maldives Ltd (BML), was the first to experience chest pains whilst under the influence of a “party drug” at their hotel room. His friends had tried to help him alleviate the pain; however, the 24-year-old died shortly after he started experiencing the pains, the source said.

The office of the universal healthcare system ‘Aasandha’ reported the individual being brought to Hulhumale Hospital at around 8:30 p.m. on Thursday night. He was dead when he was brought to the hospital, ‘Aasandha’ office said.

Fathmath Sama, 18 (L) and Ahmed Hamin, 21 (R) – the two individuals who passed away after experiencing chest pains whilst under the influence of illicit substances —

When the news first surfaced of the two tragic deaths in Hulhumale, it was reported that one individual had drowned. The hospital confirmed that neither had drowned, and that the deaths were drug-related.

Mihaaru is aware that some of the substances that the group were using include hallucinogens such as LSD, and other substances such as ecstasy.

“They had paired the drugs with energy drinks. And it was [their] first time trying the drugs,” the source had claimed.

Hulhumale Hospital reported treating some of the deceased’s friends for shock after the incident.

Over 12 allegations against the friends at the scene

Following the incident, the police arrested and remanded four individuals who were at the scene when Hamin and Sama passed away. They were remanded for 15-days by the Criminal Court.

The police are seeking to file 12 different charges against the four friends under the Narcotic Drugs Act.

No further details regarding the charges they are seeking or the details of the case were divulged to the public.

The police have warned of an increased use of “party drugs” amongst the Maldives’ youth as of late. These drugs are deemed especially dangerous because the substances available in the Maldives are mostly “a mixture of different substances”, a police forensic expert said.

“These chemical fusions could result in strokes, cause heart rate to increase dramatically, and other such symptoms,” he said.

The police reported finding different substances at the hotel room where the incident took place.