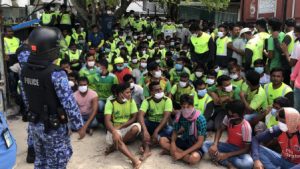 When the Maldives Police Service received information of this, a team from the Public Safety and Response Unit of the Special Operations Department was deployed to the scene. A total of 41 expatriate workers have been arrested in relation to this and they are now under investigation for criminal offences.

The Maldives Police Service strongly condemns such violent behaviours that put life and property of the public and security services at risk. Police have assured the public that strict legal action will be taken against those who commit such violence and unlawful activities and will not hesitate to take legal action against anyone who promotes or commit violence in these situations.

The Maldives Police Service advises not to resort to violence in the name of industrial conflicts and requests everyone to seek legal measures to resolve issues such as unpaid wages and other contractual disagreements between employees and employers.