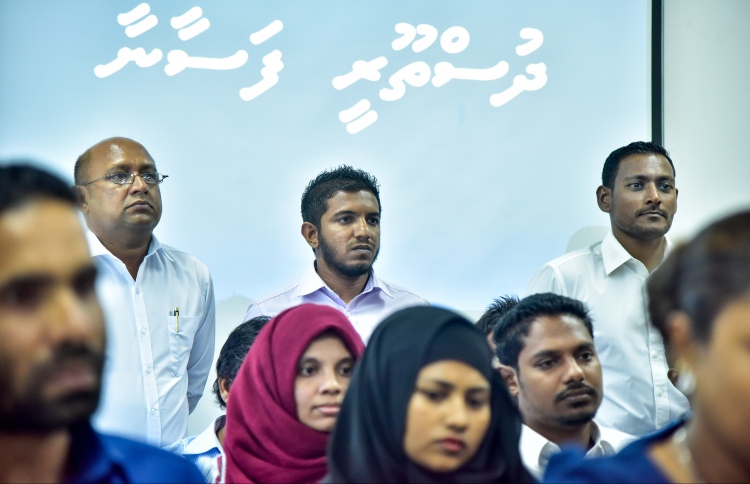 Some of the suspended lawyers pictured at a press conference. PHOTO: NISHAN ALI/MIHAARU

The Department of Judicial Administration (DJA) on Wednesday revoked the suspension of eight more lawyers who were suspended for submitting a petition to the Supreme Court raising concerns about the judiciary and calling to uphold the rule of law.

Fifty-four lawyers submitted the petition on September 10, which resulted in the DJA suspending them indefinitely. It had declared that the lawyers gathered at the apex court unlawfully and that they had obstructed the independence of the whole judiciary.

DJA on Wednesday revealed that it is terminating the suspension of the eight lawyers after concluding its investigation into their alleged misconduct. However, no further details of the lawyers’ cases were disclosed.

The DJA has since revoked the suspension of 29 lawyers; however, 17 lawyers still remain barred from court.

Since the lawyers’ suspension, 34 other legal representatives had also submitted a petition to the Supreme Court late in September, appealing the rights of the suspended lawyers and calling to reinstate them until DJA concluded its investigations.

Seven of the suspended lawyers had even filed a lawsuit at the Civil Court, seeking a court verdict stating that DJA is not an institute authorised to suspend legal advocates.

The DJA had alleged that the 54 lawyers were also in violation of the Judicature Act, the lawyers’ pledge, regulations to prevent contempt of court, and the regulations of the Supreme Court, by filing the petition which resulted in their suspension.