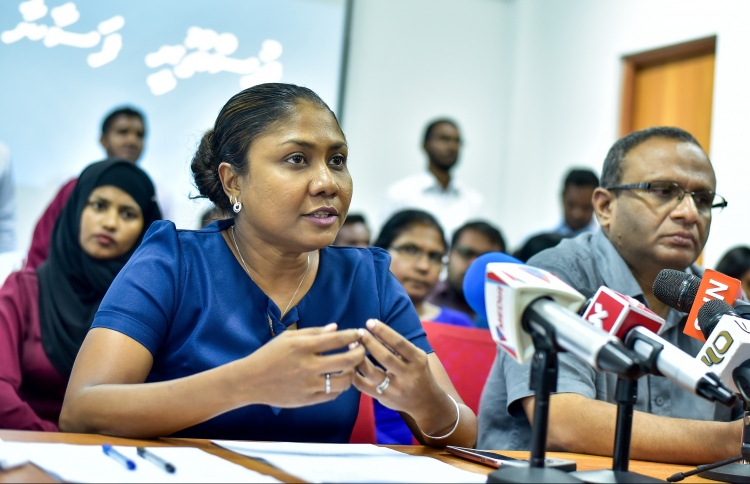 Hisaan Hussain (L) and Husnu al-Suood, two of 54 lawyers suspended for submitting an “unlawful” petition to the Supreme Court, speak to the press regarding their suspension and the petition. PHOTO: NISHAN ALI/MIHAARU

The Department of Judicial Administration (DJA) on Monday revoked the suspension of 13 lawyers, who were among 54 legal representatives suspended for submitting a petition to the Supreme Court raising concerns about the judiciary and calling to uphold the rule of law.

In a new notice on Monday, DJA stated that it is terminating the suspension of 13 lawyers after completing its investigation into their cases of alleged misconduct. Hence, the said lawyers can resume their duties from Monday onwards.

In its earlier statement regarding the suspension, DJA had warned that the administration will look into the cases of all the lawyers who signed the petition. DJA said that their suspension will be in place indefinitely until the end of the investigations.

Meanwhile, several high profile legal representatives, including the former Chief Justice Ahmed Faiz, have stepped forward with another petition to defend the rights of the suspended lawyers. The petition, filed by 35 advocates, highlighted how due procedure suggests taking action against someone who has been accused of a wrongdoing only after their involvement has been indefinitely proven. Therefore, the new petition stated that it would be in the best interest of the suspended lawyers to let them practise till DJA officially finds them guilty of misconduct.