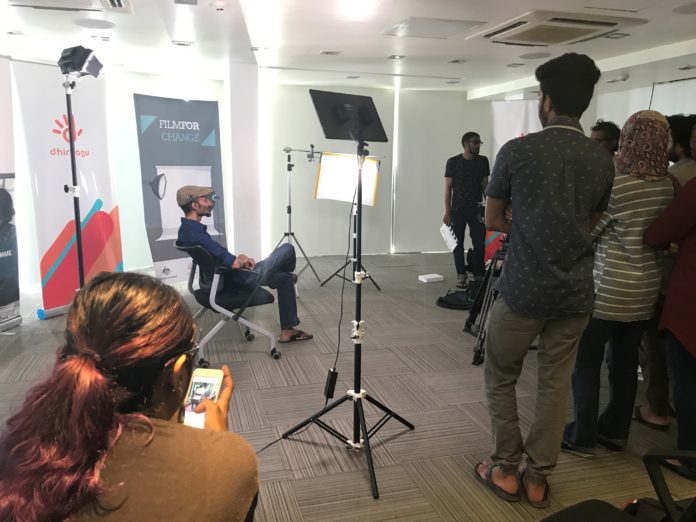 UNDP and Dhiraagu have announced the production phase of the Film for Change training which took place from 16th  – 23rd August 2017.

During the week-long training, participants learned about the basics of narrative, direction, videography and production. The workshop was taught by industry experts and professionals, some of whom will also mentor the participants during the production of the short films. Eternal Pictures, Madhoshi and Streak are the mentors of the programme. Following the culmination of the training, the participants were grouped into three groups, to work on their short films which were inspired by the Sustainable Development Goals (SDGs), Specifically the SDG 5 (Gender Equality),  SDG 10 (Reduced Inequities) and SDG 12 (Responsible Consumption and Production).  Based on the SDG’s they have chosen, the teams identified themes focusing on social issues prevalent in the country. The teams will now focus on developing films focusing on plastic & ocean, inequalities & mental health and gender inequalities in the community.

The films will be screened publicly the schedule of which will be shared on a later date.  The screening will support to create dialogue on different social issues amongst young people, decision makers and the wider community. The films will also be screened via social media.

Film for Change is a joint project by UNDP and Dhiraagu to empower young people to explore and form narratives on issues of societal significance through the medium of film. Youth empowerment is a key focus area of Dhiraagu and the company is proud of its involvement in the project which explores mobile phones and tablets as film-making tools, and which complements the company’s vision to use digital solutions as a means for youth empowerment and social development.