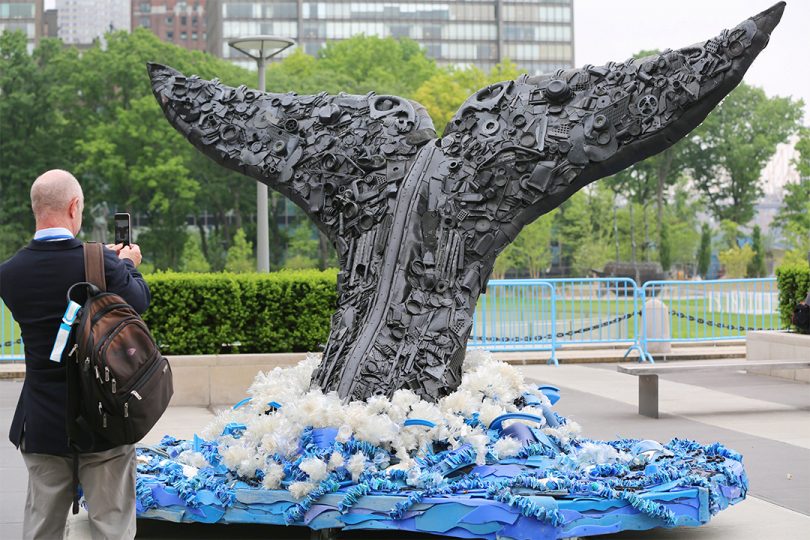 12 September 2017: Canada and Maldives have joined UN Environment’s Clean Seas Campaign to eliminate marine litter, bringing the total number of countries to 26. The Campaign aims to engage governments, the private sector, civil society and the public in tackling the causes of marine litter by targeting the production and consumption of non-recoverable and single-use plastic.

According to UN Environment, plastics make up 90% of litter in oceans, with over 8 million tonnes of plastic ending up in the world’s oceans each year. UN Environment launched the Clean Seas Campaign in February 2017. The Campaign calls on governments, industry and citizens to end single-use plastic and eliminate microplastics in cosmetics within the next five years.

Canada, which has the world’s longest coastline, has committed to prevent pollution, research the impacts of microplastics in the aquatic environment and biota and provide funding for community-based programs to tackle marine plastics, such as coastal cleanups. The Government of Canada has already published regulations that prohibit the manufacture, import and sale of toiletries that contain plastic microbeads. Jonathan Wilkinson, Parliamentary Secretary to the Minister of Environment and Climate Change Canada, stressed Canada’s “resolve to protect and enhance Canada’s coastlines and its oceans” and play a leadership role in addressing environmental concerns. The Government of Canada announced the commitment during the World Environmental Education Congress.

Maldives committed to a national campaign to raise awareness on and reduce single-use plastics as well as to reduce and collect plastics already in the ocean. Maldives pledged its commitment to the campaign at the Second Forum of Ministers and Environment Authorities, which highlighted the need to address marine litter and microplastics. In the Asia-Pacific region, which accounts for 60 to 70% of ocean plastic pollution, Indonesia, Kiribati and the Philippines have already committed to the Campaign.

Kenya banned plastic bags with a law that imposes fines or jail time on anyone caught producing, selling or using plastic bags.

Kenya has also banned plastic bags, with a law that imposes fines or jail time on anyone caught producing, selling or using plastic bags. Other countries that have previously announced commitments to the Campaign include Belgium, Costa Rica, France, Grenada, Norway, Panama, Rwanda, Saint Lucia, Sierra Leone, Sweden and Uruguay.

Also on efforts to reduce plastic in the oceans, the Volvo Ocean Race is partnering with UN Environment on the 2017-18 edition of the race. One of the Volvo Ocean’s 65 boats will race under the Campaign’s name, ‘Turn the Tide on Plastic,’ with the aim of raising awareness on plastic waste in the oceans. British Dee Caffari, the first woman to sail solo, non-stop, around the world in both directions, will captain the ‘Turn the Tide on Plastic’ boat during the 45,000-nautical mile race. The race crosses four oceans, touches six continents and visits 12 host cities, six of which will host ocean summits to bring together stakeholders to address marine pollution.