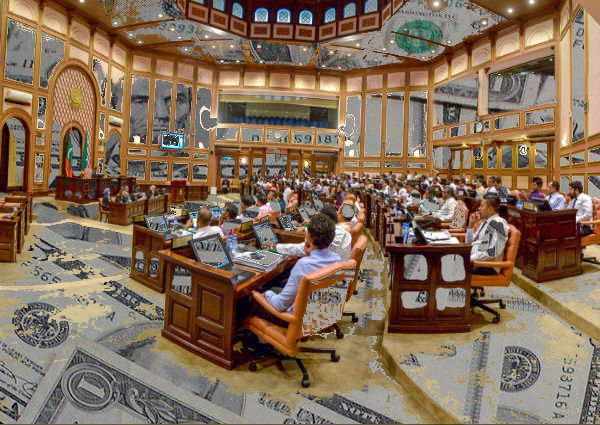 The original Dhivehi article, by reporter Ahmed Abdullah Saeed, was published on the Mihaaru.com website on 23 February, 2017.

If you have to live with differing political opinions, then what you will hear constantly is criticism. One party’s complaints about the other’s actions or policies. Even if what is undertaken is with a good intention, the competing politicians will project that as something with no benefits or as something bad. However, even in the event that political parties have become polarised, it  should not go to a level where public confidence in the three powers of the state becomes questionable.

Confidence in  the Government?

When looking at governing, there are two aspects that have emerged which have caused the public to lose confidence. The first is the stain of corruption which started with the present government. Some of the accused of the MMPRC corruption scandal are now serving terms in jail. But this did not close the issue; this is evident from the reports that are being published by the Anti Corruption Commission and the Auditor General’s Office. Even though some reports of the ACC deems some cases as free of corruption, the way those incidents have happened has cast a doubt on the decisions of the ACC.

“The way some of the state owned enterprises are running cannot be trusted. They have boasted in front of the media, saying that they will run it the way they want and no one can do anything about it,” said a member of parliament.

“That was also a comment to counter a corruption allegation. But the person who said that does not realise that he is only [temporarily] taking responsibility for the state’s and public’s money and property, and this is not his own.”

“One day, while I was in office, there was a form on my desk to sign up to be a member of PPM. There was not direct forcing to sign. But I knew what happened to those who did not sign. Next, they said that the form has to be filled and returned by a certain hour, then what will happen?” said a staff member of a state owned enterprise.

In the current political system of Maldives the Parliament is the power to oversee the other two powers of the state. Parliament members cannot be questioned or investigated by any government institution on what the member has expressed in the Parliament. And no court can conduct a trial on what was said on the floor of the Parliament by a member.

“How can you trust? They make and change laws within a time-frame of only 24 hours. The way the Auditor General was removed. Removal of former Chief Justice and another Supreme Court Judge. Removal of the former Vice President Dr. Jameel, land sale amendment, the way former Vice President Adeeb was removed. These are dirty acts that have happened in the Parliament,” said a lawyer.

Some members of Parliament suspect that now there is no longer a role of the opposition in the decisions of the Parliament. The Parliament is incapable of summoning government offices and independent institutions to make them answerable. That is happening because the ruling party members oppose such action.

Other than that, the fact that the voice of the opposition is being stifled in Parliament is another reason why Parliament cannot be trusted anymore. It has become a habit to reject any proposal by an opposition member to any bill even at the committee stage, and even if it is good. And whenever a member of the government proposes any changes, even if it compromises the public interest, that amendment passes with the majority of the ruling party members.

Another lawyer described the Parliament as a place to make “deals” between the ruling and the opposition parties. Bills are passed through deals with the opposition. Even if the opposition members are seen as vehemently protesting the proposals in the live telecast sessions of the Parliament, he suspects that there are deals made under the table. The living example is when some leading members of MDP  supported the changes proposed to the constitution in return for  the jail sentence of President Nasheed to be changed to house arrest, and also voting along with the ruling party to oust the then Vice President Dr. Jameel.

What is the condition of the Judiciary?

The decisions of the court being the final verdict does not mean that it’s forbidden to criticise the verdict. And also, it is not compulsory to accept each and every decision of the court. This is why it is allowed to appeal decisions of lower courts at the High Court and verdicts of the High Court can be appealed at the Supreme Court.

Most recently, what happened was that, because of a judgement by the Civil Court Judge Mariyam Waheed,  her legitimacy, and capacity, and mandate, was deemed null and void by the Supreme Court. When all three were removed, which resulted in the Judge losing her status as a Judge, has resulted in the people criticising the Supreme Court for this action .

“Judges can only be removed by Parliament. When the Supreme Court deems that the Judge has no mandate, that is effectively removing the Judge”

Last week, Maafannu North Constituency Member Imtihiyaz Fahmy said in a Parliament session that,  when the constitution clearly states that a Judge can only be removed by the Parliament, that decision  by the Supreme Court is unconstitutional.

Inthi says that because of similar repeated actions by the Judiciary, the public confidence in them is now lost.

“The strength of the Judiciary is to gain public confidence. Maldives Judiciary has failed to achieve that,” Inthi said.

The public should always be confident of the three powers of the state. If the people in the respective positions abuse their authority and put forward their own interest then they are destroying  the ways of the entire nation. Even tomorrow and even if they leave their respective positions it’s the public who will remain to face them.