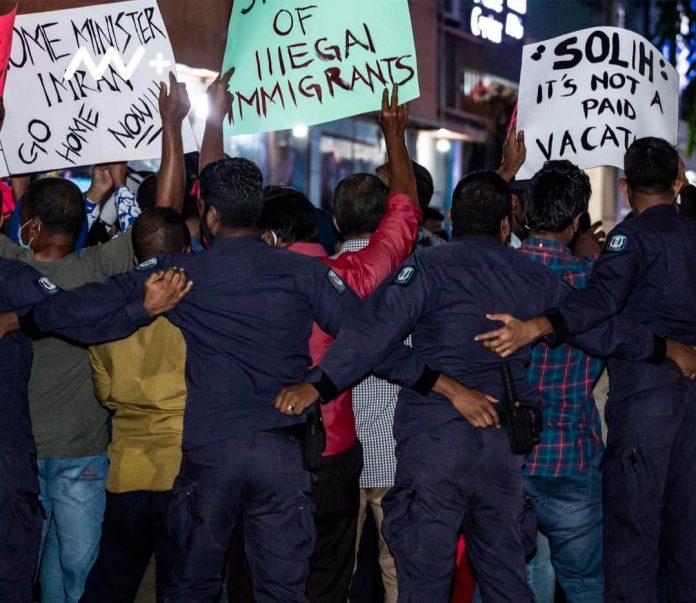 The number of undocumented expatriate workers living illegally in the Maldives who have been sent back home has crossed 4000. In the country, foreign employment has been a significant issue that seems to be growing over the years. Recently, it has been informed that 110,000 expatriates immigrated to the Maldives within 5 years. This is around 60 workers immigrated per day- an increase of 37 people over the average number of live births in the country!

The government has disclosed that approximately 100,000 undocumented workers are residing illegally in the Maldives without valid documentation and/or passports. However, the country will begin imposing fines on expatriate workers residing in the nation without proper documentation such as the employer visa soon. The serious issue once again came into highlights as the Maldives re-opened borders on 15th July.

Just 2 weeks since the country opened borders, a total of 266 foreigners arrived for employment. From this, 123 were citizens of neighbouring Sri Lanka, 36 from India, and 13 from Turkey. On 23rd July, the President of Asset Recovery Commission revealed that 110,000 expatriates in the past 5 years to the Maldives is a 25% increase in the country’s population. It has to be thoroughly checked whether the rate of this increase has benefited the economy.

The increase in the number of expatriates in the Maldives carries several demerits. The Chief of Defense Force Abdullah Shamaal stated that the recent disputes due to expatriates’ actions are equal to foreigners taking over the nation. While companies proceed to hire foreigners for certain tasks due to lower wage costs, the number of job opportunities available for locals is reduced.

The former captain of MNDF Ali Ihusaan, talking about the solutions to this severe issue, reveals that it is important to differentiate foreign workers who wish to work in the Maldives and those who want to return to their home country. From those working, identify skilled and unskilled workers. Companies should also be given a limit of hiring foreign workers in order to ensure that jobs are available to locals.