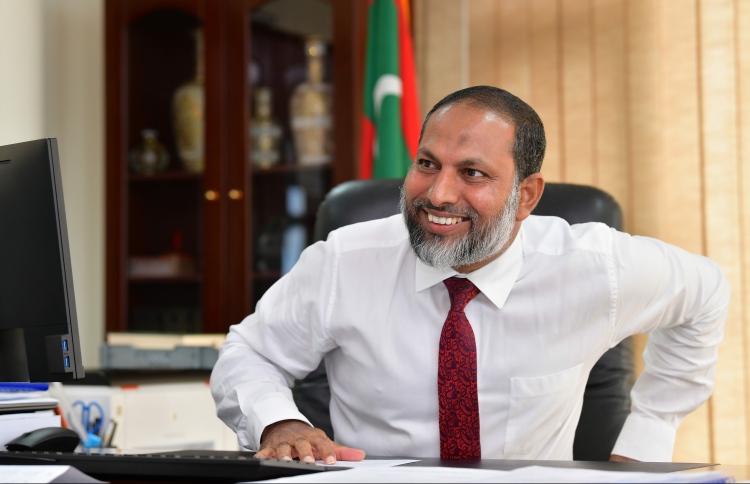 Minister of Home Affairs Imran Abdulla, on Tuesday, asserted that while the Solih administration did not intend to repeal the prickly restriction set on Section 24(f) of the Freedom of Peaceful Assembly Act (2013), amendments to the legislation would be proposed.

The statement was made during a meeting held by the Parliamentary Committee on National Security and Foreign Relations, attended virtually by Minister Imran.

Responding to a question posed by a representative within the committee, Imran acknowledged that the law needed to be revised and that in its present form, the Act did infringe upon the constitutional rights afforded to the Maldivian people.

“I accept that, at present, the section [24 of the Peaceful Assembly Act ] does diminish constitutional rights”, he said.

The minister then added, “That said, in my opinion, the best way forward when proposing an amendment or alteration unanimously agreed upon by all, is to ensure that said change is the most advantageous [option] or will best serve interests”.

Minister Imran then explained that the better way ahead would be to ensure there were no limitations to the people’s freedom to rally, securing their safety in doing so while circumventing any issues that may arise.

According to Imran, “declaring a green zone may be one [remedy]. Establishing a certain time frame could be one. “

He then countered, “Strictly speaking, even I don’t have any suggestion to suddenly propose at this time. However, I do believe it should be amended. At the moment [it is] very restrictive. Made very narrow”.

The minister did not clarify whether the points he raised would make an appearance in the proposed amendments, however, he agreed to submit an amendment within the next weeks, attributing the extended time period to added responsibilities pertaining to the ongoing COVID19 pandemic.

“Therefore, if it is possible to amend this section of the law to allow [demonstrations] in a manner that is different [from the above], then that may be the best course of action”.

He then proposed the state make alterations such as allotting further areas to hold demonstrations.

Stating that rallies held after attaining permits from police authorities, and demonstrations held without were two very different situations, Inspector Shareef said that the latter posed risk to ordinary citizens.

With the above justification, Shareef confirmed that the Police’s official position on the matter was to not revoke the amendment.

The remarks delivered by the Home Minister and Police representatives sparked negative reactions from across the parliamentary audience.

Representative for Male’ City’s Villimale’ constituency, Ahmed Usham reminded the meeting’s attendees that repealing the amendment brought to the peaceful assembly act in 2016, at a time when the incumbent MDP administration was taking to the streets in opposition, was an electoral pledge made by President Ibrahim Mohamed Solih.

MP Usham highlighted that President Solih had previously described the amendment as one that “did not require compliance”.

“To amend this is to act in favour of a presidential pledge”, said the MP. “Therefore, my third question is, what is the reason driving you all to not act on a matter that the president vowed to see done, in front of the people?”

Responding to Usham’s query, committee chair and parliamentary representative for Addu City’s Maradhoo constituency Ibrahim ‘Mavota’ Shareef expressed his belief that the issue was one that neither Police nor the Ministry of Home Affairs, was required to address.

MP Shareef then asserted that, as the legislature in question was passed by the parliament, decisions over amending and enacting did to the two institutions.

“[I] do not envisage police being able to defy a decision made by the President. However, police are obliged to abide by the constitution. Therefore, [they must act] as the law dictates”, said MP Shareef.

The amendment granted the Yameen administration powers to impose limitations on assemblies, and was, at the time harshly condemned by then-opposition now ruling party MDP as being “dictatorial” and a “direct violation of fundamental rights”.

Years after President Solih took office following MDP’s win at the polls, and months after the party attaining super-majority in the parliament, the electoral pledge remained unfulfilled but the law was seldom enforced until the home ministry’s announcement in July this year.

On July 14, citing the ongoing COVID19 pandemic and state of a public health emergency, the Ministry of Home Affairs outlawed protests and all forms of public gatherings without “prior written approval by Maldives Police Service”.

The administration’s order to acquire written approval from police prior to an assembly came after multiple protests were staged during the month of July, including marches by exploited expatriate workers demanding unpaid wages, child and women rights groups, as well as by the opposition coalition.

Meanwhile, the Health Protection Agency had officially begun easing the restrictions implemented in response to the local viral outbreak.

In the aftermath of the state’s decision, Maldives’ Bar Council called on the government to reverse the restrictions, declaring that the administrative order was in contravention of the Constitution and international obligations of Maldives.

Numerous rights groups, activists, parliamentarians and other local entities, including the international NGO Human Rights Watch, have also since slammed the government’s decision as being a clear violation of fundamental rights.

A reason to remain in limbo

Prior to that, speaking at a meeting held by the Parliamentary Committee on National Security and Foreign Relations in November 2019, Home Minister Imran Abdulla suggested that abolishing the amendment may disrupt the system.

Then during a committee meeting, when MP Usham raised a query regarding the progress of the motion, MP Shareef answered that Jabir had informed him that he was revoking the bill.

He then noted that relevant authorities of the current administration had advised that passing MP Jabir’s motion as it is, and granting the right to stage protests anywhere, is “not a good decision”, as it could threaten societal peace and harmony.

MP Usham shot back that the freedom of assembly was limited due to a decision of the government rather than a legal issue and urged the committee to make a decision on MP Jabir’s bill, instead of “leaving it parked” at the committee.

His request was supported by other members present at the particular committee meeting as well.