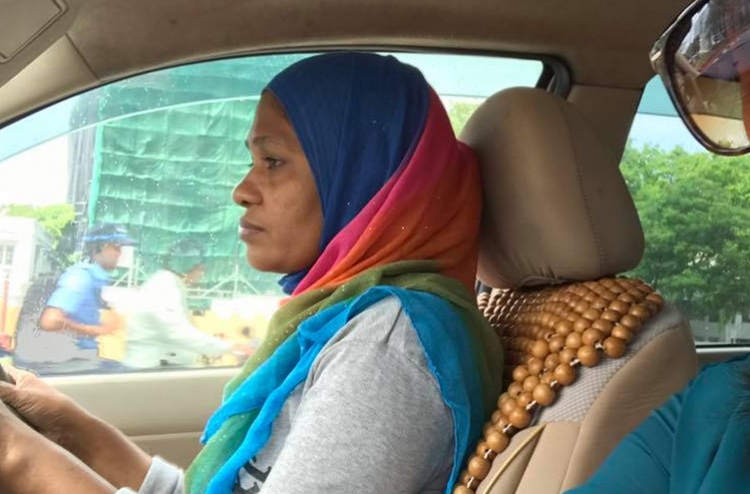 After working for 17 years as a cashier in a company, Aminath Waheeda (Ainthu) decided to take a whole new direction. This time she chose something which gives her the flexibility to attend to her responsibilities as a mother and a wife. This isn’t the only big change that came into Ainthu’s life – when she took to the wheels her name is written in the modern history of the Maldives as a person who took a big step forward in empowering Maldivian women.

In big areas of the Maldives like Laamu Atoll and Addu city, female drivers appear though less frequently to give taxi service. It was in 2000’s, a woman driver emerged making her the first female taxi driver.

However, this time it is a first for a woman to drive full-time in an owned vehicle, in the densely populated Malé (fifth most densely populated in the world), the capital of the Maldives, home to 100,000s, with more than 1000s of vehicle traffic, where some roads are found extremely narrow.

It has been just two weeks since she earned this respective title.

Even though, leaving out the actual reason why she decided to become a taxi driver, she says it is to support her kids and that her kids supported her.

‘I only had the courage to go out and taxi because of my kids and stepkid’s encouragement,’ the 40-year old who has a 12-year-old boy and 23-year-old girl, said.

Driving cars was always something she wanted to do. To this day, her husband had always been a taxi driver. The couple owns 2 second-hand cars to which they make monthly payments on an installment basis.

Ainthu wanted to start doing something where she can spend more time with her family. So, ultimately, looking at every angle taxi service became the most ideal job for her: she can earn a good income; handle household work and chauffeur the youngest back and forth from school and be available, as and where needed.

‘While doing this job, I have the freedom to do other things: cook and feed the kids, chaperone, take the youngest to school and tuition classes. If doing a 7-to-4 job, I would have to be present and fill up all the hours. When it comes to household work, my daughter who is the eldest helps out a lot,” Ainthu said, who migrated 23 years ago to Malé from Vaadhoo island in Gaafu Dhaalu Atoll.

Ainthu joined the New Taxi Service (Hotline: 332 5757, commonly referred locally as 57 taxi centre), after taking the driving license from a driving school, where her husband who is currently on a leave worked earlier. It took her 1 month and 10 days to obtain the license. She passed after taking the test 3 times. Now it is her greatest joy to receive words of praise and support from people.

‘The owner of the 57 taxi centre was delighted to give the job to her and the first words he said was that he was happy that when a woman decided to start driving taxi, she chose his centre,’ Ainthu said.

‘God willing, I haven’t come across anything negative from anyone so far or any reason to be unhappy (while providing taxi service). Everyone says it is a very good and bold move, something which was needed to be done.’

From that experience, it is Ainthu’s wish for more women to come and drive a taxi.

‘This is a good job even for women,’ she said.

‘I haven’t thought about quitting at all. God willing, I want to keep going.’