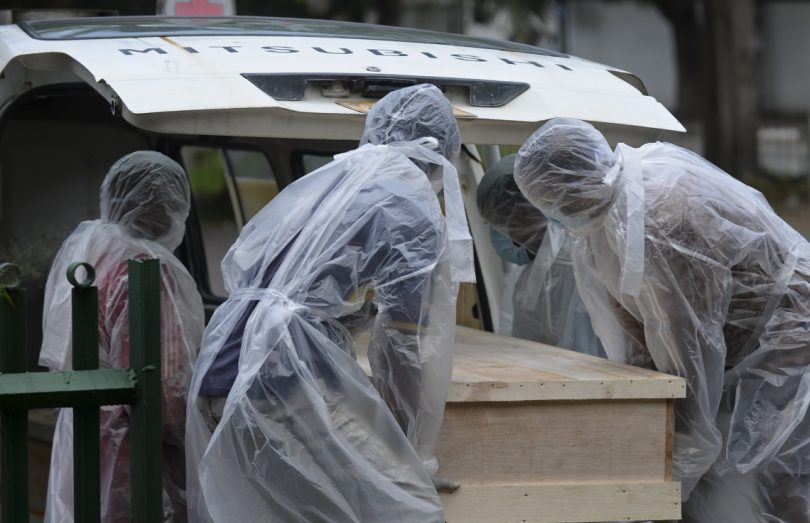 Speaking for the Sri Lankan government, cabinet spokesperson Keheliya Rambukwella, on Monday, confirmed that the country has abandoned plans to send the bodies of Muslims who died of COVID-19 to the neighbouring Maldives, for burial purposes.

When previously queried on the matter, Rambukwellah was quoted by several Sri Lankan and international newspapers denying any knowledge of such a request being discussed within the cabinet.

Though Rambukwella did not elaborate on the issue at this time, however, Sri Lanka’s Muslim leaders expect the government to grant permission within a few days, for the burial of bodies in Sri Lanka using concrete graves at Muslim cemeteries – an idea they submitted.

According to local news outlet Mihaaru, the project was initiated when Sri Lankan President Gotabaya Rajapaksa sent a letter requesting arrangement as above, to President of Maldives Ibrahim Mohamed Solih.

Shortly after, on Dec 14, Foreign Minister Abdulla Shahid revealed that the Maldivian government was holding discussions with relevant authorities as to the possibility of making burial arrangements for Sri Lankan Muslims.

Sri Lanka announced that it would cremate the bodies of all people who die of COVID-19, in order to prevent the contamination of groundwater, during early March.

Following the news, Maldivians and Sri Lankans voiced serious concerns, with many accusing former of enabling the incumbent Sri Lankan leadership’s wishes to export bodies of their dead Muslims and pushed for the Maldivian government to take a hardline over the matter, whilst encouraging the Lankan government to allow its Muslim population to bury its deceased as per religious obligations.

Thanking Maldives for its “generosity”, the letter read, “Muslims will instead demand that our government reverse it’s (sic) unjustified cremation only policy”.

Describing the actions of his government as a “denial of our [Sri Lankan National’s] fundamental rights”, Hakeem revealed that a number of the victims’ families have refused to pay cremation charges, and opted out of accepting funeral rituals in a demonstration of civic resistance.

Hakeem’s letter follows a total of 18 Sri Lankan Islamic organisations, including the 57-member Organisation of Islamic Cooperation (OIC), that are known to have urged President Ibrahim Mohamed Solih to reject the Sri Lankan government’s request to arrange burials for Muslims that succumb to COVID-19.

Meanwhile, the latest guidelines publicised by the World Health Organization (WHO) state that people who die of COVID-19 may be safely either “buried or cremated” according to “local standards and family preferences”. Further, WHO has long advocated for the safe and dignified burial of patients that succumb to a disease, in every circumstance possible, where it does not endanger or harm others.

Muslims make up nearly 10 per cent of Sri Lanka’s 21 million people. Since the decades-long war between Tamil separatists and the military ended in 2009, Lankan Muslims have faced increasing hostility from Sinhalese Buddhist nationalists.

According to Al Jazeera News, a number of radicals accuse Muslims of high birth rates and forcing people to convert to Islam to reduce Sri Lanka’s Sinhala Buddhist majority. Mobs are reported to have targeted homes and businesses of Muslims, as well as places of worship.

The animosity reached its current peak following the deadly suicide attacks on churches and hotels in April 2019, later claimed by the terrorist group ISIL (ISIS).