The original Dhivehi article was published on Mihaaru.com website on 12th September 2017.

We can still remember in 2014, when people were queueing up next to the Ministry of Housing and Infrastructure, sacrificing their sleep. Some even lined up at midnight of the day before, to submit their application form during government official hours.

I also submitted my application form thinking that if anyone from Malé shall get it, certainly I will also be eligible. My hope was slightly elevated when I received a call from the Housing Ministry, soon after I submitted my application form, saying I should expect a visit from the Housing Ministry team within 3 months to survey my current living condition.

Since submitting my application form, it will be 3 years on the 18th of this month. Most certainly, those 3 months has yet to come. Don’t know where in the Housing Ministry my form is, nor where they went to do their survey.

Nevertheless, on Monday the 11th of September, Housing Ministry published the list of 661 flat recipients, for the round of my own submission. Thus, proving that the Ministry didn’t select the flat recipients after conducting a thorough assessment of all the applicants.

Irrefutably, Housing Ministry didn’t come to survey the habitats of some applicants. Which raises the question: based on what study did the government select the flat recipients?

Even the list was published in a very questionable manner. In previous times the list had the names of the flat recipients along with their respective addresses. However this time the list just mentioned the application form number.

Which ponders the question — To whom are they giving these flats to?

‘What happens is that everyone knows each other now. People can tell who it is after reading their names. So it was done to hide their identities. When the name is stated, I can tell that the flat was given to an unmarried person, instead of someone like me, married with 3 kids, living in one room. So in that manner, when they published the list without their names and addresses, people wouldn’t be able to tell if the flat was given to a person who in fact met all the criteria to apply for a flat, or not. Not to mention how many points they scored,’ said a flat applicant who was rejected.

The source also said that the public deserves to know who got the flats and how much points they got. If not, even if the Housing Ministry asked us to file complaints, without those details nobody will be able to make a complaint. 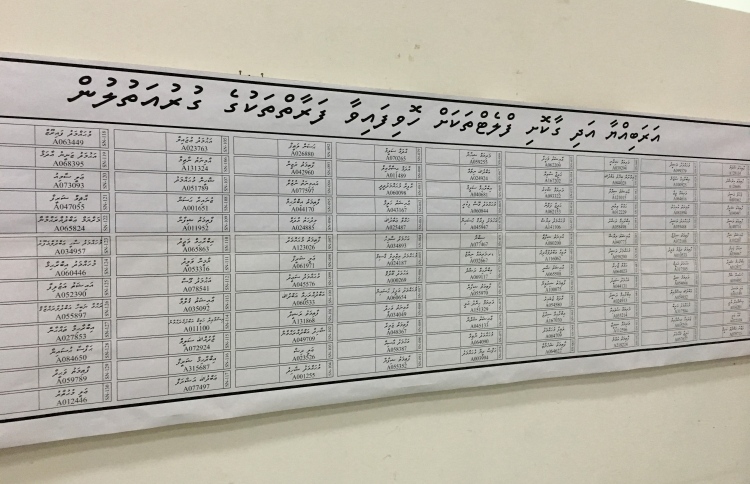 Previous lists published with names of the recipients. However, this time names were not published.

‘I am certain the government is hiding some things related to this. Or else, there is no reason why they shouldn’t publish the recipient’s details. As only then we would know whether it was carried out fairly. I doubt whether they did that honestly. Sadly, now, we won’t be able to tell whether the flat recipients on the list deserved them.’

However, Housing Minister Dr Mohamed Muizz tweeted saying that when the flat recipients’ list was published with a form number instead of their names and addresses, it was done so to protect their identities.

Even when Minister Muizz said so, when the list was revealed in such a manner, it leaves room to believe that it is not done transparently. Also when the list was out without revealing the details, instead of protecting the rights of those few, there is a higher chance of the majorities’ rights being neglected.

15,000 people applied for the flats, and only 661 made it to the list. When those recipients were not revealed, what justification is there to show to the remaining 14,340 applicants? Even if there was someone on the list who did not meet all the criteria, there is no way to complain about it.

It is a widely known fact that even previous list had people who did not meet all the criteria. Independent institutions even called out not to give out to those. Those deplorable acts are found out only when they disclose the details of flat recipients.

Instead, when they don’t disclose the flat recipients’ details and put just a form number, it makes way for corruption, instead of fairness and justice — this is a reality that we must have to accept.

When there are thousands who are renting and moving from place to place, it won’t be wrong to say that the government’s housing pledge is the slowest to be fulfilled. After taking the office with a 15,000 affordable housing provision pledge and the term almost coming to an end, the queues of those begging for housing is still not shortening.

There is also a list of those who meet the requirements and who have been waiting for 6 years. Those are the Tata flat recipients. They are also facing a huge dilemma for being selected for those flats. When they are barely able to put food on the table twice daily, in order to accommodate them, they were asked to pay a huge down payment. Which is not affordable with their monthly income.

They filed several complaints to various government institutions requesting to lower the down payment. However, without any avail, months passed and yesterday was the due date give to secure their loans.

On 28th of last month, Hulhumalé Development Corporation (HDC) sent a letter to the Tata flat recipients, enclosing application form for the bank loan. The last day to submit that form to Maldives Monetary Authority (MMA) was yesterday.

‘After making us go back and forth with this, they just announced flats for other people. This is very unfair. When they get the flats from Hulhumalé they don’t even have to face a loan. We are getting our flats after taking a 3.8 million Rufiyaa loan from some bank. Where is the justice in this?’ A Tata flat recipient said.

Another Tata flat recipient with a husband and 3 kids, living in a one room apartment, said that even after requesting for a loan there is no guarantee that it will get approved. As she and her husband are both self-employed.

‘Most Maldivians are people who run their own businesses. They don’t deposit their income to the bank. So banks don’t consider them as income earners. Banks approve a loan once when they receive the guarantee from the loan requester that the loan will be paid back. Therefore, we don’t have the guarantee of receiving a loan. They are also refusing to fill the form sent by HDC,’ lamented the disgruntled lady.