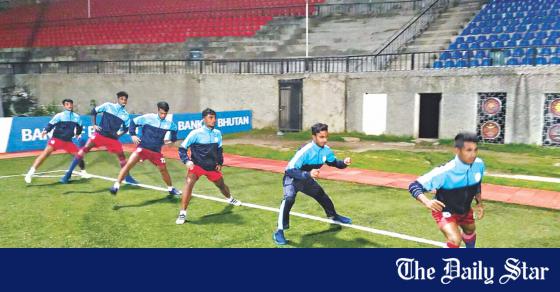 Following an incredible 4-3 win over regional powerhouse India in the opening game of the SAFF U-18 Championship, the Bangladesh team is in an upbeat mood and determined to carry their good form to the next game against Maldives, which kicks off at the Changlimithang Stadium in Bhutan at 7:00pm Bangladesh time today.

Despite going down 3-0 in the first half, the boys in red and green kept their nerve to turn the tide and scored four goals in the second half to notch an unbelievable win, which put them in pole position in the five-team round-robin league tournament.

The high pressing football from the Bangladesh players in the second half kept the opposition on their toes and that pressure eventually paid off, with four goals coming in the space of 35 second-half minutes.

Winger Jafar Iqbal, also a member of the national team, was excellent up front as he scored two goals and set up another while midfielders Al-Amin and Sohanur Rahman played key roles in midfield after some defensive lapses had put them in danger of a heavy defeat.

Following the victory, the players had some wild celebrations but the team management calmed them down and asked them to keep their feet on the ground as their aim now is to win the title.

“The boys were excited after beating India and they have been asked to stay focused as we have only won a match, not the title,” coach Mahbub Hossain Roxy said. “During my playing career I have seen Bangladesh perform poorly after making a good start. The players have been asked to keep the spirit they showed against India till the last match of the championship.”

Roxy also believes that the expectation is high now and that it would be a challenge for his side to keep the tempo.

“Bangladesh will play positively till the last minute and show their attacking attitude. Whether or not we win the match, we will play with a positive attitude and the players are being prepared that way,” said Roxy, who is being advised by national team head coach Andrew Ord.

The coach informed that they worked on the defensive errors through a video analysis session and also worked on set-pieces. The coach claimed there might be one or two changes in the starting line-up against Maldives.

“Maldives are a good side as they played good football before eventually losing 0-1 against Bhutan. So there is no reason to take them lightly. Besides, at age-group level, all teams are almost of equal strength, however, we will play to keep our winning momentum,” concluded Roxy.