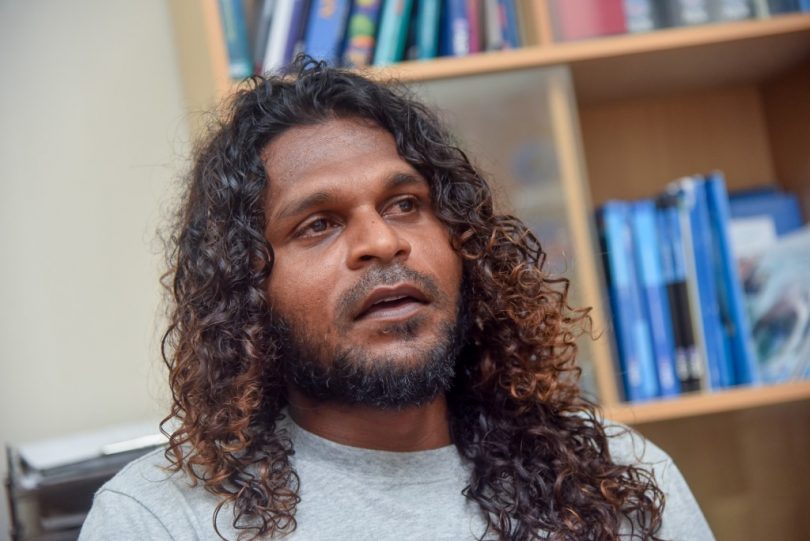 The original Dhivehi article was published on Avas.mv website on 22nd September 2017.

Maldives’ underwater beauty is something of a marvel even amongst the world. Unlike in the past, now Maldivian divers are more interested in taking up a diving career; as diving also generates a good income. Accomplished young divers are also on the rise. This remains the same on Dhigurah island in Alifu Dhaalu Atoll too The island’s Naushad Mohamed is also such a well-accomplished youth. While staying on his island he earns handsomely. He is the Manager, in charge of Island Divers located on Dhigurah island; a diving centre famous amongst other divers. 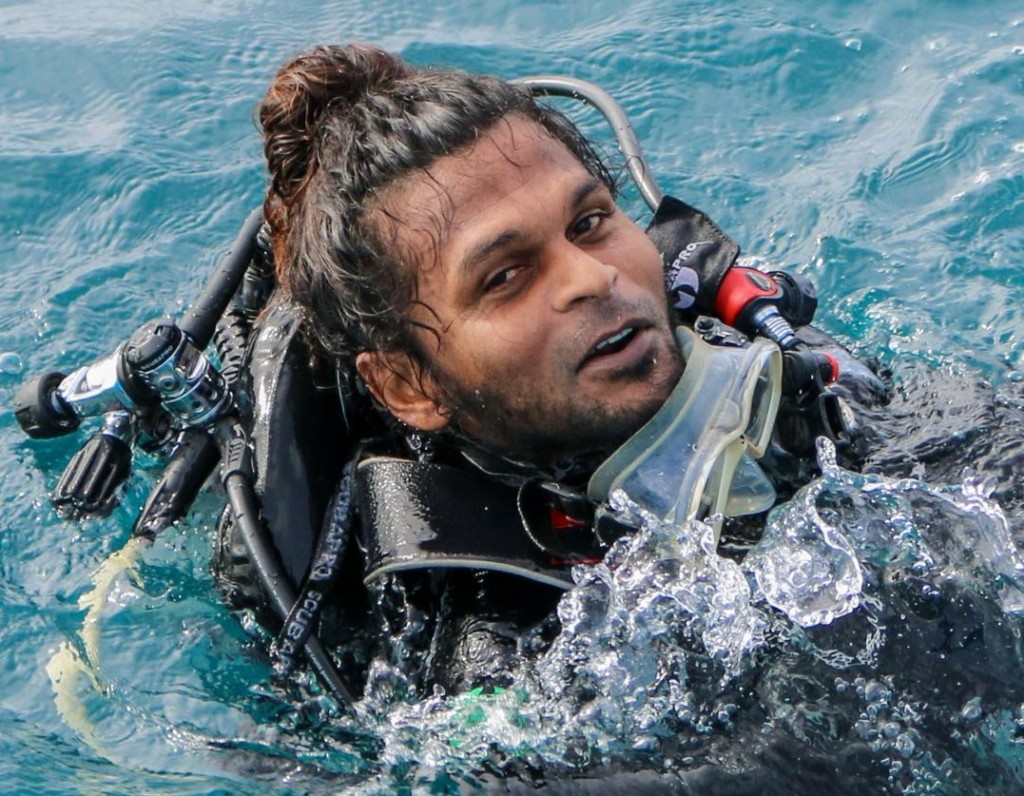 The 33-year-old diver, after finishing (Centre for Higher Secondary Education) CHSE, first started working in resorts and there he was introduced to this field in 2004. While working in resorts, Naushad got interested in diving and did an open water course. And while working at the resort, during his off-days he went to Malé and did a Dive Masters course. After that, he worked at Huvafen Fushi Maldives Resort and Spa, The Sun Siyam Iru Fushi Maldives and Velaa Private Island resort. By then he got married and had 2 kids. 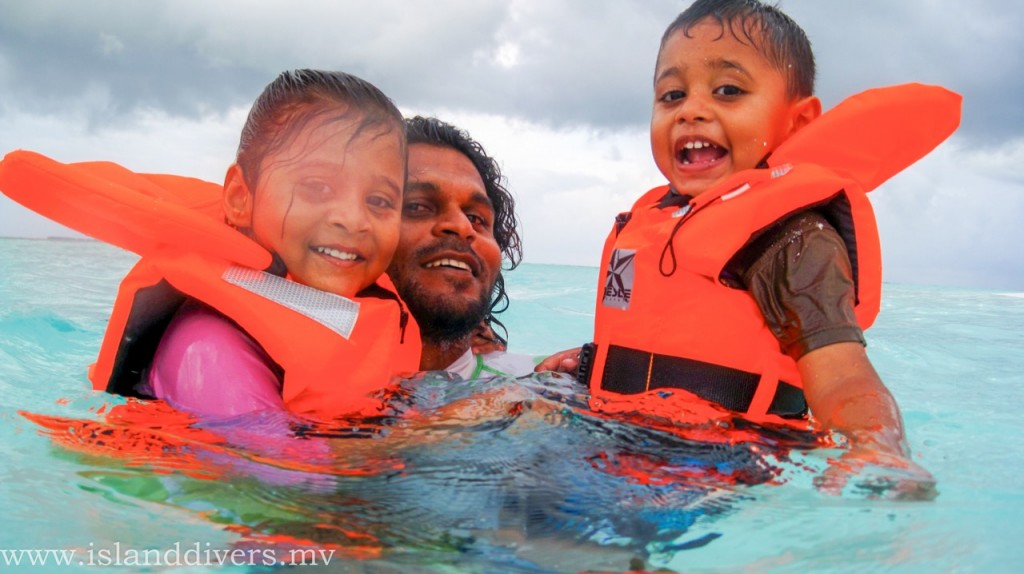 Naushad with his children

‘After having kids, I didn’t want to stay away from my family working at a resort. So I sought for a way to earn while staying on my island,’ said Naushad.

In 2012, Naushad’s life changed profoundly. It was a revolutionary change for the island; guesthouse business took off. The first guesthouse on the island was called TME Retreats guesthouse. Naushad’s dive centre and TME is almost intertwined in operations.

With the newly introduced tourism business, Naushad returned to his island and started his dive centre, while facing great challenges. On the island, there weren’t many youths to go diving. However, Naushad was a dive master and had 2 staff to work by his side.

‘Then I went back to do the Dive Instructor course in Thailand. After doing the course, I came back and trained the island’s 15 youths to divemaster level,’ he said. ‘After that, I trained 40 youths to the level that they can do fun dives.’

Apart from the local islanders of Dhigurah, youths from Malé also goes to train at his dive centre. In total, now, more than 200 youths had been trained and certified. Moreover, his dive centre also provides different diving programmes for school children.

Naushad is now a Diving Staff Instructor. He also did that course from Thailand. Whilst his dive centre conducts Dive Masters course, he is also gearing up to conduct Dive Instructor courses. He also has started to send off divers from his dive centre to nearby atolls to provide service.

His dive centre which started off with just 2 staffs, is now more than ever. The dive centres success has contributed to its popularity. Naushad is now readying to do Masters Instructor course. His target is also to do the Course Directors certification.

Naushad’s biggest satisfaction is that, along with the success of his dive centre, he was able to establish a diving community on the island. When the dive centre opened there were just 3 divers, but now the island has become a special diving island; an island known to have more divers and where there is huge popularity for diving. Even the moms also want to teach diving to their children. Therefore, younger children who have started to learn diving are more on the island. It is a change that Naushad initiated and led.

Apart from that, the dive centre makes a good earning, he is more happy to be able to stay on his island and be with his kids.

Naushad’s dive centre’s fees are in the same range as other dive centres. However, the dive centre has given a special allowance to the island’s youths. After training the youths, finding jobs, and set up a way to pay for their training. As the purpose is to make the island with more divers. 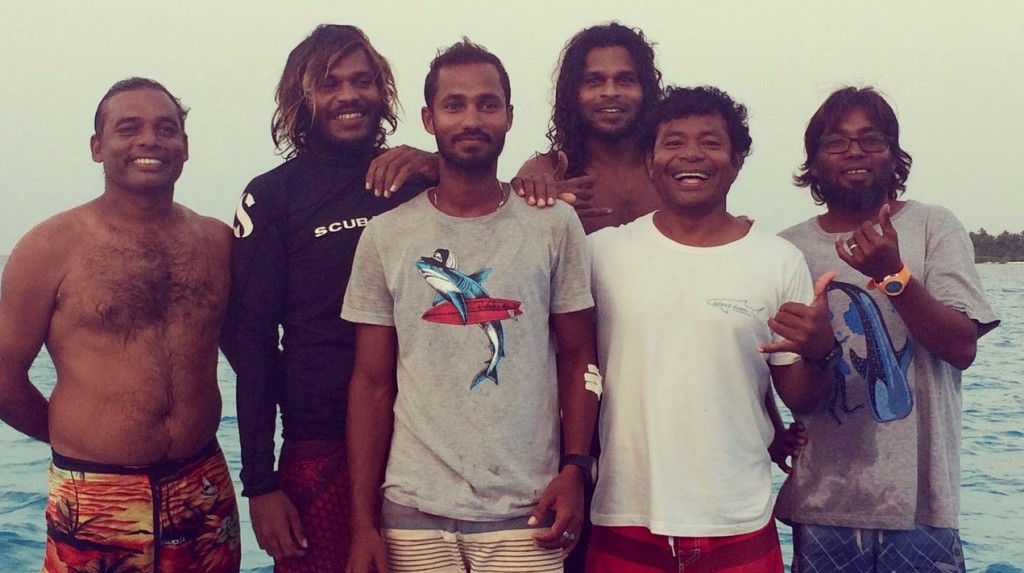 Naushad and his dive centre team

Naushad’s Island Divers dive centre usually caters to TME Retreats guests, but, they also extend their services to other guesthouses and guests of resort cruises. Since Dhigurah island is near a whale shark spot, a considerable amount of guests also come to go for whale shark excursions.

Naushad believes that in islands like Dhigurah where local tourism is thriving, diving is an ideal occupation for the youths. Since it is an area where there is scope for expansion, which will eventually lead to the creation of more jobs. Naushad believes that tourism is the perfect industry for youths to get employment. Naushad is also ready to hold hands with every youth who are keen to learn diving.