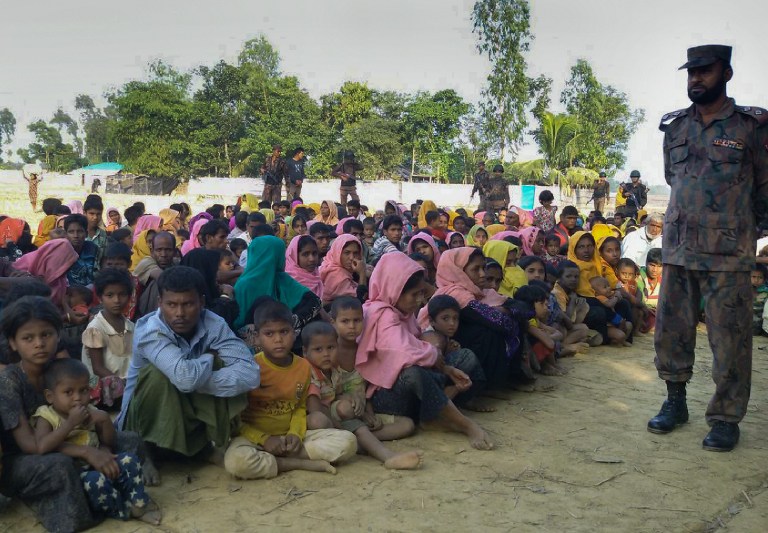 Rohingya Muslims from Myanmar, who tried to cross the Naf river into Bangladesh to escape sectarian violence, are kept under watch by Bangladeshi security officials in Teknaf on December 25, 2016.
Border Guard Bangladesh (BGB) personnel have intercepted 34 boats carrying some 340 Rohingyas at border points near Cox’s Bazar. / AFP PHOTO / STR

Local television channel Raajje TV has raised over MVR 4 million across the Maldives to relieve the plight of Rohingya Muslims that are facing persecution in Myanmar.

Raajje TV’s COO Hussain Fiyaz Moosa stated early Tuesday that over MVR 4 million were collected from capital Male and 22 islands by the time the fund boxes were closed at 8:30 p.m. on Monday night.

According to COO Fiyaz, the funds include cash donated to Raajje TV’s fund boxes, deposits in the special bank account the company opened for the cause, and donations via SMS.

Raajje TV launched the telethon to raise aid for the Rohingya on Sunday afternoon, initially planning to close the fund by midnight. However, it extended the telethon to 12:00 a.m. Tuesday upon request from the public.

Over MVR 1 million had been raised in less than ten hours from Male alone after the fundraising commenced.

Meanwhile, donations of up to MVR 200,000 have been collected from various islands, according to COO Fiyaz.

“We didn’t’ think we’d receive such support as Raajje TV is facing some issues and time constraints. We expected to raise around a million,” he said.

The funds are to be delivered to the Rohingya in the name of Maldivians via the Maldivian Red Crescent. Fiyaz added that Raajje TV has contracted an audit firm to carry out the process as transparently as possible.