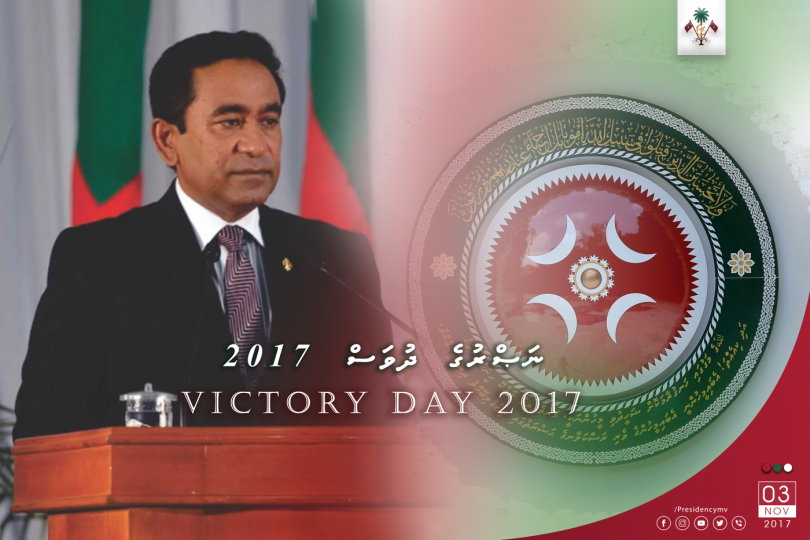 President Abdulla Yameen Abdul Gayoom has urged Maldivians to get inspired from the courage Maldivian armed forces displayed on 3rd November 1988, and insisted to be more vigilant of potential outside threats to Maldivian territory. He reiterated that we will never tolerate being under the influence of a foreign party. He made this remark in his Victory Day address to the nation.

In his address, the President has stated that the defeat of the dangerous and treacherous attack on 3rd November 1988 was the result of the determination and togetherness depicted by the Maldivian people, and also because the people dutifully complied with their leaders on that day.

Moreover, he has stated that reflecting on the traitorous attack would prove that only a few Maldivians were involved behind the plans of the attack. He further noted that we must be aware that we have such traitors among us even today. Moreover, President Yameen has stated that even today we were continuously getting equally dangerous threats both internally and externally.

In his Victory Day address, President Yameen has called upon all Maldivians to portray a strong bond of unity and obedience at all times, saying that the dangerous and treacherous attack of 3rd November 1988 will forever be etched in our hearts. Furthermore the President has stated that in order to prevent such an occurrence we must be more alert, vigilant and steadfast in defending our nation. He also highlighted the importance of boosting patriotism among all Maldivians.