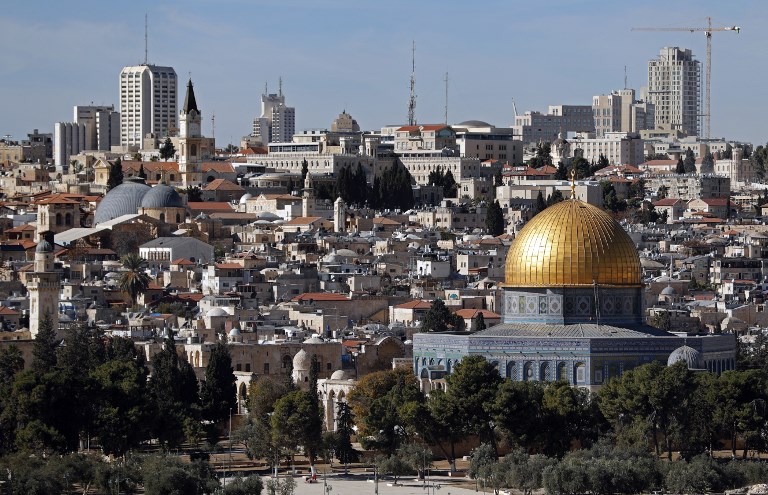 A general view of the city of Jerusalem shows the Dome of the Rock mosque (C) on December 4, 2017.
Palestinian leaders were seeking to rally diplomatic support to persuade US President Donald Trump not to recognise Jerusalem as Israel’s capital after suggestions that he planned to do so. East Jerusalem was under Jordanian control from Israel’s creation in 1948 until Israeli forces captured it during the 1967 Six-Day War. Israel later annexed it in a move not recognised by the international community. / AFP PHOTO / THOMAS COEX

Ruling Progressive Party of Maldives (PPM) on Wednesday condemned US president Donald Trump’s decision to recognize Jerusalem as Israel’s capital and move the US embassy to the holy city from Tel Aviv.

The White House has confirmed that Trump would make the announcement at 1800 GMT on Wednesday. The shocking development sparked outcry and warnings against the move from several countries, including the leaders of Saudi Arabia, Egypt, Jordan, the EU, France, Germany and Turkey, with rising fears that it could trigger more violence in the Middle East.

Commenting on the issue, PPM’s secretary general and Nilandhoo MP Abdulla Khaleel denounced Trump’s decision as an act that would violate the rights of Palestinians and the Islamic world as a whole.

He highlighted that the Maldives’ policy on the conflict between Palestine and Israel stands with decisions that do not compromise the peace of Palestine.

Khaleel declared that the Maldivian government has never recognized Jerusalem as the capital of Israel. He stated that PPM’s policy is that of the government’s, which is to seek solutions for the Palestinian-Israeli via peace talks without infringing the rights of Palestine’s citizens.

Noting that Jerusalem has sites that are key locations of sacredness for Muslims, Khaleel said, “Jerusalem should be the capital of a sovereign Palestine. Declaring it the capital of Israel is unacceptable.”

The status of Jerusalem is a central issue in the Israeli-Palestinian conflict, with both sides claiming the city as their capital. Jerusalem is also a pivotal part of a bitter centuries-old argument between Jews, Muslims and Christians, and one of the main conflicts in the Middle East.