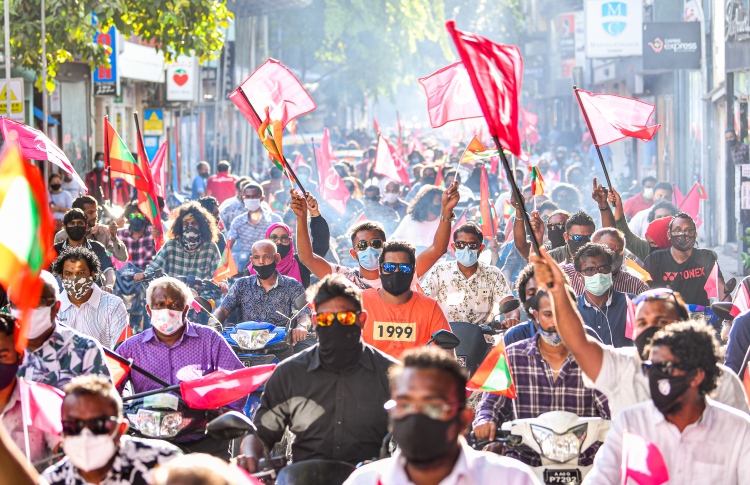 The Elections Commission (EC), on Monday, fined Progressive Party of Maldives (PPM) and People’s National Congress (PNC) with MVR 150,000 over holding protests across the country in violation of the Health Protection Agency (HPA)’s safety guidelines.

According to EC, the two opposition parties were each fined MVR 75,000 under the Political Parties Act, the Freedom of Assembly Act and the Public Health Act.

The elections watchdog has urged all political parties in the Maldives to avoid holding protests that violate COVID-19 safety guidelines.

On August 28, opposition protesters took to the streets, voicing concerns over the incumbent administration “selling off the Maldives” and calling for the released of former President Abdulla Yameen Abdul Gayoom, currently serving a five-year jail sentence on money laundering charges.

Reportedly, many individuals including prominent members of the opposition parties did not wear face masks during the protest.

As per HPA guidelines, gatherings of more than five individuals are currently prohibited while the state has also mandated face masks in public areas.

In addition to fines levied on the parties, leading members of both PPM and PNC were summoned by the police and fined with MVR 1,000 for failing to adhere to precautionary measures. These individuals include former president Dr Mohamed Waheed, PNC President Abdul Raheem Abdulla and PNC Vice President Ibrahim Shujau as well as PPM’s Vice President and parliamentary representative of Lhaviyani Atoll’s Naifaru constituency Ahmed Shiyam.

The aforementioned individuals have described the government’s issuance of summons over the protests as an act of intimidation and asserted that the opposition would continue to voice their concerns.

Furthermore, the opposition coalition claimed that former president and incumbent Parliament Speaker and Maldivian Democratic Party (MDP) leader Mohamed Nasheed is yet to be penalised for holding events in violation of coronavirus safety guidelines.

The alliance of PPM and PNC also held a series of protests in late July, voicing the same demands. However, the opposition coalition later decided against proceeding with the protests, due to the upsurge in the number of COVID-19 cases in the Maldives.

In addition to the Greater Male’ region, active virus cases are present in 31 inhabited islands and 15 resorts across the archipelago.