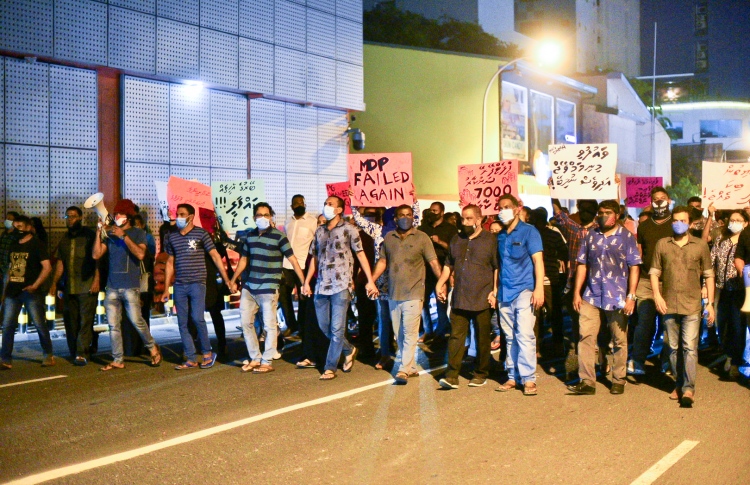 PNC vice president Nimal was ordered to present himself at 1600 hrs on July 29 while the former parliamentarian was instructed to answer the summons at 1500 hrs on the same day.

As per the police order, the Progressive Party of Maldives (PPM) and PNC staged Thursday’s protest in violation of the Freedom of Assembly Act in a manner that impeded the freedom of movement accorded to other pedestrians.

Additional accusations against the two individuals include protesting against a constitutionally elected government, encouraging citizens to break the law and obstructing law enforcement.

Attended by leading members of PPM and PNC, the procession dodged two attempts by the police to block it. Two individuals were arrested during the protest in which demonstrators demanded the resignations of President Ibrahim Mohamed Solih and severely criticized his policies.

On July 14, the Ministry of Home Affairs declared that street protests, marches, parades, and all other public gatherings could only be held with prior written approval by Maldives Police Service.

The declaration was made under Section 24 (f) of the Peaceful Assembly Act 2013, a contentious amendment ratified during former President Abdulla Yameen Abdul Gayoom’s administration in the wake of several protests held by the then-opposition and current ruling party.

Despite the government’s present stance on the issue, Maldivian Democratic Party (MDP) which was the main opposition during Yameen’s administration, had lambasted the amendment when it was first implemented, stating it was unconstitutional and in violation of the fundamental right to assembly.

In addition to several local activists, parliamentarians, rights groups and the Bar Council, the international NGO Human Rights Watch also condemned the government’s decision as a violation of fundamental rights.