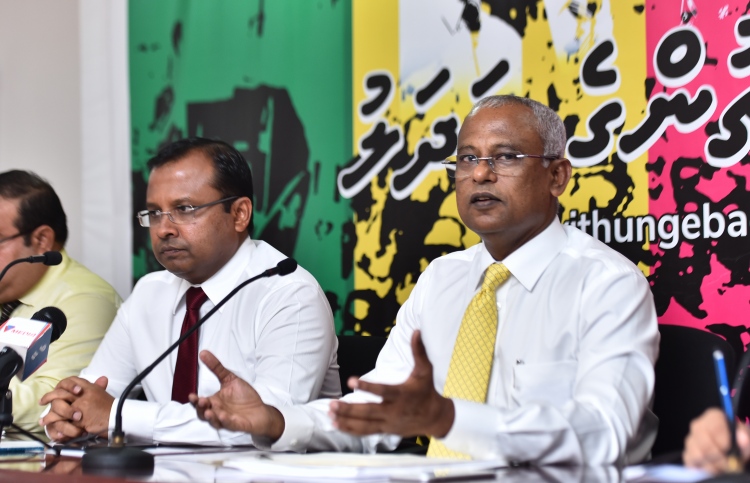 Main opposition Maldivian Democratic Party’s (MDP) parliamentary group leader Ibrahim Mohamed Solih declared that there were no proposals from the joint opposition parties yet that they could not agree on, in a press conference held at Jumhoory Party’s main hub late Monday.

The Hinnavaru constituency lawmaker Solih, who is leading the opposition coalition’s talks, said that all four parties of the coalition had submitted certain terms regarding the presidential election this year. Referring to the documents submitted by the four parties, he stated that all the parties were willing to compromise and negotiate the submissions.

When questioned whether the opposition’s presidential candidate had been discussed, he replied that it was an obvious topic in such a gathering. He went on to say that further details would be given as the discussions proceed and they would be coming to a conclusion soon.

Solih added that rather than focusing on bringing a particular candidate to power, the joint opposition’s aim would be to remove the current president and ruling party from power. He further stated that this was what the people wanted them to accomplish.

The vice chairman of the opposition discussion group and Jumhoory Party’s deputy leader, Abdulla Riyaz, announced that a second meeting would take place on Tuesday, and there would hold detailed discussions of the terms submitted by the four party leaders.