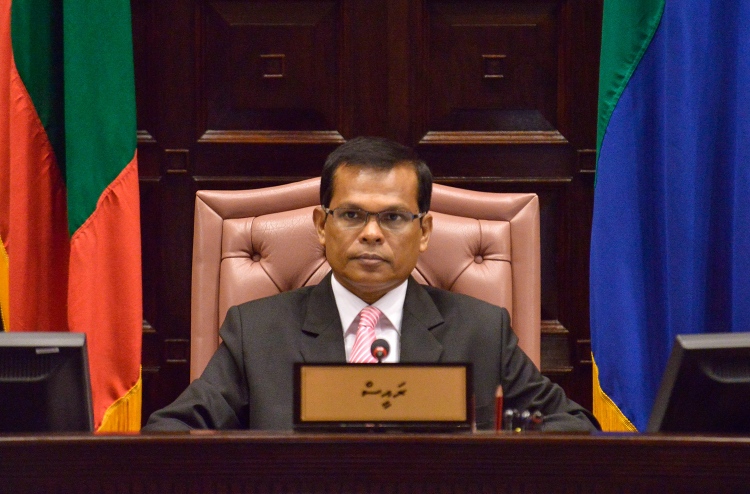 The original Dhivehi article was published on Vaguthu.mv website on 25th March 2017.

The coming few days will be politically very turbulent. On Monday People’s Majlis will decide on the motion filed for no confidence against Speaker Abdullah Maseeh Mohamed. Even though there is a clear majority of the government through PPM and MDA, it is a “political test” to face.

Speaker of the People’s Majlis Abdulla Maseeh Mohamed is a great football fan and always talk about football. Speaker Maseeh is one of the crucial ‘Forward’ players of ‘Captain’ President Yameen’s team. Playing within the government from behind, from center and creating attacks culminating in shots towards the goal, showing outstanding performance, one which is of praiseworthy.

Calmly playing without letting the rival team do much, in scoring goals Speaker Maseeh PPM, MDA’s PG group has been displaying an exemplary game.

Although there are few opposition members in the People’s Majlis, Maseeh didn’t have easy days as a Speaker.

Amongst the heckling, abuse, blowing of trumpets at the People’s Majlis, with his game plan Maseeh has managed to shift the gear of the Majlis to the seventh gear. Leaving no room to raise any questions about his exemplary performance.

Look at the statistics. From all tabled to People’s Majlis from 2014, 98.9% was concluded before the end of the last term.

People’s Majlis elected and commenced on 28 May 2014. Since then to the last meeting held last year among the 380 tabled, 376 were wounded up.

At this point, we can recall a statement by Maseeh when he addressed to the members during the last year’s third term. He said in that meeting, “In the Democracy, it is most sought at all times in all things for all to come together. If this not achievable then it has to be as the majority decides. Having no other option it has come to this conclusion. Therefore, if there is a fault in the decision of the majority then we should see that this is a deficiency in Democracy at the time.”

Democracy is governed by the principle that the majority rules in the decision making. Democracy cannot be what President Maumoon or President Nasheed or Gasim Ibrahim only wants. Democracy cannot be strengthened without respecting the democratic principles. The big picture is very clear even though you want to get rid of the person who doesn’t do as you want.

The problem isn’t Maseeh. The opposition knows that if the government calmly goes ahead then the government will keep on scoring goals. Therefore they are trying to force the government to change their team’s most important player to avoid the embarrassment the opposition may have to endure through scoring of own goals.

The opposite team’s manager, coach and assistant coach and players know that if they don’t stop the government team that supporters will come out and remove them from their posts. If they cannot achieve it by playing, they will do so by a foul play. However, we see that the opposite team have neither the skill nor the strategy to defeat the government team either by a playing fair or even through foul play. They lack talented players.

The result is very clear when we look at the two teams preparatory work for the game, game plan, and with the players list, they will announce. The forthcoming match is a match where Maseeh will score from the bench. PPM and MDA teams will easily win this game for the government. The opposite team doesn’t have the capability for a counterattack to score a goal against the government.

Ready to be cooked ??