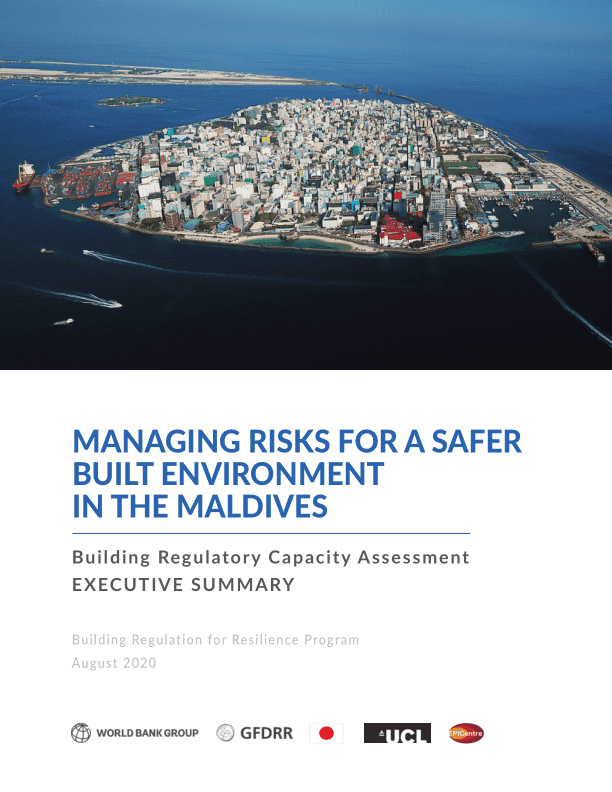 The Accumulation of Risk in the Built Environment in the Maldives

The Republic of Maldives includes 1,192 small, low-lying islands grouped into 26 atolls that together form a chain over 820 km in length, over an area of more than 90,000 square km in the Indian Ocean.
However, the total land area in the Maldives is less than 300km2. This makes it the smallest country in Asia in terms of land area as well as in population.

Each island is appointed to a particular use: 188 islands are designated for habitation; 109 islands are for tourist resorts, and 128 islands are dedicated to industrial use. Of the inhabited islands, only 33 have a land area greater than 1km2, and 67 have a population of fewer than 500 people.

The total population of Maldives is 407,660 (2014 census). Over 100,000 people live in the capital city Malé, which is on an island 1km by 1.7km. The urban population of the Maldives is expected to more than double by 2025. With an urban growth rate of about 5 per cent a year, the country will go from predominantly rural to predominantly urban within a generation. However, this growth is not homogeneous across all atolls: urbanization is expected to be concentrated on the reclaimed island of Hulhumalé, as well as designated Urban Regions in the outer atolls (to be defined in the Maldives National Spatial Plan 2020-2040).

This urbanisation has the potential to improve economic opportunities. However, there are also several challenges associated with this shift and concentration of population. Malé has transformed into an agglomeration of densely packed high-rise buildings, resulting in a greater incidence of fire and unsafe construction practices that have recently resulted in several injuries and fatalities. The atolls are also seeing an increase in medium- to high-rise buildings, and with unregulated labour and limited local authority capacity for inspection, the structural integrity of buildings and the safety of occupants is 1   C. Hague (2015). “The Maldives — Challenges for Sustainable Development in a Small Island State.” being compromised. Furthermore, to relieve stress on land availability on inhabited islands, there has been a strong increase in land reclamation, which has a potential impact on coral reefs and the environment.

The Maldives is vulnerable to several natural hazards, the prevailing ones being meteorological (i.e., tropical cyclones and storms, thunderstorms, heavy rainfall, and drought) and hydrological (i.e., floods induced by heavy rainfall, storm surges, swell waves, and udha) in nature. The low elevation of the islands above sea level makes them particularly vulnerable to coastal flooding, events that are worsened by climate change. The Maldives also has a low risk to earthquakes and is vulnerable to distal tsunami.

The Maldives is currently in a transition phase. It has moved away from heavily centralised governance towards devolution and decentralization of decision making to island level and multi-party elections.

A stronger and more wide-ranging legislative framework is one consequence of this transition.

Given the rapid urbanisation and high vulnerability of the Maldives to natural hazards, regulatory decisions made now will have a significant impact on the longterm safety, productivity, and resilience of the urban built environment.

To facilitate the construction of safe and resilient buildings, comprehensive and effective building regulatory frameworks are needed. The components of a building regulatory framework, including building and land-use regulations, enabling legislation, and local compliance mechanisms, function together to ensure that a particular building, on a particular site, achieves minimum levels of performance and resilience.