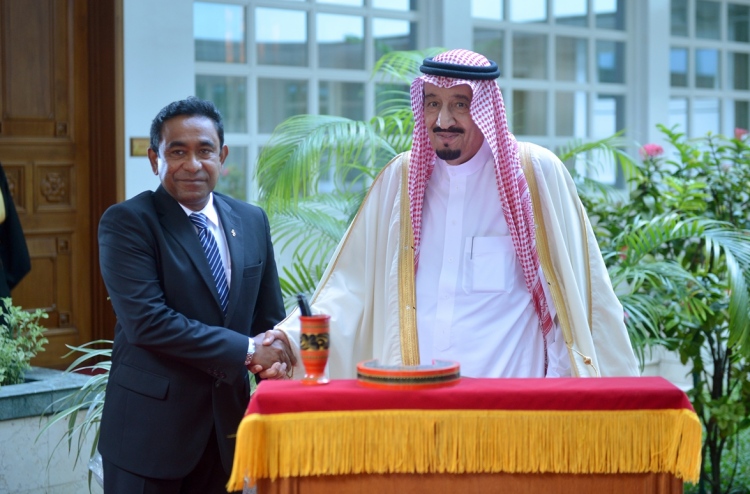 King Salman of Saudi Arabia (R) greets President Yameen during his visit to the Maldives as the Saudi crown prince. PHOTO/PRESIDENT’S OFFICE

President Abdulla Yameen Abdul Gayoom on Tuesday assured King Salman bin Abdulaziz of Saudi Arabia that the Maldives remains in solidarity with the Arab kingdom in its endeavours to establish regional peace.

President Yameen gave his assurance to the Saudi monarch in a message condemning the actions of Iran-backed Huthi rebels in Yemen, who launched a ballistic missile at the Saudi capital of Riyadh on Monday. The president stated that he received the news with great shock and harshly denounced the attack.

The Saudi military had successfully intercepted the missile, which was launched from Yemeni territory, before it reached the capital.

Describing it as a cowardly act of terrorism, President Yameen condemned the attack with the harshest words, in the name of the Maldivian government, citizens and his own.

The Huthi rebels of Yemen had launched a ballistic missile at Riyadh last May as well, just one day before US President Donald Trump was scheduled to arrive in Saudi Arabia on his first official visit. The missile was intercepted 200 kilometres outside of Riyadh.