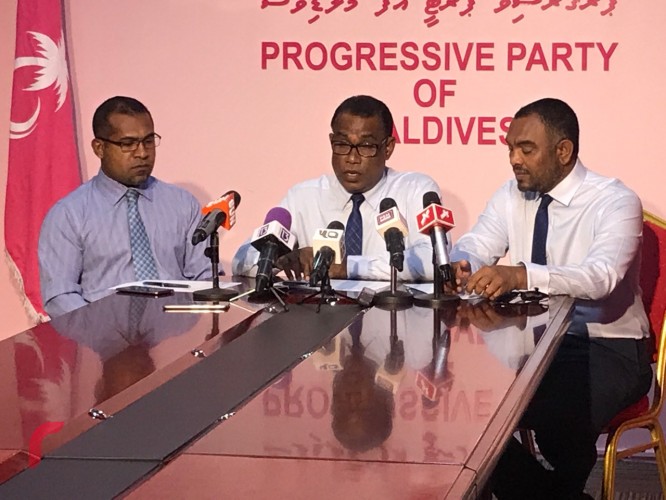 Senior figures of the Y-faction of PPM in Tuesday’s press conference — Photo by: Shahubaan Fahumee

The breakaway Y-faction of ruling Progressive Party of the Maldives (PPM) has threatened legal action if the Party’s name is not removed from the statement issued by opposition parties condemning the en masse suspension of lawyers.

Speaking in a press conference in PPM Offices on Tuesday, the faction’s Deputy Leader Abdul Raheem Abdullah said they had sent letters to opposition parties and former President Maumoon Abdul Gayoom to remove the Party’s name from the statement.

He also said the opposition had a deadline of 3 pm on Tuesday to remove the name. If they fail to do so, Abdul Raheem warned they will instate legal action. He said the case will be lodged with the relevant agencies, with copies of the letter already sent to the said bodies.

Speaking on the issue of suspension of lawyers, Abdul Raheem said the state bodies have a legal mandate to take action if illegal acts are perpetrated in the nation. The lawyer’s suspension, he said was legal and justified.