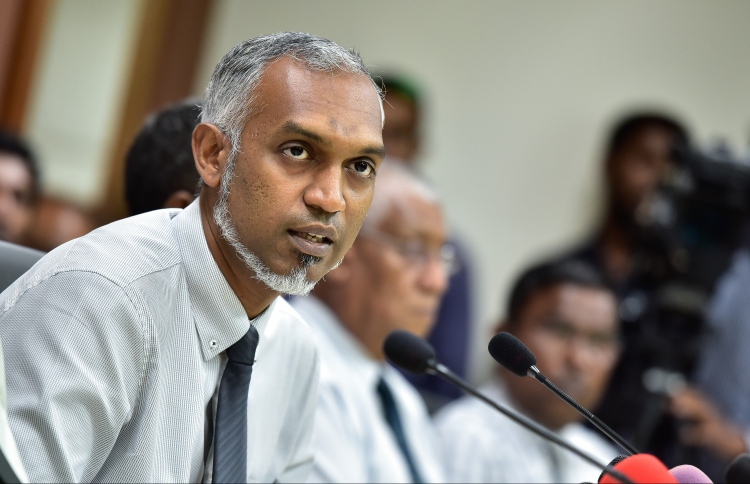 The monthly rent of the 661 flats to be leased under the government’s first social housing project is MVR 6,000 with a down payment of MVR 25,000, announced the Minister of Housing and Infrastructure Dr Mohamed Muizzu on Wednesday.

Over 15,000 people had applied for flats from the government’s first housing project in Hulhumale. The housing ministry announced 661 recipients from Categories 1 and 2 earlier this month, and released a final list of recipients this Tuesday.

Speaking at a press conference held at the housing ministry, Dr Muizzu revealed that flat recipients can claim ownership of their flats in 25 years, paying a monthly rent of MVR 6,000. The ministry will also make other arrangements for flat recipients who wish to pay off the lease earlier.

Housing Minister Muizzu noted that previously flats from Hulhumale were leased for MVR 7,000 per month, thus making this batch of flats the cheapest to date.

The ministry will also take steps to make sure that the tenants who move into the flats are the recipients and their families before drawing up an agreement, the minister warned, referring to previous cases where flat recipients had leased their flats to other parties for higher rent fees.

The ministry had discovered that several people in the initial list of recipients are spouses, which is the main cause of the changes to the final list. Under the housing ministry’s policy, married couples will receive only one flat even if both applicants’ forms are chosen.

Minister Muizzu explained that with the deduction of married couples, 19 slots had opened up in Category 1 while another flat opened in Category 2.

The ministry has also confirmed flats for more people based on the complaints they had filed, and the number of points they received during distribution. In this effect, 16 more recipients are confirmed to receive flats from Category 1 while eight are confirmed for Category 2.

Furthermore, upon reviewing the 15,000 application forms again, the ministry has decided to give a flat from Category 1 to an applicant with a disability, while eight applicants with disabilities received flats from the second category.

The government had given special priority to people with disabilities or special needs in flat distribution this time, the ministry highlighted. Total 103 such applicants received flats from Category 1 while another 64 received from Category 2.

Each and every complaint considered: minister

According to Dr Muizzu, the housing ministry received 2,900 complaints regarding the contentious flat distribution by last Sunday.

The public had been in an uproar ever since the housing ministry announced recipients for the 661 flats earlier this month, since the government had chosen to withhold the identities of the recipients or how points were allocated among the applicants. While several people, along with the opposition, allege that there is graft involved in the distribution of flats, the government maintains that flats were given fairly, and to the neediest.

Speaking at the press conference, Minister Muizzu proclaimed that he had read each and every one of the complaints filed at the ministry.

“They will receive answers [to their complaints] today or tomorrow. The final list was compiled after taking their complaints into account and after looking into whether we had missed anything,” he said.

The minister declared that all 15,000 applicants were deserving of the flats, but the first batch were given to the neediest. He assured that the government will conduct more social housing projects for which those disqualified in this round, along with new applicants, can apply again.

The government had recently announced that it will be developing 7,000 more flats this year, while another 8,000 are planned for 2018.