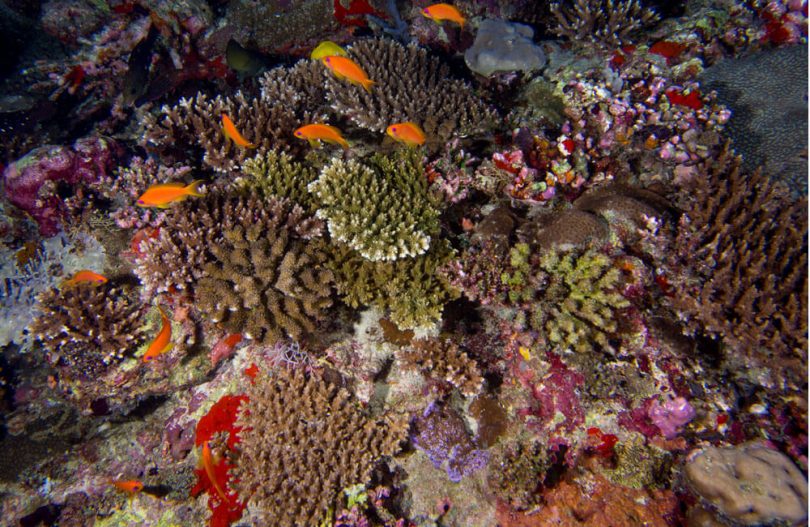 US-based research group Coral Reef CPR, who have been studying a multitude of locations throughout the Maldives, report that some regions have demonstrated a remarkable resilience to elevated water temperatures, whereas others have been subjected to stress from other causes.

Bleaching in the Maldives was first reported in 2015, but most areas rebounded quickly. As the unusual weather patterns associated with an El Niño event persisted throughout 2015 and worsened in 2016, reefs bleached again. Coral Reef CPR measured the temperatures at a depth of 10m in lagoonal, channel and outer reefs on Baa Atoll and South Malé Atoll and found them to be abnormally high, and steadily increasing between March and April that year. 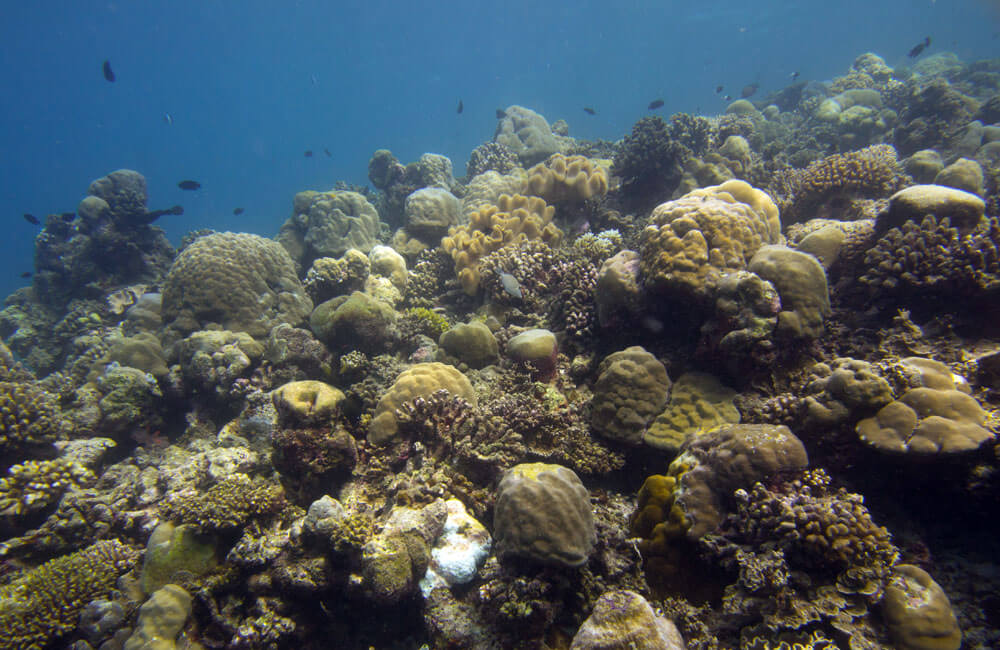 Temperatures on exposed outer reefs ranged from 32-33° C, while lagoonal reefs climbed to 35° C and higher, which was 2-5° C above the normal annual maximum. Using a highly accurate Castaway CTD (hand-held, deployable temperature meter), the team also measured temperature profiles from the surface to 40m of depth which showed a complete breakdown of cooler deep currents and absence of a thermocline. They reported that at the same time, ‘the surface of the sea was like glass and the water was gin clear,’ allowing for a greater penetration of harmful UV radiation. ‘Together,’ wrote Dr Andrew Bruckner of Coral CPR, ‘these conditions were a recipe for disaster.’

According to their research, Coral Reef CPR found that bleaching of the most sensitive corals started in March 2016, and by mid-April entire shallow reef systems throughout the country were stark white. Some corals resisted bleaching initially, especially the massive boulder corals (such as Porites), but the water continued to warm. By the time the summer monsoon finally kicked in during mid-May, nearly every coral was either fully bleached or a vivid fluorescent colouration (yellow, purple, red or blue) as the coral animal produced photo-protective pigments to shield its tissue from too much sunlight.

Bleached coral can recover if environmental conditions return to normal relatively quickly, but the prolonged duration of the 2016 bleaching event overwhelmed many of the more sensitive species. Shallow lagoonal reefs, ‘reef flat’ and ‘reef crest’ communities above 5m depth sustained catastrophic losses, with up to 80 to 95 per cent loss of coral in the hardest hit areas, particularly the dominant branching and table acroporids.

To gain more insight on the country-wide extent of bleaching impacts, Coral Reef CPR surveyed more than 80 reefs on eight different atolls in central and northern Maldives. While most emergent reefs in both fore reef and lagoonal areas had become ‘a graveyard of coral skeletons’ by August 2016, not all reefs were equally affected and even the hardest hit areas had survivors. 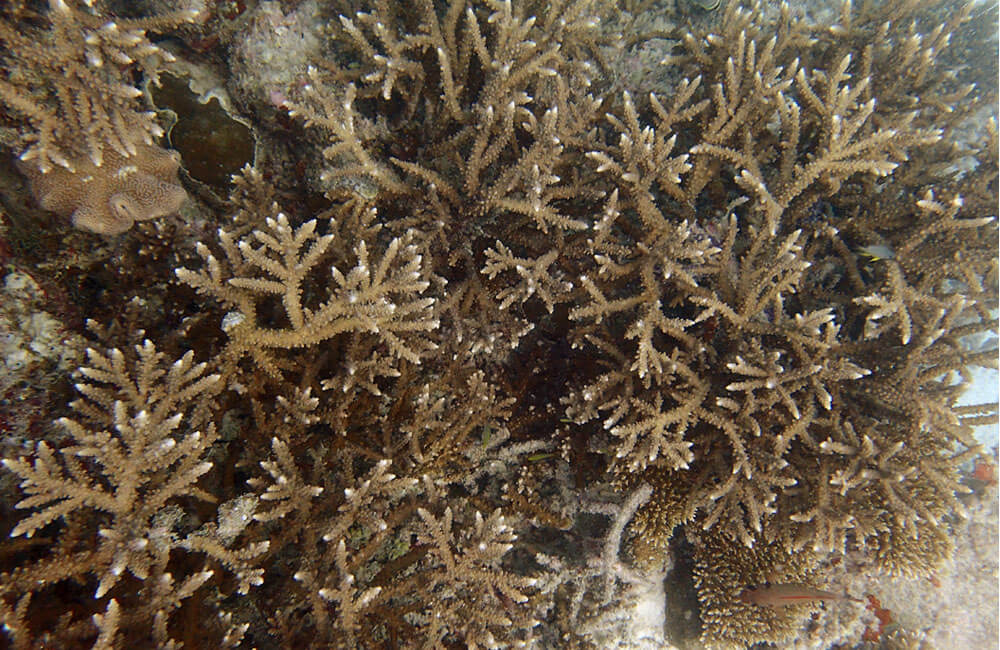 Acropora species at a ‘coral refuge’ in South Male, August 2017

Pocillopora, another common form of branching coral, showed a higher survival rate in the shallow reef flats losing between 50 to 75 per cent of its cover – a large percentage, but significantly lower than other species. Other reefs throughout the country, especially those in outer exposed areas and submerged deep reefs which were dominated by massive boulder corals as opposed to the more fragile acroporids, lost between 10 to 20 percent of their corals, a much higher rate of survival.

Although initial observations suggested that the situation was ‘ominous’, Coral Reef CPR found that a more detailed examination of the reefs yielded a number of positive surprises. Of particular significance were individual colonies of certain species that failed to bleach, despite being located adjacent to other colonies that had fully bleached. Some of the corals produced vivid fluorescent pigments, which appeared to offer protection to these colonies.

The team found that some reefs provided a refuge from the bleaching, with high numbers of surviving corals on channel reefs and submerged reefs known locally as ‘thillas’ where there is much more water movement. Coral mortality was also found to be reduced on outer reefs that are exposed to high wave action. These areas still lost most of their branching and table corals, but they are dominated by boulder corals, especially massive Porites corals which are much slower-growing and tend to be long-lived, with some colonies estimated to be between 500 and 1000 years in age. Although many of these larger corals appeared to lose some tissue, very few of them actually died, and the team began to see signs of tissue recovery, observing that all the reefs considered to be bleaching ‘refuges’ had high numbers of boulder corals as well as the more fragile branching and plating acroporids.

Many of the Maldives’ atolls, especially on their western side, have small islands that contain their own lagoon, forming a structure that resembles a micro-atoll. These lagoons tend to be fairly shallow at only 5-15m deep, and the sandy bottom is covered with hundreds of small coral bommies and patch reefs. These areas often support unique, unusually large boulder, plating or foliaceous (leaf-like) corals that form the framework of the reef and are colonized by a high diversity of corals, especially acroporids. Within these areas, Coral Reef CPR  identified more than 30 species of Acropora that survived the 2016 bleaching event. These environments tend to have lower visibility, which may explain why they provided a refuge from bleaching. 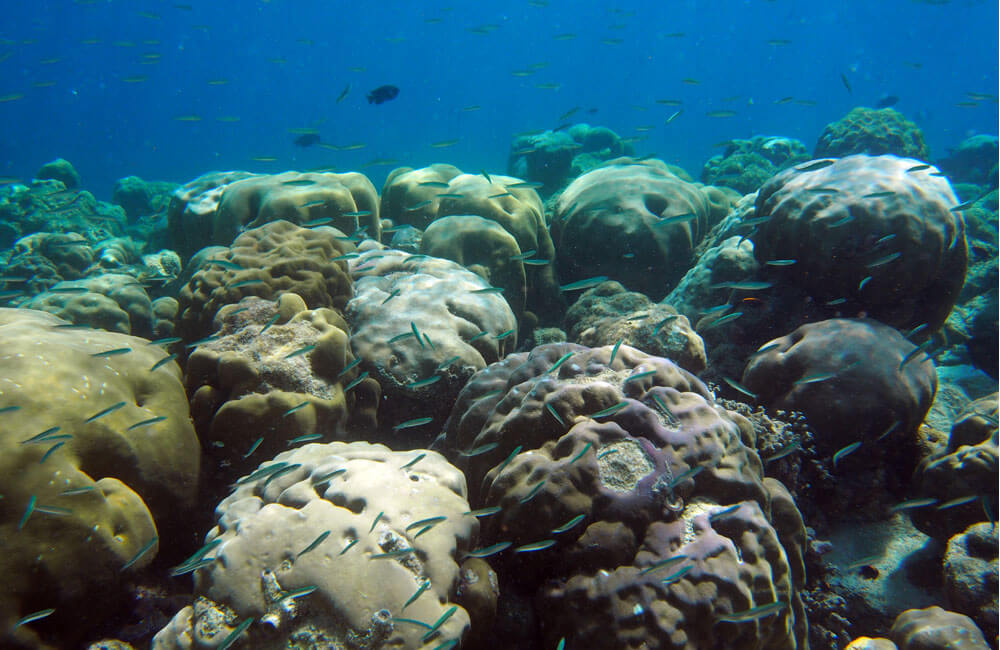 In all reef environments, the team found much higher survivorship of corals on reef slopes. In many cases, the steep part of the slope was littered with hundreds of broken Acropora branches, fragments that had been detached from larger colonies on the top of the reef and carried down the slope. The base of these reefs contained larger, intact, branching, digitate (finger-like) and table acroporids in good condition.

Remarkably, the studied sites had unusually high numbers of coral recruits and one to two-year-old juvenile corals that had resisted bleaching. These included most of the acroporids and other species that sustained very high mortality during the 2016 bleaching event. Dr Bruckner notes that the presence of these corals provides evidence that coral reefs in the Maldives are still very resilient and are likely to recover quite quickly.

‘Reading some of the recent negative reports from the Maldives highlights some of the gaps in understanding, variations between reef survey techniques and importance of evaluating a large number of reefs and not drawing conclusions from a small sample size,’ reports Dr Buckner. ‘This is particularly important as the geological foundation of the islands and reef systems of the Maldives does not permit small sample sets of data to be extrapolated for the whole country.’

The Maldives contains a large number of reefs which are distant from populated areas, however, there is a great deal of concern regarding environmental degradation associated with a recent ‘building boom’ around the islands. The team also found that other reefs, especially those around North Malé Atoll and Ari Atoll have been badly damaged by a severe outbreak of crown of thorns starfish (COTS), cushion starfish (Culcita sp.) and coral-eating snails (Drupella sp.). This outbreak of ‘corallivores’ began prior to the bleaching event in 2016 and has continued after the bleaching ended, causing the loss of coral to be misinterpreted, according to Coral Reef CPR. 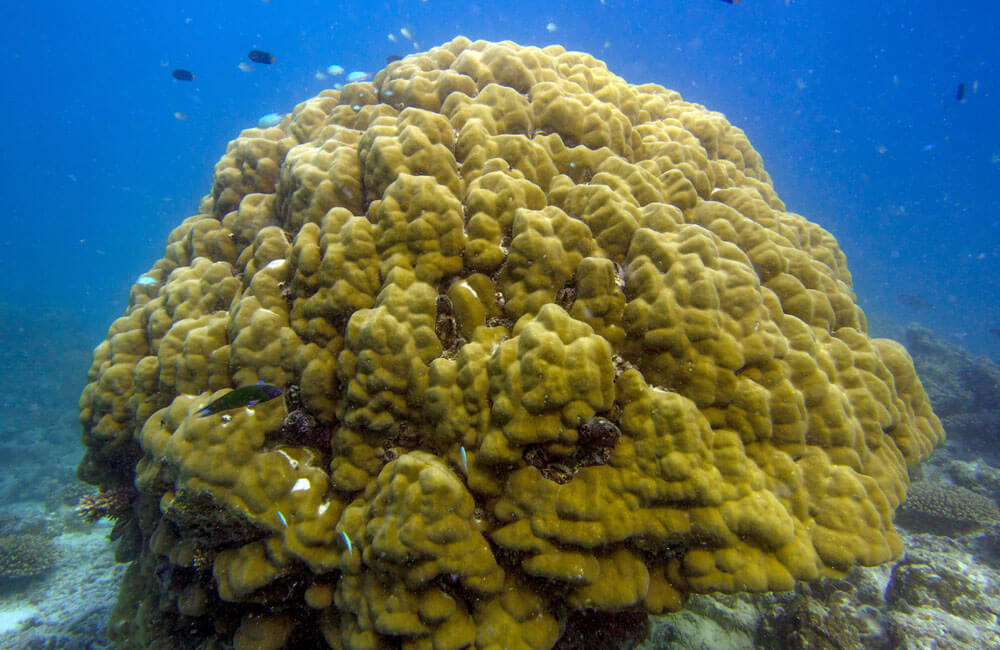 ‘During 2017,’ writes Dr Bruckner, ‘a number of other marine biologists told us about reefs that are undergoing bleaching again. However, when we examined these locations, the damage caused by the corallivores was misinterpreted as bleaching and, further, our temperature meters and NOAA satellite data have recorded temperatures that are within the normal range.’ Noting that some observations may have been carried out with non-scientific equipment, he adds that ‘we strongly discourage the use of recreational diving computers as a measure of accurate water temperature.’

In conclusion, Dr Bruckner writes that ‘there have been large scale changes to the reef systems throughout the country as a result of the 2016 coral bleaching event, and these have been compounded locally by other human and natural stressors. However, these reefs show multiple signs that indicate they are resilient to these stressors, and in absence of high numbers of corallivores and unsustainable coastal development and other human impacts, they are undergoing rapid recovery.’