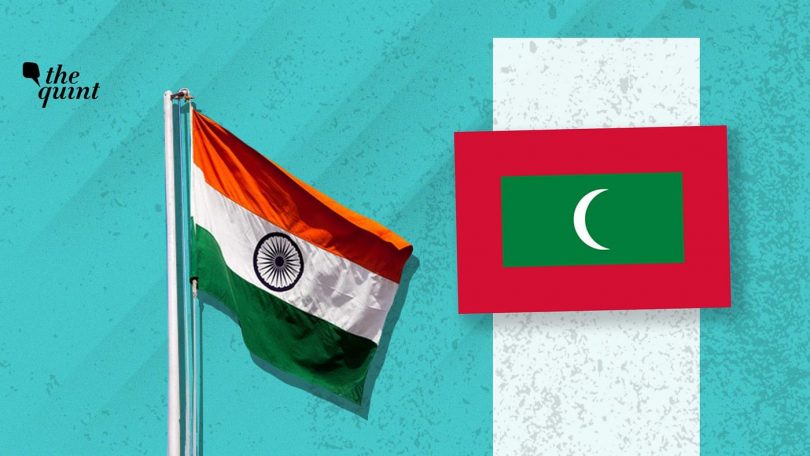 Indian Foreign Secy Shringla’s Maldives visit is in the backdrop of an ‘India Out’ campaign by Maldives’ Opposition.

On 2 November, a newborn baby in the northern Maldivian atoll of Addu developed critical complications and had to be flown to a hospital in capital Malé for urgent treatment. The Dornier aircraft gifted by India to the Maldives National Defence Force (MNDF) was pressed for the first time into evacuation action at 4 AM, and the critical baby and mother are now safe and healthy.

A medical evacuation of Newborn baby, in critical condition has been carried out from Addu City to Male’ City by MNDF Southern Command via MNDF Dornier flight tonight at 04:02 hrs. pic.twitter.com/WR59yK5OlG

The two Advanced Light Helicopters, also gifted by India previously and the subject of a political storm with the previous Yameen government, have so far conducted more than 250 emergency medical evacuations including that of an 89-year-old man in critical condition just this week. These are the very helicopters that the former President and now jailed Yameen wanted the Indian government to take back as bilateral relations worsened in 2018 with China, a key player in the political chess game.

The only three birds in the Maldivian defence forces, all provided by India, are key to HADR, medical emergencies, reconnaissance and surveillance of the EEZ, as well as counter drugs and narcotics, illegal fishing and counter-terrorism operations.

Since the surprise election win of President Ibrahim Solih two years ago, bilateral ties have seen a significant turn around with India now keen to be seen as a strategic reliable partner that follows up on agreements and projects on paper and also delivers them on time, contrary to its track record with smaller neighbours in South Asia.

Maldives meanwhile, though cautious about not making any anti-China statements, is batting steadily for its ‘India First’ policy.

The just-concluded the visit of Indian Foreign Secretary Harsh Vardhan Shringla to the approximately 900 km Long Island nation, located strategically in the heart of the Indian Ocean, is important because of its timing.

Amid a pandemic, Shringla has so far visited Myanmar, France, Germany and the United Kingdom, before heading to Maldives, weeks after Foreign Minister Jaishankar held virtual consultations with his counterpart, Abdullah Shahid, in mid-August.

In his 48 hours of visit, Shringla called on President Solih, Speaker Nasheed, and also held discussions with 8 Cabinet ministers and all Opposition leaders – the first high-level Indian visit this year in the middle of a global pandemic.

“India is delivering on its commitment to the Maldives by way of development cooperation and emergency COVID support. We have always been the first responders, which got reiterated and confirmed. The high-level contact is important to go with the intensity of this relationship,” said Indian Envoy Sanjay Sudhir, speaking from Malé.

On 12 October, India signed an agreement to extend USD 400 million Line of Credit for connectivity projects in the island nation that has witnessed a crippling effect of the pandemic on its tourism revenues. Additionally, India has also extended a USD 100 million grant, towards building bridges and causeways to help link the country’s mainland capital to the many small islands and atolls and a 250 million USD toward budgetary support to mitigate the socio-economic impact of COVID.

In 2012 it was a USD 500 million borrowing from China by the then Waheed Government that kicked off a series of Chinese debt traps, and active influence of Beijing in Maldivian domestic politics.

In 2018, as the democratically elected government of Solih came to power, India gave a USD 1.4 billion loan to Maldives to offset the Chinese borrowings.

Malé once again faces debt repayments obligations start of next year. It is wary of a possible first defaulting on the opaque Chinese loans and investments in economic and infrastructure projects that increased during Yameen’s time, which also saw a controversial Free Trade Agreement bulldozed in Parliament.

Contrary to the Chinese projects, India has allowed Maldives ownership and inclusiveness in its investments with due process of floating of tenders and calling in for bids.

At a public event held in the National Stadium, where Foreign Secretary Shringla handed over children’s parks for 67 Maldivian islands panning from north to south, 60 of the 87 members of the Majlis (Parliament) were in attendance.

Among some of the visible timely Indian deliverables today aimed at benefitting common people are:

Are India’s Ties With Malé A ‘Model’ For Other Neighbours?

In signs of changing times, Foreign Secretary Shringla, during his visit, also reiterated India’s support to Foreign Minister Abdulla Shahid’s candidature for the Presidency of the 76th session of the UN General Assembly next year. Currently, the chair is with Turkey, and India is hopeful that Shahid will win the responsibility coinciding with its own membership of the United Nations Security Council for 2021-2022.

In 2018, when Maldives contested for a non-permanent seat on UNSC during Yameen’s regime, it managed to secure only 46 votes of the 190 participating member states. India opted to vote for Indonesia instead, despite a 10-year-old promise to support Maldive’s election bid. The move was seen as a punitive measure to punish Yameen for his proximity to Beijing.

“Foreign Minister Abdulla Shahid is not only capable but a seasoned diplomat. We supported the Maldives in rejoining the Commonwealth earlier this year. We support Maldives’ membership of IORA (Indian Ocean Regional Association). We want it to play a larger role in international organisations and have a higher profile to give an important thrust to especially on issues like Climate Change,” says Sanjay Sudhir.

Former ambassador Mohan Kumar who headed the Maldives desk and is Chairman of RIS, in a recent article, argued that India’s relations with Malé are ‘a model for ties with other neighbours’.

Ties though are not without rumblings. Shringla’s visit comes at a time when ‘India Out’ campaign, spearheaded by the Progressive Coalition of Opposition PPM (Progressive Party of Maldives) and PNC (People’s National Congress), has been in the news – with a massive anti-India rally held in the capital in late August in the Indian Ocean archipelago, and an emergency motion filed in October in the Majlis, seeking details of a pact between Indian and Maldivian militaries.

The motion though was dismissed by Speaker and former President Nasheed who meanwhile has been accusing his party colleagues of corruption, allegations that India considers the internal matter of Maldives and has chosen to not comment on.

But even with Yameen lodged in jail, New Delhi continues to have open dialogue with the Opposition to ensure political transparency.

Shringla’s nearly hour-long meeting with the  Opposition delegation of leaders like Waheed, Dr Jameel and others who were mistrusted, exiled, jailed by Yameen in the past, prior to subsequent reconciliation, was an effort towards the same.

For Maldives to be able to keep the waters safe and secure from contentious issues and power games, domestic politic stability must continue.

The power games will play out with America now the 10th country that will open its embassy in the small island nation after 54 years of diplomatic ties, with an eye on Chinese expansionist presence in the region. And India must not lose sight of its financial, humanitarian assistance and scheduled completion of promised projects as a long term strategy to ensure the Maldives finds lesser reasons to sail in two boats.

(Smita Sharma is an independent journalist and tweets at @Smita_Sharma.This is an opinion piece. The views expressed above are the author’s own. The Quint neither endorses nor is responsible for them.)