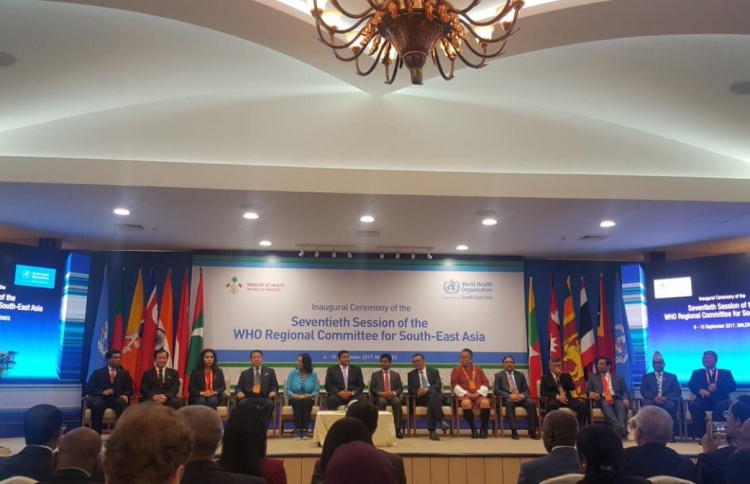 The delegates taking part in the Seventieth Session of the WHO Regional Committee for South-East Asia, 2017. PHOTO / HEALTH MINISTRY

Top health-officials from 11 countries in the South-East Asian region, along with officials from WHO, are taking part in the committee that will go on for four days.

WHO’s Goodwill Ambassador for Hepatitis, Blooywood megastar Amitabh Bachchan, is also due to address the committee meeting in the coming four days.

Much like every other thing that happens in the Maldives, the WHO meeting was politicised even before it commenced.

With the announcement that the Bollywood legend will be coming to the Maldives for the committee meeting, opposition parliamentarians had urged Bachchan to boycott the trip due to the ‘government-initiated’ human rights violations taking place in the country.

Opposition Galolhu-South MP Ahmed Mahloof took to Twitter to tell Bachchan that Maldivians have been deprived of their “constitutional rights and freedoms”; and this call was echoed by all opposition leaders. Soon, there was an opposition-backed social media campaign calling Bachchan to boycott his trip.

The Myanmar delegate (R) at the Velana International Airport —

Then, the news of Myanmar’s health minister taking part in the committee meeting stirred the bubbling pot even more.

The Myanmar government was recently accused, even by the United Nations, of an “ethnic cleansing” of the Rohingya Muslims in the country.

The Muslim community all around the world condemned the genocide against the Rohingya by the country’s military, and the Maldivian government on Sunday announced that it would be severing all economic ties with the country.

A great proportion of the Maldivian public was hostile to welcoming anyone affiliated with the Myanmar government and many took to social media to express their outrage.

Amidst the controversy, it was revealed on Wednesday that neighbouring India’s health minister Jagat Prakash Nadda, who was due to take part in the meeting, had cancelled, and P.K. Mishra, the Additional Principal Secretary to the Prime Minister of India, is taking his place instead. No official reason for his cancellation was cited.

Further, despite the scandal, it was revealed that a delegate from Myanmar had, indeed, taken part in the WHO meeting.

Although it was not the health minister, the health ministry’s director had taken part in the meeting on Wednesday. Opposition claimed that welcoming a delegate from Myanmar, while a trade embargo is already in place, is essentially “supporting” the atrocities taking place in the country now.