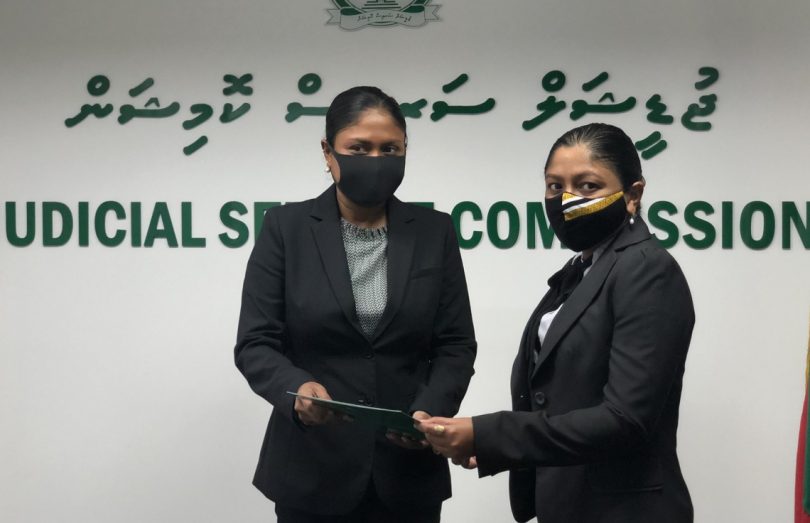 Dheebanaz’s appointment marks the first time in Maldives’ judicial history that a woman was appointed as a Criminal Court Justice.

According to a statement by JSC, both judges were sworn in by Supreme Court Justice Husnu Al Suood during a special ceremony held at the commission.

The judicial watchdog disclosed that Dheebanaaz and Misbah were “highly recommended” by the advisory committee established to interview and provide counsel to JSC regarding judicial appointments.

With 17 years of experience under her belt, Dheebanaaz Fahmy, who was also the first female Deputy Prosecutor General, is well-versed in the field of criminal justice.

The highly reputed lawyer holds a Bachelor of Law with honours from International Islamic University Malaysia and a Masters of Law from the New Zealand’s University of Canterbury. Dheebanaaz has also extensively taught and trained lawyers, as well as other professionals, on various aspects of the law.

She was previously managing partner at Munavvar and Associates, from 2016 to 2019, where she worked alongside former Attorney General of Maldives, Dr Mohamed Munavvar. Dheebanaaz credits Munavvar as being one of her key mentors, since her time at the Attorney General’s Office in the year 2000 and onwards.

Dheebanaaz comes from a long line of contributors to the legal field. Her father Ahmed Hameed Fahmy is a retired Justice of the High Court and her grandfather Abdulla Jalaaluddin served as the Chief Justice of Maldives.

Mohamed Misbah completed his Bachelor of Sharia and Law from Egypt’s Al Azhar University and served in the judicial sector for six years. During his legal career, he has worked extensively both in public prosecution and private practice, as well as a lecturer.

The Criminal Court welcomes its first female judge at a time when public ire stands at an all-time high, incensed by an upsurge of cases reported in 2020 as well as the government’s continued meagre record of arresting and convicting perpetrators of sexual offences, despite making numerous pledges to support the rights of children and women and ensure the safety of all.