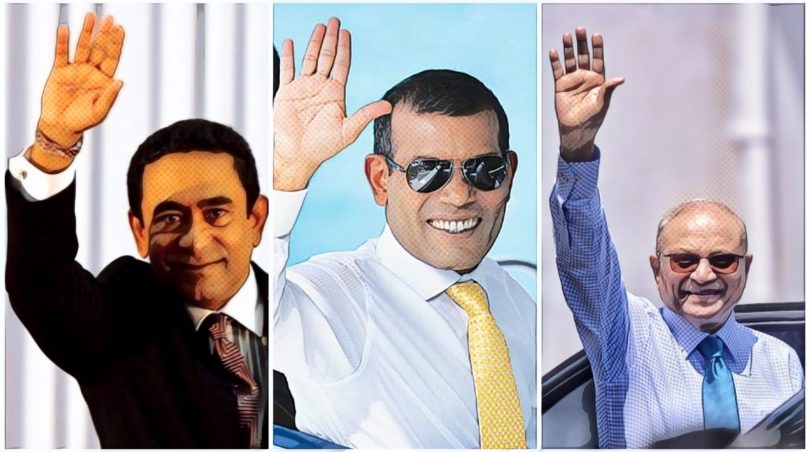 The original Dhivehi article was published on Vaguthu.mv website on 20th August 2017.

In most Bollywood movies, the villain will be the one to mastermind everything, brainwashing the people around him, manipulate them to execute plots, which the villain will ultimately enjoy the sweet reward of. Likewise, part of abusing the hero who is in love with the villain’s daughter or relative will also be handed over to his gang people. The hero will find out that all such evil acts are authorized by his lover’s father or uncle only in the last fight scene of such Bollywood movies.

In the Bollywood movies that President Maumoon watched, where the hero wins, there would also emerge among the villain’s gang, his defiants. This is also part of the last fight scene. Whilst those who emerge out betraying the villain would have done so also after making sure every bad deed they have committed was framed at the villain. Finally, they would have taken hostage villain’s wife and children. Now the movie is close to ending. It is the last 10 minutes of the movie. The hero and the hero’s mother will be taken somewhere up high and tied up. If there is a child, then the child will be left hanging (on something).

Now approaches the climax of the movie. The villain will be escaping every attack launched by the hero while trying to rescue all the hostages. Only then will the villain come to the realisation of what is happening. Followed by in the next scene where the villain’s traitors will be holding a gun at the wife, at children or at the hero’s head. During this fight scene, after having the revelation the villain will become good, and in order to save the hero, he will step in front of a gun, get shot at and will die. Instantly the police will arrive with sirens blaring at the scene, barge in and arrest all the remaining villains. Then the scene will close, since the hero won.

In those Bollywood movies that President Maumoon referred to, there won’t be many cronies around the hero. The hero will always strive to do and accomplish things within the law all by himself. No matter how things go, the hero even by on his own, will go face the villain and his cronies, defeat them and gain victory. Also, in some Bollywood movies, after witnessing the hero’s sincerity and his bravery, few people in the villain’s team will join the hero, out of newfound respect.

The ongoing ‘movie’s’ hero is obviously President Yameen. This is a fact everyone knows. As President Maumoon has said, similar to the hero who wins in the Bollywood movie, President Yameen will win when the ‘movie’ ends. Even now we are witnessing scenes from a movie like President Maumoon mentioned. Even though, the opposition keeps saying the hero is is not good, they are incapable, making him look bad and just keeps constantly criticising his methods and policies, we are not hearing anyone comparing him to other leaderships and complaining about the developments and growth to the country brought upon by the ‘hero’s; efforts. The villain teams continue to talk about corruption and the legal courts prosecuting their cases. About how law enforcers are arresting them and trying them at court. While huge theft and corruptions have taken place in their respective governments or before, after taking office, there is no one on that side with the courage to investigate any of these allegations.