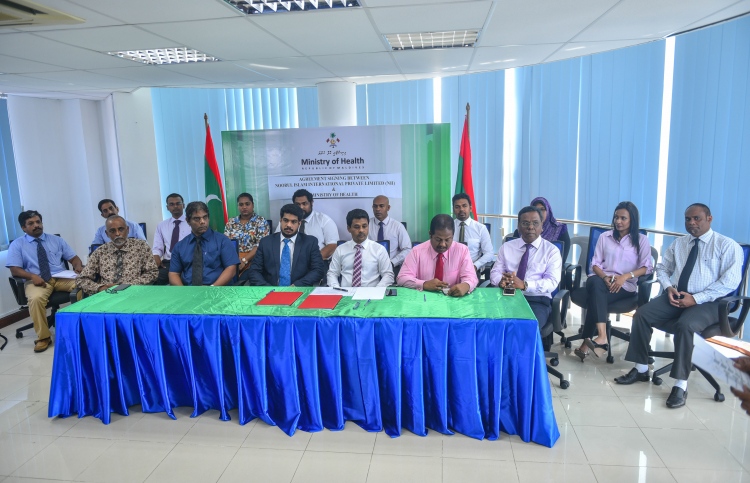 Officials of the Maldives’ health ministry and India’s NIMS Hospital at the signing ceremony awarding operations and development of Kulhudhuffushi Regional Hospital to the latter. PHOTO: HUSSAIN WAHEED/MIHAARU

The foreign operator of Haa Dhaal atoll Kulhudhuffushi island’s regional hospital has sent an official letter to President Abdulla Yameen, laying heavy accusations against the locals in charge of the hospital in connection with its deteriorating services.

The government had handed over management of Kulhudhuffushi Regional Hospital to the renowned NIMS Hospital of India on June 19, 2017, for a period of 30 years. Under the agreement, NIMS was to develop it into a multi-specialty tertiary hospital with 150 beds within a year and four months. The upgrade also meant offering services such as MRI and CT scanning, major surgeries, specialist consultancies, diagnostics, laboratory services and treatments for genetic disorders including bone marrow transplants for thalassaemia patients.

However, complaints eventually followed that NIMS was not adhering to the agreement and that Kulhudhuffushi Hospital’s services were declining, prompting the Maldives’ health ministry to temporarily take over the hospital’s reins last month.

With regards to the heated issue, M.S. Faizal Khan, the managing director of Noorul Islam International which operates NIMS Hospital, sent a 14-page letter to Yameen, detailing the “truth” behind NIMS’ failure to provide services as per the agreement.

Faizal Khan accused the locals currently in charge of running Kulhudhuffushi Hospital of causing various obstructions to NIMS. According to his letter, delays in opening a bank account for NIMS in the Maldives had compelled them to make transfers to the accounts of the hospital’s local directors. Faizal claimed that a total of USD 130,000 (MVR 2 million) over a period of six months was deposited in the accounts, and accused the directors of misusing the money.

Khan also raised concerns over the delays at Maldives Customs Service in approving expensive machinery sent by NIMS to Kulhudhuffushi Hospital. He noted that a CT scanning machine, which arrived on November 12, 2017, has been “stuck” at Customs for around two months due to delayed permissions, and raised suspicions that such delays were deliberately caused.

Noorul Islam International went on to disclose that it faced challenges in bringing in medicines and other hospital-related items to the Maldives due to delayed approvals. The letter specified that transactions between the company and Kulhudhuffushi Regional Hospital were at a halt and that there were delays in registering doctors, and issuing NIMS an import-export license and visas for doctors.

Other concerns raised by the company include hospital-related decisions allegedly taken by the local directors without discussing matters with NIMS, which was a violation of their agreement. Noorul Islam highlighted that the directors had used their influence to appoint certain people to positions without informing the company.

It further accused the local management of disrespecting and mistreating the staff sent by NIMS Hospital to Kulhudhuffushi and pleaded the authorities to investigate the matter and take relevant action. Noorul Islam alleged that all the obstructions were calculated and deliberate in order to portray NIMS as incompetent and subsequently terminate the agreement.